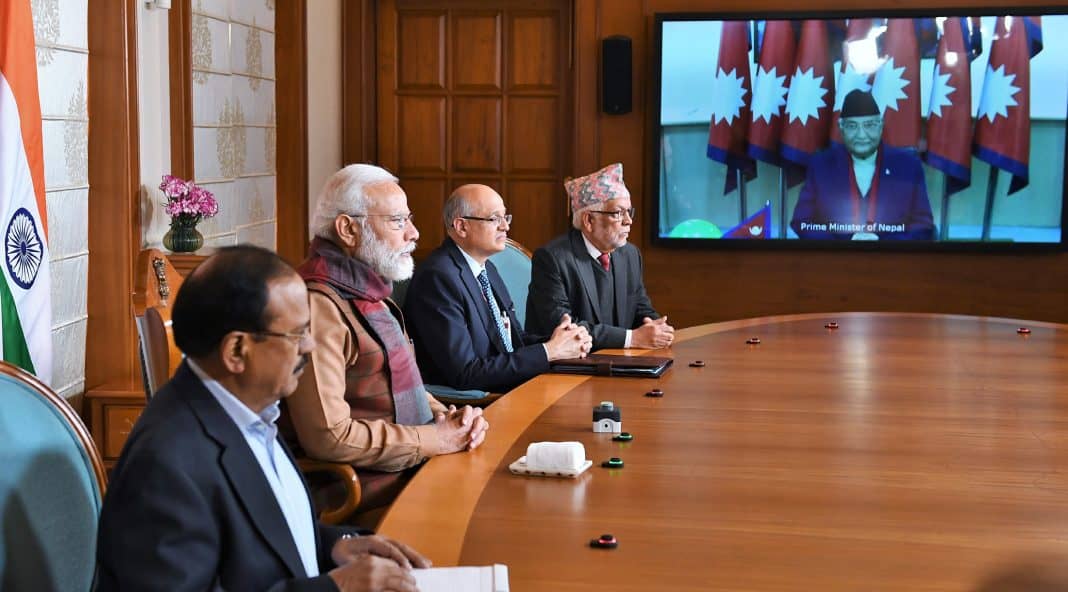 Nepal’s amendment of its Constitution to incorporate a new map with three Indian territories in it seems to be at the behest of China, which has increasingly gained a foothold there

It is easy to view Nepal’s recent enactment of a bill approving a new map of the country and emblem as an anti-Indian act. It showed a triangular sliver of 372 sq km in Uttarakhand—Limpiyadhura-Kalapani-Lipulekh—as part of Nepal.

Nepal Prime Minister KP Oli’s initiative to push the constitutional amendment bill is mischievous, to say the least. It is uncannily timed when India is combating twin threats: the Covid-19 pandemic and a brewing military confrontation with China after 20 Indian soldiers were killed after Chinese troops intruded across the LAC in eastern Ladakh.

There is a strong suspicion of China’s covert hand behind Oli’s moves. A day after the Nepal government enacted the bill to incorporate the three Indian territories in the new map and emblem, senior members of the ruling Nepal Communist Party (NCP) were attending a four-hour video-conference attended by senior members of the international division of the Communist Party of China, CPC Tibet Autonomous Region and NCP’s schools division headed by Deputy PM Ishwar Pokharel.

Some of the senior leaders of the NCP questioned the wisdom of organising the conference with the CCP at a time when ties with India are under strain and in the aftermath of the India-China border clash.

Last October, when India published a new map incorporating the division of J&K and Ladakh as Union Territories after a constitutional amendment, Nepal objected to it as it showed the Kalapani area as a part of India. The immediate provocation for Nepal’s move is said to be the inauguration of the newly constructed 80-km Mansarovar Road to Lipulekh in May by Defence Minister Rajnath Singh. Nepal objected to it as part of the road passes through the disputed Kalapani area.

The contested area has been part of India since Independence. It was shown as part of British India after Nepal signed the Treaty of Sugauli on March 4, 1816, after losing the first Anglo-Nepal War. The Treaty forms the basis of delineation and demarcation of Nepal’s western border with India along the Kali river. Article 5 of the treaty says that “the Raja of Nepal renounces for himself, his heirs and successors all claim to or connection with the countries lying to the west of the river Kali and engages never to have any concern with those countries or the inhabitants thereof”. Nepal claims that Limpiyadhura is the point of origin of the Kali river, and Kalapani territory, which has been part of India, belongs to it.

Nepal’s territorial claim has a long history and comes up periodically during elections when Nepal’s communist parties accuse India of illegal occupation. During the 1962 war, the Indo-Tibetan Border Police occupied Kalapani and continue to man the border posts. In 2015, the Nepal parliament objected to an agreement between India and China to trade through Lipulekh Pass, stating that trade through Kalapani violated Nepal’s sovereign rights over its territory.

The two countries formed the Joint Technical Level Nepal-India Boundary Committee in 1981 to demarcate the India-Nepal border. The Committee delineated 98% of the boundary, excluding the disputed territories of Kalapani and Sista and submitted the maps in 2007.  However, both countries have not ratified the maps.

Many Indians are peeved because Nepal’s relations with India are special and unique among all the neighbours, embellished by shared history and culture. The 1950 Indo-Nepal Treaty confers many privileges on the people of both countries—open borders, free travel and trade access, equal employment opportunities for Nepalis, and so on. However, over the years, Nepal has been demanding the revision of the Treaty in keeping with the growth of its aspirations to be treated as an equal in dealing with India. Nepal, like many other smaller neighbours, finds India acting as the “big brother” when it deals with issues impinging upon its own interests.

India wielded considerable influence in Nepal from 1950 to 1962. Nepal’s efforts to cut loose from India’s overwhelming influence started in 1973 when King Birendra proposed his country as a zone of peace, the main theme of his foreign policy. While many countries endorsed this, India, which had China and Pakistan as nuclear neighbours, did not do so. A series of events in the 1970s, including success in the 1971 war against Pakistan and nuclear testing in 1974, increased India’s credibility as a regional power. However, its unofficial support to the Nepali Congress Party leadership and absorption of Sikkim in 1974 probably increased Nepal’s vulnerability. It also had to struggle to get the 1971 trade and transit treaty amended to incorporate its demands.

But it was in 1988 that India-Nepal relations took a nosedive. This was when Nepal signed an agreement with China to purchase weapons. China also won a contract to construct a road in the western sector to connect to Nepal. When the 1978 treaties on trade and transit rights expired in March 1989, India insisted on negotiating a single treaty on this issue. When Nepal refused, India closed all but two border entry points to it on March 23, 1989. This unofficial blockade exerted huge pressure on Nepal as it was dependent on imports from India, including fuel. This caused immense suffering to its people.

However, after a 13-month blockade, relations with India turned positive with the success of the Movement for the Restoration of Democracy in early 1990. The joint Kathmandu-New Delhi communiqué, signed in June 1990, restored all bilateral ties, including trade and transit routes for Nepal’s imports, while respecting each other’s security concerns. All the border points were reopened and Nepal restored India’s commercial privileges. Significantly, the communique declared that the two countries would cooperate in industrial development and harnessing the waters of their common rivers for mutual benefit. Nepal’s relation with India had to undergo testing times during the years of Maoist insurgency, with China increasingly playing a role in Nepal. Nepal had to undergo a painful process of constitution-making after the Maoists joined mainstream politics.

Soon after coming to power, Prime Minister Narendra Modi made a two-day visit to Kathmandu in August 2014, the first by an Indian PM in 17 years. Sushma Swaraj, the then foreign minister, co-chaired the meeting of the Indo-Nepal Joint Commission (JC), a preparatory to the PM’s visit. The JC met after a gap of 23 years, indicating India’s benign neglect of Nepal in its foreign policy priorities. The two countries agreed to review and adjust the 1950 Treaty of Peace and Friendship to reflect current realities. It was followed up with the formation of the Eminent Persons Group (EPG) in 2016, comprising of experts from India and Nepal to review all bilateral treaties and agreements, including the 1950 Treaty. The EPG finalised its report and presumably the Kalapani issue also figured in it. But it is not clear what follow-up action was initiated by both countries.

Nothing illustrates the continued fragility of relations like the blockade of roads leading to Nepal after it promulgated its new Constitution on February 20, 2015. Marginalised groups living in the Terai region bordering Bihar state—the Madheshis, Janjatis and Tharus—felt left out in the new Constitution. Madheshis protested by blocking fuel trucks at border points. The blockade, coming in the wake of a severe earthquake in Nepal, internationally did enough damage to India’s credibility. By the time it ended in October 2015, China became an indispensable partner as it supplied much-needed fuel. Coupled with the memories of the 1989 blockade, the Madheshi blockade left bitter feelings among Nepalis and influenced Nepal’s policy in the coming years.

In all these machinations, it is good to remember the people of both countries. Six million Nepalis work in India; around 32,000 Nepalis serve in the Indian armed forces and around 1.26 Indian army veterans live in Nepal; there are 11,000 widows of veterans and 12,000 Assam Rifles personnel. Indo-Nepal trade in 2018-19 was a whopping Rs 5,47,858 crore. With Nepal clocking nearly 7% growth, the prospects of further increase in trade are plenty.

We need to preserve the unique character of India-Nepal relations. A map represents peoples’ identity as a nation, so the Nepal map issue should neither be ignored nor trivialised as “yet another” anti-Indian act. That would be oversimplifying the complex problems of Nepal, a small neighbour sandwiched between two Asian giants, as it tries to survive the problems of realpolitik and preserve its own identity.

Added to this is the problem of Nepal’s nascent democracy trying to evolve a coherent development narrative in the midst of political gerrymandering.  Nepal does not need condescension but consideration from India. Rather than allowing the differences to grow, India should take the initiative to resolve the border issue with Nepal.