With liquor accounting for 24 percent of the state’s revenue, it was no surprise that the LDF government tried to allow those habituated to their drink to get their daily quota till the High Court put a stop to it. By Ashok Damodaran 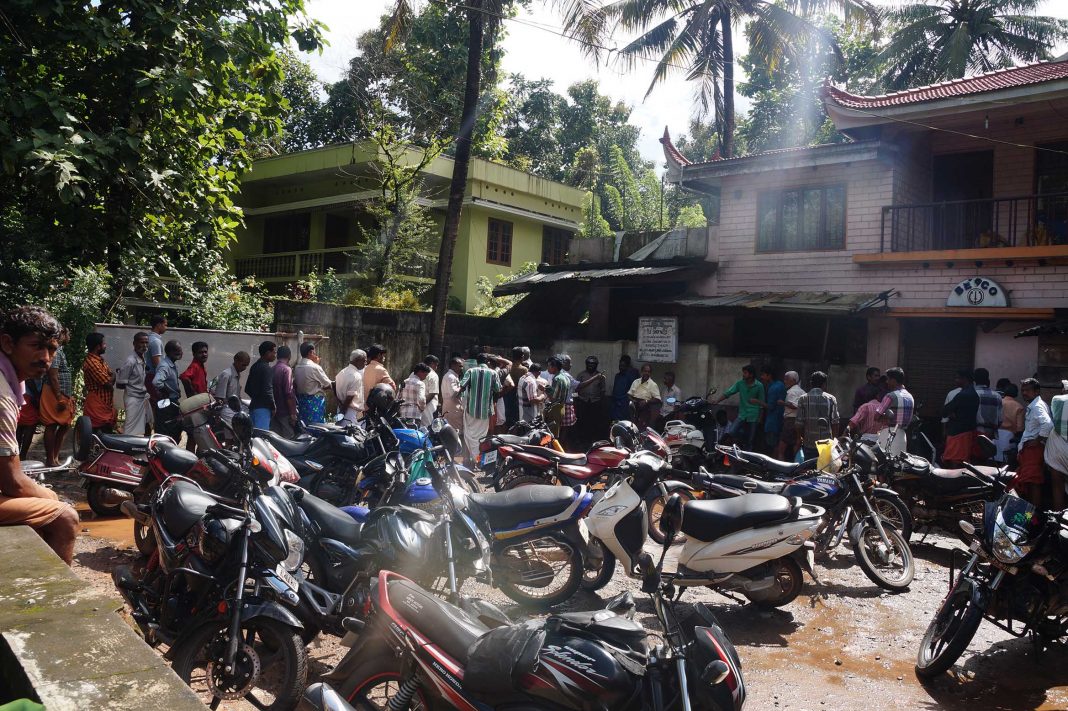 Adversity, it is said, brings out the best in everyone. Two years ago, when Kerala was ravaged by floods, Chief Minister Pinarayi Vijayan led from the front, displaying leadership qualities not often noticed among the political class these days. In the two months since Kerala became the first state to be hit by the coronavirus, Vijayan has once again displayed exemplary qualities by initiating and implementing measures that have made the state’s calamity and pandemic preparedness a benchmark for other states.

But adversity also brings out the worst in some. Even as praise continued to flow in for the chief minister, specially from doctors and health workers, his government was dealt a heavy blow on April 2 by the Kerala High Court. It stayed the LDF government’s decision to allow those habituated to alcohol to get around the lockdown and purchase liquor by getting themselves certified as alcohol-dependent by a government doctor. A bench comprising Justices AK Jayasankaran Nambiar and Shaji P Chaly said the government order was “disturbing” and a “recipe for disaster”.

The Vijayan government came up with the “recipe” after eight people with an alleged history of alcohol addiction committed suicide within five days of the lockdown. The government tried to paint a picture of its already stretched health services, which were busy fighting the coronavirus battle, having to deal with another major health scare triggered by withdrawal symptoms among alcoholics.

But Justices Nambiar and Chaly were not convinced nor was the Nati­onal Mental Health Wing, the de-addiction wing of the Indian Medical Ass­ociation (IMA) and the Kerala Government Medical Officers Asso­ciation (KGMOA), who petitioned the Court. The Kerala chapter of IMA had earlier written to Vijayan stating that “making a doctor recommend alcohol to a person is not ethical” and urged the government to “reconsider its decision in this regard”.

The IMA said in its letter: “Alcohol withdrawal can be managed successfully using medications and we feel that asking doctors to recommend alcohol itself as the treatment of alcohol withdrawal would be sending a wrong message to the public. We worry that this would motivate many people to approach doctors to get ‘prescriptions’ for alcohol, leading to fraud and malpractices.”

Doctors who spoke to India Legal expressed surprise that the government would go to such an extent to keep the liquor business running as usual. They said that no member of the medical fraternity would think of prescribing alcohol to cure any illness, much less de-add­iction. The secretary of KGMOA,

Dr Vijayakrishna, told the media:“There are scientific methods to treat people with withdrawal symptoms and that’s the medical protocol. This is something which will affect our morale and numerous side-effects will surface. We cannot do this.”

Dr P Ismail, former deputy director of Kerala Health Services, told India Legal: “The idea is hair-brained. There are many aspects apart from the moral ones. What if a handful of people surround a government doctor in a dispensary in some remote village and demand such certificates? What if a doctor refuses to give it and they beat him up? Will the government give security?”

There were other doctors who, while not in favour of drinking, advised agai­nst a complete ban on liquor. “A total ban may prompt people to turn to other options like illicit liquor or drugs, which are even bigger threats,” said one doctor.

But the real reason behind the LDF government’s move was that like others before it, it has treated the liquor business as a cash cow. Kerala’s sole liquor supplier is the Kerala State Beverages Corporation (BEVCO) which until the lockdown was selling nearly Rs 50-crore worth of liquor every day. In 2018-19, BEVCO earned Rs 14,508 crore from liquor sales. The excise duty on bottled liquor ranged from 300-500 percent, depending on the brand. For example, a bottle of rum that costs Rs 100 was sold for Rs 400-500 in the market.

The incumbent government is only following in the footsteps of its predecessors that have always waxed eloquent about prohibition but gone on to do exactly the opposite. An exception was the last Congress government led by Oommen Chandy, which in 2014, promised to bring about total prohibition in the state within 10 years. As a first step, it closed down all bars in hotels with a rating below five stars. The fall of the government in a state which has the unsavoury record of having the highest per capita consumption of liquor in the country—8.3 litres per year—came as no surprise.

In the elections that followed in 2016, the LDF came to power and began to chip away at the previous government’s prohibition policy. At first, it allowed bars in hotels with three and four star ratings to sell Indian-made foreign liquor, and lesser rated ones to run wine and beer parlours. The government these days readily hands out liquor vend licences to anyone with money. There is only one condition: vends must not be situated within 500 metres of the national highway, as stipulated by the Supreme Court.

The government has defended its liquor policy and said the crackdown by its predecessor had cost the state a huge number of jobs besides hitting Kerala’s highly lucrative tourism sector. Vijayan said his government believes in restr­aint, not prohibition. He claimed that the use of drugs had gone up alarmingly after prohibition came into force. “The liquor policy of the UDF which envisaged total prohibition was a complete fiasco,” he had said in 2017 after allowing hotels to sell liquor.

It’s obvious that the real reason behind going slow on prohibition as well as the government’s desperate efforts to keep the booze business open now was the money coming into its coffers. Two of the largest sources of tax revenues which are under the direct control of states are petroleum (petrol and diesel) and alcohol, both of which do not come within the ambit of GST. Liquor acc­ounts for about 20 percent of the share of government revenue in most states, while in Kerala, it is almost 24 percent, up from 15 percent a quarter of a century ago.

As soon as the 21-day lockdown was announced, the Kerala government classified alcohol as an essential commodity and sales continued. But the state had to step in after being prodded by the centre which felt that in the rush to get their day’s quota, tipplers were not following norms relating to social distancing. It downed shutters on March 26, only to resume it after a two-day break as alcohol was classified as an “essential commodity” for patients.

But with the High Court throwing a spanner in the works, it could be a long thirsty wait for alcoholics in Kerala.