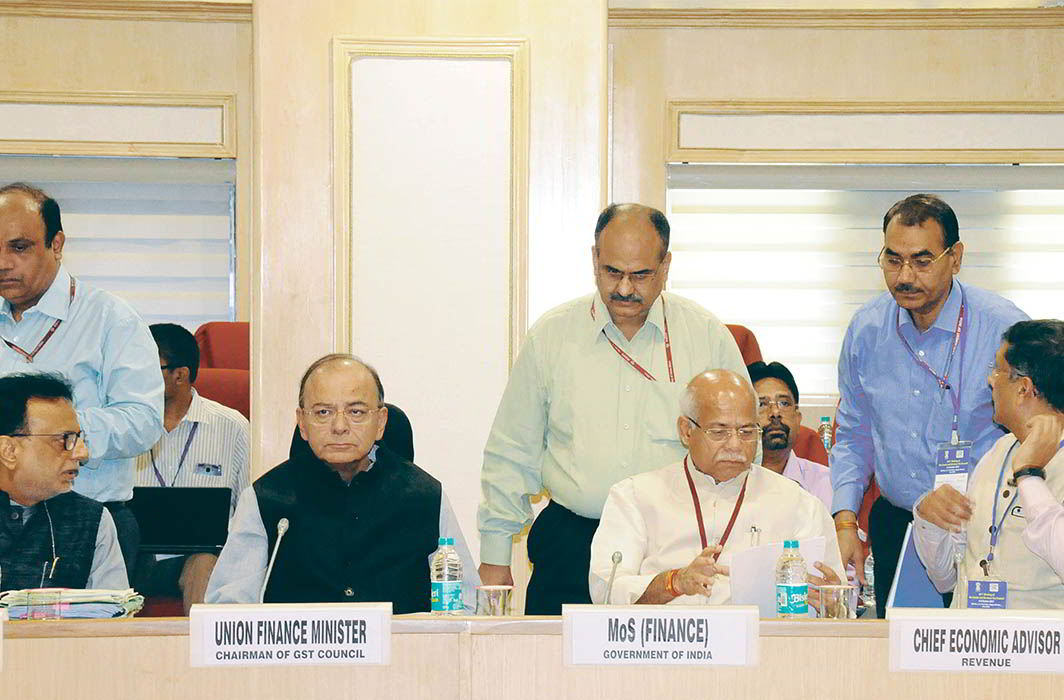 Above: The GST Council meeting in progress on October 6, to look into some grey areas. Photo: UNI

Prime Minister Narendra Modi is quite used to taking criticism in his stride. He either ignores it, or dismisses it as the rants of opponents who have nothing better to do than to throw darts at him. But when the venerable Reserve Bank of India supports a negative assessment of his government’s key economic initiatives, he has no option but to sit up and listen, as well as to act.

Well before the implementation of the Goods and Services Tax (GST)—described by the government’s spin doctors as the mother of all big bang tax reforms—doubters had sprung up from within the academic community, chartered accountants, and tax lawyers who advised caution and gradualism. Among them was India’s most notable tax and corporate attorney Arvind P Datar who predicted at Hyderabad’s NALSAR that the scheme was headed for serious trouble. In his talk on “Constitution, Federalism and GST” before students of the prestigious law university, Datar warned that a “terrible” thing was about to happen to the country. “It is not known whether the software has been tested. In order to avoid chaos, the GST regime should be implemented in phases. It should be first implemented for select industries and then expanded further.”

Senior advisors paid scant heed to these cautionary notes until, barely three months into the implementation of this scheme, the drizzle of criticism has turned into a torrential downpour. The barbs have been flying from all sides—traders, exporters, professional accountants, farmers, the media, and former finance ministers cutting across party lines, prominent among them BJP’s Yashwant Sinha and Congress’s P Chidambaram.

But the unkindest cut of all came from a totally unexpected quarter: the prestigious Monetary Policy Committee (MPC) of the Reserve Bank of India, in its fourth bi-monthly monetary policy statement, 2017-18. Headed by no less a luminary than Governor Urjit Patel, Modi’s personal choice for that post after the exit of Raghuram Rajan, the MPC did not mince its words in citing a prime cause for the alarming slowdown in India’s economy:

“Turning to growth projections, the loss of momentum in Q1 of 2017-18 and the first advance estimates of kharif foodgrains production are early setbacks that impart a downside to the outlook. The implementation of the GST so far also appears to have had an adverse impact, rendering prospects for the manufacturing sector uncertain in the short term. This may further delay the revival of investment activity…. Consumer confidence and overall business assessment of the manufacturing and services sectors surveyed by the Reserve Bank weakened in Q2 of 2017-18; on the positive side, firms expect a significant improvement in business sentiment in Q3. Taking into account the above factors, the projection of real GVA growth for 2017-18 has been revised down to 6.7 per cent from the August 2017 projection of 7.3 per cent, with risks evenly balanced.”

The message was loud and clear. And the prime minister went into damage control. He went into a huddle with Finance Minister Arun Jaitley and party supremo Amit Shah who had to cut short a campaign visit to Kerala. And Modi chose the Golden Jubilee of the Institute of Company Secretaries to assure the country that he had instructed the GST Council to review the problems being faced by traders and the business community after the launch of GST. He said: “Hum lakir ke fakir nahin hain” (We are not inflexible)” and promised that his government is willing to make necessary amendments upon recommendations by various political parties and state governments.

On October 6, two days after Modi’s statement, the GST Council began its emergency session at Delhi’s Vigyan Bhawan under the chairmanship of Jaitley to try and iron out some of the major glitches. In addition, a committee led by Revenue Secretary Hasmukh Adhia, the Gujarat cadre IAS officer who was Modi’s principal secretary when he was chief minister, will submit a preliminary report to the Council on steps needed to provide relief to exporters who have also been at the receiving end of the SST shockwaves.

Even as the Council meets, India Legal asked former CBEC Chairman Sumit Dutt Majumder, author of the book Know Your GST- GST Unraveled, to take a reality check and explain what changes the country can expect to see in both the implementation and rationalisation of GST so that it can become more business friendly and help the economy grow into a one-nation-one tax structure as was originally planned.

Here are some of the problems along with solutions:

Experts across the world have advised against taxing small businesses because it is not cost-effective, it is cumbersome and it breeds corruption. By keeping the threshold at Rs 20 lakh, the policymakers have already ensured that only a small number of very small businesses will remain outside the ambit of GST. But, even that exemption benefit has been further curtailed by the following two policy decisions.

First, there would be no threshold exemption for those who undertake inter-state supplies. Thus, even a taxpayer with an annual turnover below the threshold will have to pay GST if he trades across state lines. Such a taxpayer would have to discontinue inter-state supplies, thereby shrinking his business. Secondly, because of Reverse Charge Mechanism (RCM) applied to certain small businesses, the taxpaying recipients have been called upon to pay GST, take credit and file returns in respect of goods and services received from the unregistered suppliers who are below the threshold.

This is a burden on the taxpaying recipient since his working capital would remain blocked during the period of payment of tax and taking of credit, and the compliance costs of filing of returns on behalf of the supplier would add to his cost.

As a result, bigger businesses have stopped dealing with such unregistered tax payers. This is further wiping out small businesses which provide an estimated 60-65 percent of the country’s employment. The cascading effect will hit Big Business as well, since it depends heavily on the small business for supply of raw materials and components.

The GST Council which met on October 6 has given a major relief to small companies and traders. Some of them are:

These deficiencies could have been largely corrected through a few test runs. However, the government must have had its compelling reasons to disregard the call in certain quarters for deferring the implementation by two months.

The Group has started its work, and Sushil Modi summed up the situation by stating that correcting glitches in the GSTN was like repairing a ship while it was already sailing. It is hoped that the GSTN will be set right soon.

Another concern is on the matching of invoices which is designed to ensure that the input tax credit taken by the recipient matches those for which the supplier has paid the tax. This is likely to put tremendous pressure on the GSTN. This secondary process may also be deferred till the GSTN stabilises.

Initial glitches notwithstanding, GST has to be taken as a “work in progress”. But the government has recognised the urgency of removing roadblocks, particularly those relating to interstate supply and the reverse charge mechanism for small businesses.

The judgment was pronounced by a single-judge bench led by Justice Vibhu Bakhru on the appeal against the order of the trial court which had convicted the appellants for the offences punishable under Section 109 read with Section 376 of the Indian Penal Code.
Read more

The counsel for the petitioner states that the candidate satisfies all needed criteria under the advocate's act, 1961, and there is no specific rule in Bar Council of India to bound the enrollment of the petitioner.
Read more