A judge has suggested that Justices and Lokayuktas should be subjected to narco tests if allegations are levelled against them. Post-retirement benefits are common among judges and erode trust and respect 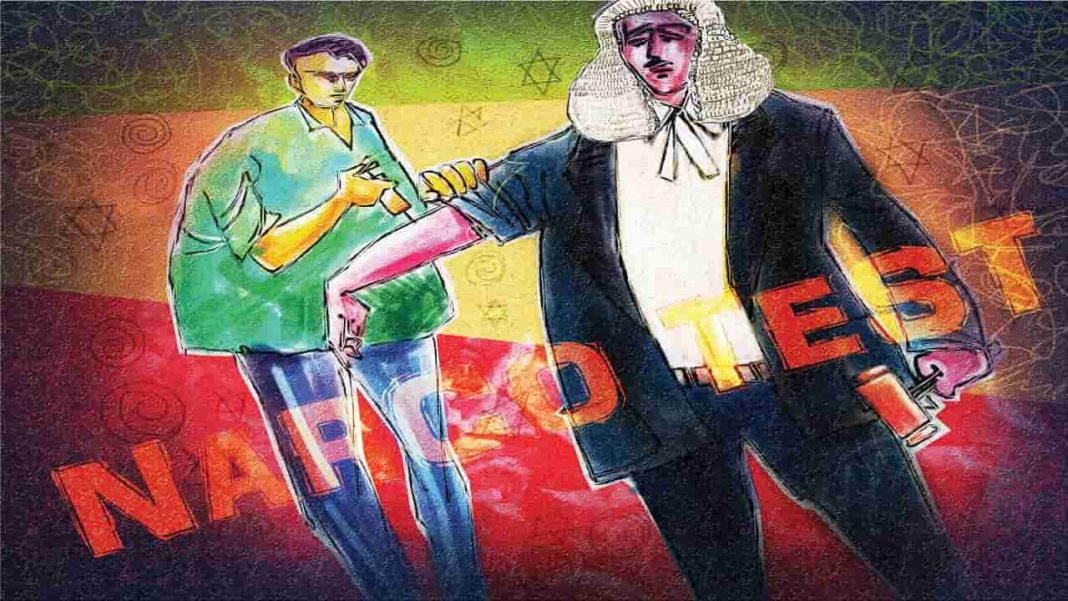 Margaret Cavendish, the famous English philosopher, rightly said: “A judge is easy to be had, but to get an impartial judge, is a thing so difficult.” Comments by recently retired judge Justice P Krishna Bhat of the Karnataka High Court caused a stir in the hallowed corridors of courts of justice. He suggested that judges, Lokayuktas and other higher officials should subject themselves to narcoanalysis if there were allegations levelled against them. Justice Bhat was speaking at a farewell function organised for him in the High Court.

The statement was given in the context of allegations that judges during their probation and promotions end up delivering judgments that they are told to. He also said: “Such situations have caused incalculable damage to the credibility of the functionary in particular and the institution at large.”

A study, “Jobs for Justice(s): Corruption in the Supreme Court of India” has thrown light on the relationship between post-retirement jobs and pre-retirement judgments, a concern that has been flagged by many, including lawmakers and even judges. It has further shown that authoring pro-government judgments increases the likelihood of post-retirement jobs for judges. The study constructed a data set of Supreme Court cases involving the government from 1999-2014. It was found that incentives have a causal effect on judicial decision-making and that they are jointly determined by the importance of the case and whether the judge retires with enough time left in a government’s term to be rewarded with a prestigious job.

Justice Bhat also said that judges who expect differential and deferential treatment “render themselves unfit to hold and public positions. Such vanities are destructive of judicial independence”. The statement came in the context of a High Court judge who wrote to the then chief justice to take action against a district judge because he did not receive him personally at the airport.

While offering narcoanalysis tests as a solution to the complaints being made against judges, it was also felt that the imposition of such tests would act as a deterrence to all judges who go against the rule of law for personal gratification. Being a judge is a sacrosanct task; hence any actual or perceived lack of judicial integrity would definitely pose a great threat to the rule of law.

Elaborating on what he meant, Justice Bhat said: “If the progeny of the judges of the most superior court in the country call on the judicial officers at their residence with eager litigants in tow with an attempt to pass slips and thereafter, drop the name of their forbear with hints of protection, then there is a serious problem to the independence of the judiciary.”

The dangers of such conduct cannot be stressed enough. Judges are considered independent people with great wisdom and courage and their appointment is to always be free from influence or pressure of executive or legislative bodies. The powers, rights and duties of judges not only apply inside courtrooms, but also outside. In various judgments, courts have opined that justice relies heavily on perception and as the maintenance of the discipline in the judicial services is of utmost importance, the acceptability of the judgment passed by a sitting judge is based upon the honesty, integrity, conduct and character of the officer. Any lack of integrity, whether actual or perceived, shown by a judge, will immediately affect the litigating public.

The apex court has also held that judicial officers cannot have two different standards, one in court and another outside. They should have only one standard, and that is of honesty, integrity and justice. Five things are requisite to a good officer—ability, clean hands, despatch, patience and impartiality. A lack of even one of these is sufficient to raise doubts on his suitability as a judge.

Another study by Vidhi Centre for Legal Policy in 2016 found that out of 100 retired Supreme Court judges, as many as 70 had taken government-appointed positions. Incidentally, the Union government is the single biggest employer of retired Supreme Court judges. It has also been noticed these days that such appointments are not transparent and follow no particular system. They are politically driven and hence pose a big threat as they give an opportunity to the government to dangle these cushy jobs as a carrot before the judges while hearing cases involving it.

Another point is that the Indian State is the biggest litigator before courts with at least 46% of pending litigation having the State as a party. As per the study, in 56% of these post-retirement appointments, it is a mandate that the position must be filled by a retired judge. A majority of post retirement jobs for Supreme Court judges are in tribunals like the National Consumer Dispute Redressal Commission, National Company Law Tribunal and others. These tribunals are quasi-judicial bodies that were constituted in order to reduce the burden of courts, but it has been observed recently that most of the seats in them are lying vacant, further reducing their effectiveness.

The acceptance of a nomination in the Rajya Sabha by retired Chief Justice Ranjan Gogoi was unprecedented and threw a big question mark on the system of post-retirement jobs for judges. Statistics shows that the odds that a Supreme Court judge gets a post-retirement job increased by 15-20% with every judgment that is favourable to the government. While there are judges who take up private jobs and use their experience and skill in various areas, there are others who get appointments from the Supreme Court itself like Justice RM Lodha who was handed the BCCI case.

Then, there are judges like Justice VR Krishna Iyer who became a Supreme Court judge after being a minister and judges who take statutory jobs in the National Green Tribunal, National Human Rights Commission and such bodies. Ultimately, it is the politician who decides the name of judges who will hold these positions in various Commissions and it is most often than not based on criteria other than merit.

Most people also say that 65 years (the age at which a judge retires) is too young to hang up one’s boots. A suggestion was made to increase the retirement age to 70 on the condition that any statutory position that has to be given shall be within the tenure of the judge. This was believed to make an impact that would counter post-retirement incentives. However, no steps have been taken in this direction.

The suggestion by Justice Bhat regarding narcoanalysis comes with its own problems as it cannot be conducted on any person without his consent, as per a judgment of the apex court. Such procedures “are illegal and a violation of personal liberty”, ruled a three-judge bench headed by then Chief Justice KG Balakrishnan. Prosecuting agencies and the police have been using such tests and various courts have been giving conflicting judgments on their validity.

Conducting these tests on judges would also have far reaching consequences as there are other legalities to be considered. The fact that “no person accused of any offence shall be compelled to be a witness against himself” as per Article 20(3) of the Constitution cannot be overlooked. Even though there is no scientific literature to prove that the truth serum works, human rights groups have held the tests to be mental torture and violative of the fundamental rights of a person.