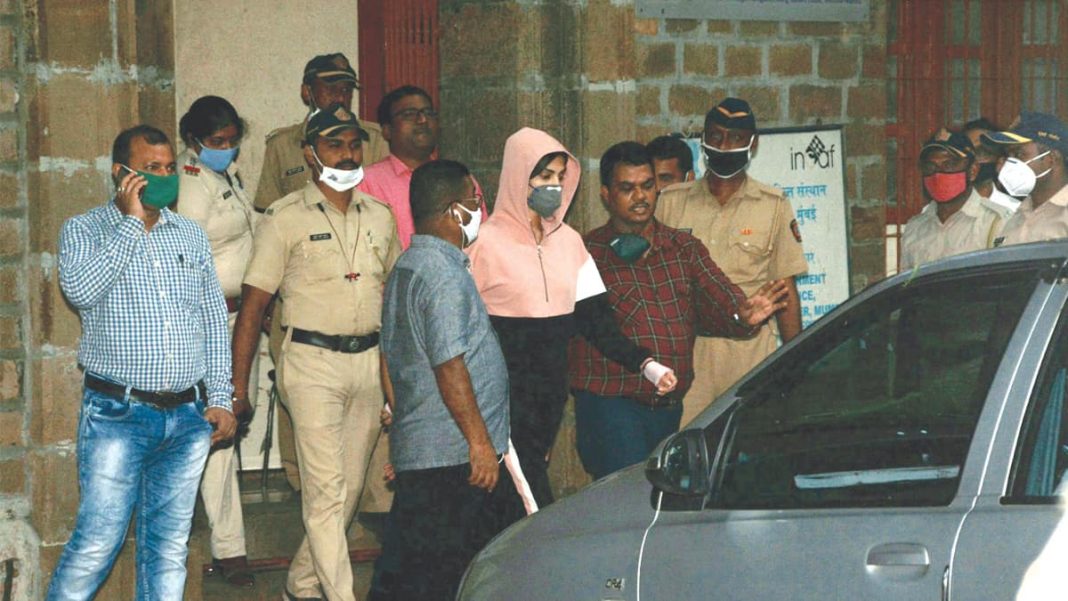 Ever since the arrest of Rhea Chakraborty by this narcotics agency, curiosity has mounted about its role, powers and use as another law enforcement weapon in the hands of the government. An inside look

Of late, the Narcotics Control Bureau (NCB) has earned its share of infamy, getting involved in two high-profile cases, the Sushant Singh Rajput death case and the sandalwood drug scandal. Sandalwood is the colloquial term used for the Kannada cinema, also known as Chandanavana.

However, when politics at the top gets involved in the personal lives of stars and starlets, each side using them as pivots and levers in achieving bigger ends, small fry of the special bran­ches of state police departments fall by the wayside. That is when “big guns” such as the NCB are taken out of the closet, dusted and put into action.

One has to be practical in assuming that both agencies—the special (or intelligence) branch of the police and the NCB—are manned by similar personnel. Those in the NCB are not the official version of the Avengers, and do not have supernatural powers. Both agencies draw their personnel from similar pools.

What differentiates the action of NCB sleuths from the rest are two things: their special training and the official mandate that allows them to get cooperation from several national and even international agencies.

The NCB was envisioned as a special project of the government. It was set up as the apex drug law enforcement agency with the view to coordinate the actions of various central/state agencies in matters related with drug law in the country. The assignments of the NCB are complex. India is a signatory to various international drug-related UN conventions and the responsibility of implementation of their provisions lies with the NCB.

The responsibility of drug-abuse control, which is a central function, is carried out through a number of ministries, departments and organisations. These include the Ministry of Finance and the Department of Revenue which has the nodal coordination role as administrator of the Narcotic Drugs and Psychotropic Substances Act (NDPS), 1985, and the Prevention of Illicit Traffic in Narcotic Drugs and Psychotropic Substances Act, 1988.

The government constituted the NCB on March 17, 1986. It is subject to the supervision and control of the central government. It exercises the powers and functions of the government for taking measures with respect to:

The NCB has always worked with other agencies and that is the nature of its work. It does not override other agencies’ authorities or jurisdictions.

How important is the role of the NCB within the boundaries of the country? A 2009 publication of the United Nations Office on Drugs and Crime, titled Curriculum on Drug Law Enforcement, talks about a very special regional initiative, called “Strengthening Drug Law enforcement capabilities in South Asia” which was established in July 2008. This was in “response to the drug trafficking problem in South Asia, requiring international cooperation”. The success of any enforcement strategy depends upon drug enforcement professionals whose skills need to be constantly upgraded. There is, therefore, “a need for countries in the region to strengthen training capacities and formulate training strategies,” says the report.

It was a huge partnership effort. The project on “Strengthening Drug Law enforcement capabilities in South Asia” is being implemented in partnership with the National Academy of Customs, Excise and Narcotics (NACEN), now known as the National Academy of Customs, Indirect Taxes and Narcotics (NACIN), which is an ideal Resource Centre for training law enforcement officers of countries in the region.

The project’s objective is the creation of an institutional and quality training and consultation capacity in the region on drug law enforcement and to improve the knowledge, awareness, cooperation and results in the field of drug control and organised crime. This will contribute to limiting the spread of drug trafficking, abuse and organised crime in the region. Bangladesh, Bhutan, India, Maldives, Nepal and Sri Lanka are the participating countries.

This huge training programme of the UN showed that while India had been placed as a nodal country for carrying out several such important activities vis-a-vis this project, the NCB had assumed a sterling position in this massive effort.

What does the NACIN do? The interesting fact is that it is part of the revenue services and falls under the Ministry of Finance. This Faridabad-based academy trains and sensitises civil servants in the field of indirect taxation, particularly the areas of customs, GST, central excise, service tax and narcotics control administration.

Then there is the Central Bureau of Narcotics, also affiliated with the Department of Revenue. Its main function is to stop opium production and trade, and to issue licences for the production of legal synthetic drugs.

This is the complex nature in which India controls the flow of drugs throughout the country and across its borders. Since India’s training facility is advanced and experienced, it is also a huge resource centre for agencies in other countries.

Within this, the NCB is the operational wing. The NCB’s mandate is policing, but it also has to find the money trails, a tried and tested way of tracking drug dealers. For this, it falls back on several months of rigorous training and the database of many organisations and agencies.

Earlier this month, the International Narcotics Control Board held its 128th session, and elected new members. The meeting was supposed to be held in Vienna, but was held in a hybrid format due to Covid.

The highlight of the meeting for India was the election of Jagjit Pavadia as Second Vice-President and Chair of the Standing Committee on Estimates, and Member, Committee on Finance and Administration of the organisation. The key discussion at the meeting was:

These are the areas where India’s narcotics control efforts spread. And amid all this, the NCB has a critical role. That power in the hands of NCB sleuths separates them from hoi polloi special branch inspectors of the state police. Technically, using the NCB to track personal drug consumption patterns of stars and starlets in Bollywood would be akin to using your Bentley to deliver your dirty laundry to the dhobi ghat. You can afford to do it, but would you?