The Sunset Years: Senior citizens bear brunt of abuse, mistreatment from their own

It is a tragic fact that the elderly in Indian families is facing an existential crisis. Increasingly, senior citizens are being physically and mentally dehumanised by their own, in their own homes. The truth is borne by surveys. APN channel did an in-depth discussion on the plight of senior citizens on its special show India Legal. The show was moderated by the channel’s Editor-in-Chief Rajshri Rai. 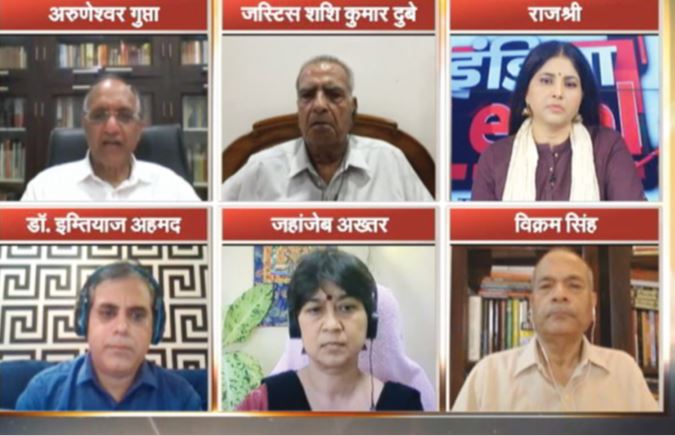 An increasing number of elderly people are facing humiliation of the worst kind: mistreatment and abuse at the hands of their own. The story of physical, psychological and emotional abuse stays within the four walls of the house and in the scarred hearts of these senior citizens. The most common types of abuse are disrespect, verbal and physical abuse, isolation, neglect, lack of medical treatment and siphoning off of their funds.

A six-city survey by HelpAge India, an NGO that works for the rights of the elderly, found that 62% of the respondents had experienced increasing ill-treatment. A study by Agewell India found that 58% of elderly respondents were abused by their families.

“The elderly population has increased rapidly. HelpAge India does an annual survey every year on June 15, which is World Elderly Abuse Awareness Day. In our survey, we have found that 66% of the elderly face disrespect, 49% are victims of verbal abuse, 33% suffer neglect and 82% don’t report maltreatment. The aged prefer to stay silent and bear the ignominy than speak out and face the stigma of being victimised. The Covid-19 situation has worsened their plight. People are working and spending long hours at home, leading to greater chance of conflict in face-to-face interaction with elders of the family and consequent victimisation. The home-bound restrictions also beget depression.”

Clearly, during the Covid-induced lockdown, fear, worry and loneliness among the elderly have increased. There is increased risk of abuse due to growing dependency. While battling health issues, they are also dealing with the loss of loved ones, and facing abuse from their own. “Of those surveyed, 62.1% said that during Covid-19, the risk of getting abused had increased. Our helpline received almost 20,000 calls during the second wave, a 36% increase since the first wave,” he said.

Vikram Singh, former DGP of Uttar Pradesh, has dealt with such cases during his tenure. He said: “The abuse of the elderly is a domestic problem. It occurs within the confines of the home and is difficult to cognise unless reported. Provisions have been made in the Constitution to preserve the rights of those over 60. As these articles are enshrined as Directive Principles, they cannot be enforced by a court of law. However, they are the basis upon which any legislation is drafted. Article 41 of the Constitution secures the right of senior citizens to employment, education and public assistance. It also ensures that the State must uphold these rights in cases of disability, old age or sickness.

“Meanwhile, Article 46 asserts that the educational and economic rights of the elderly must be protected by the State. So, a constitutional basis for legal enactments exists. Laws are also in existence which protect the rights of the elderly. Maintenance and Welfare of Parents and Senior Citizens Act is one such law. However, there is lack of awareness of legal provisions. That is one of the reasons for strict penal action against the wrongdoers. Due to lack of awareness, reports are not filed with the police.”

Also Read: Supreme Court asks UP government to pay Rs 7 lakh to man whose son was killed in an encounter

Justice Shashi Kumar Dubey, former judge of the Madhya Pradesh High Court concurred: “I endorse the Calcutta High Court order. It is the moral and legal duty of children to respect the elders. If they cross the line and become abusive towards the old, then they are liable for penal action.”

It is a sad fact that the main abusers were the son (43.8%) and daughter-in-law (27.8%). Surprisingly, 14.2% said that their abuser was their daughter. Physical abuse was reported by 58.6% of the respondents. Emotional abuse notched few percentage points more.

“Article 41 aims to secure work, education and public assistance rights for persons in cases of unemployment, old age, sickness, disablement, and undeserved want. On the basis of that, the Parents and Senior Citizens Act 2007 was formulated. This is now being reformulated. Quite a few changes are in the draft bill. For one, the definition of parents, relatives and children has changed. In the category of children, step-children, adoptive children, children-in-law and the legal guardian of minor children have been added. In expanding the scope of parents, the proposed amendment includes parents-in-law and grandparents. The elderly face food, shelter and medical aid issues, besides harassment. It’s a social reform issue. Abuse happens, but the elderly don’t report it. There is a limitation of laws. The victimised have to come forward to seek legal remedy. Thereafter, the judiciary and the police can initiate action. Social awareness needs to be spread about the rights of senior citizens.”

In 1999, the government constituted the National Policy for Older Persons to promote the health and welfare of senior citizens. A major strategy of this policy was to encourage families to take care of their older family members.

Jahanzeb Akhtar, a public policy expert, said: “The elderly is a vulnerable group and should be handled with care and concern. We should consider them as rich in experience and a repository of life’s lessons. Then the younger generation will take care of them. Whenever public policy is formulated, the social aspect is also taken into consideration. This is all the more important in old age policies. The government is considering a policy Employment Exchange for Senior Citizens and Senior Able Citizens for Re-employment in Dignity. The government perceives them as contributing members of society. This is a great concept.’’

Crime against senior citizens demands specialised policing—a policing that is not too abrasive or intrusive. The police should have better interpersonal reach with the elderly. Yet, this is lacking. Figures of the last few years reflects this—62,000 crimes against senior citizens are pending, which means a case pendency rate of 87%. The conviction rate is around 33.9%.

Vikram Singh said: “It would be wrong to say that police is not active in matters concerning senior citizens. If you look at the overall pendency of the police force, this aspect gets perspective. More research and development in crime against the elderly is needed. The modus operandi should be researched and quantified. Persons accused of crime against senior citizens should be put in fast-track courts. Special security cells should be made and the police should set up a security net.’’

Aruneshwar Gupta seconds Vikram Singh: “I would say that the police supports the elderly but the cases are complicated. It includes the human angle. The human relationship implicit in the case makes it a sensitive matter as the near and dear ones are implicated. Hence, the cases should be approached with sensitivity.’’

Also, senior citizens’ eligibility for free legal aid depends on the rules framed by the respective state governments. It varies from state to state. The State Legal Authority ensures that they are shielded from procedural hassles.

Justice Dubey said: “If a senior citizen is abused and subject to maltreatment, then quick and decisive action should be taken against the culprit. The cases should proceed with least adjournment and should be decided according to a fixed time frame. The victim should get maintenance for the period of the legal battle.’’

It is mentioned in the policy for healthy ageing that the maintenance and protection of parents is the responsibility of family members. In Adoption and Maintenance Act 1956, every Hindu son/daughter is under a legal responsibility to sustain his/her parents who are aged. In Section 125 of the Criminal Procedure Code, penal action has been included. Maintenance and Welfare of Parents and Senior Citizens (Amendment) Bill also makes it mandatory for children to take care of their elderly parents.

Jahanzeb said: “The help can start with legal aid. The government should decide when and how to give free or specialised legal aid. A case by case decision can be made. These cases can be studied from the basis of modification in existing laws. As the case involves conflict with kith and kin with whom the elderly is living under one roof, after the case has been initiated, the elderly should be provided with a provision to move to a separate and temporary abode, maybe with some financial support. This will prevent them from being subjected to further harassment and embarrassment from their tormentors.’’

The National Policy of Older Persons aims at multi-sectoral organic approach in which the government and NGOs work together. NGOs play a key role in supplementing public organisations.

Imtiaz said: “During Covid, work from home had become a norm, resulting in inter-family and inter-generational conflicts. HelpAge has been helping the elderly through a helpline. It has been so effective that the ministry of social justice has taken over the helpline and started the project in every state. The helpline also has a legal counsellor and guides the elderly. Virtual meetings are also set up.’’

Though a robust legal and social infrastructure is a necessity to ensure the well-being of the elderly, it is not fool-proof. The human element can play havoc with old age social security. Clearly, a new commandment is needed: Honour Thy Elderly. A change in mindset of the younger generation is needed. This alone can provide mental solace, a sense of belonging and a life of dignity to the elderly in their sunset years.