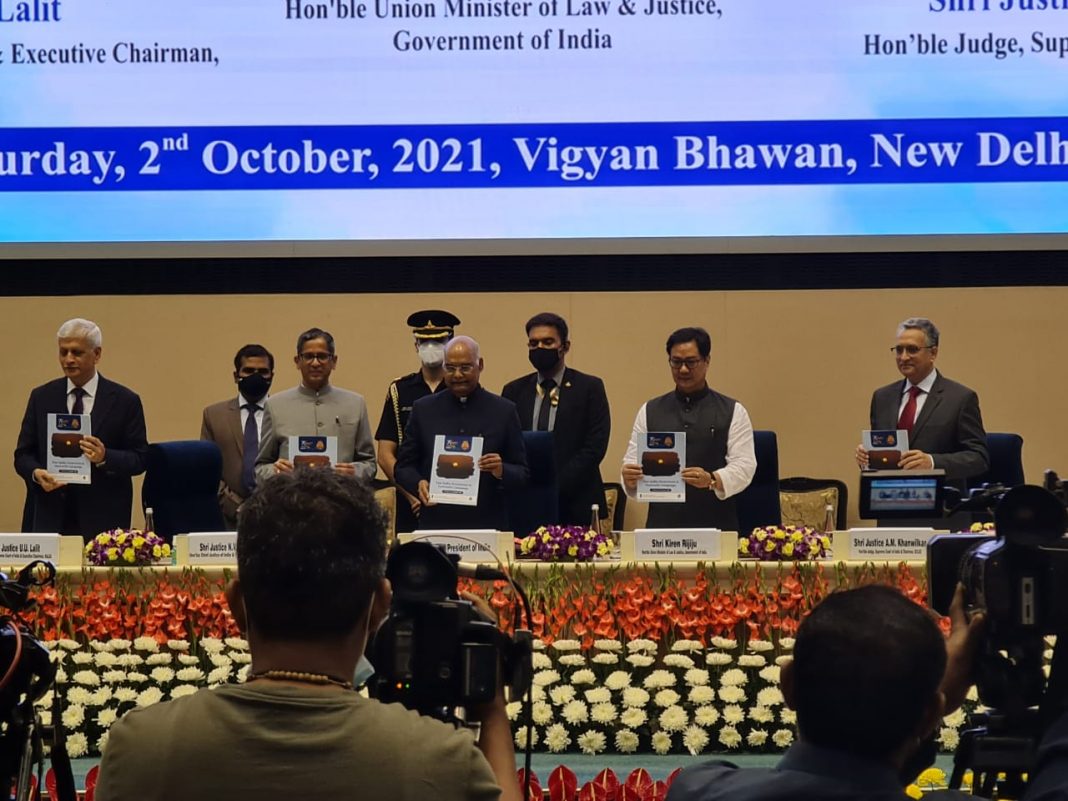 President Ram Nath Kovind on Saturday launched a six-week campaign called the Pan India Awareness and Outreach Campaign from October 2 to November 14, organised by the National Legal Services Authority (NALSA), to spread awareness among the people living in far-flung areas of the country, about the functioning of legal services and institutions, as well as to provide them Pro-Bono services.

The President inaugurated the event at 1100 hrs from Vigyan Bhavan today, on 152nd birth anniversary of Father of the Nation, Mahatma Gandhi. The event was graced by Chief Justice of India and Patron-in-Chief of NALSA, Justice N.V. Ramana; Union Minister of Law and Justice Kiren Rijiju; Executive Chairman of NALSA Justice U.U. Lalit, Judges of Supreme Court and the High Courts and other esteemed dignitaries.

Speaking on the occasion, the President said, “As a country, we need to graduate from women empowerment to women-led empowerment. The best legal talent must be available to the poor at reasonable costs, while Pro-Bono services should be made accessible to the weaker sections.”

Also Read: Supreme Court asks UP government to pay Rs 7 lakh to man whose son was killed in an encounter

He said, “Since Independence, we have come far but we still need work to establish the vision of our elders. I am glad that NALSA is working towards this, for providing legal aid. In his first major case in South Africa, Gandhiji suggested the parties to solve the dispute outside the court and arranged arbitration. He arranged for easy payment method and said the out of court settlement is a fast and less expensive process. He did a lot of pro bono work to help the poor. After returning to India in 1915 and watching rich lawyers charging hefty fees for legal service from the poor, Gandhiji said, “The best legal talent must be available to the poorest at reasonable rates”.

“Students from law colleges must attend NALSA and it should be a part of curriculum in their courses. I am sure that India, led by such bright minds, will showcase a society, where prosperity will be complimented by Justice, Fraternity and Secularity. I believe that the lack of awareness hampers the implementation of welfare policy introduced by the state. I believe there will be vernacular languages, NALSA is going to offer services in, to increase its outreach.

“Disputes resolved through amicable resolve and ADR mechanism such as mediation conciliation and Lok Adalat, remind us of our ancient values. ADR and legal service authorities have helped in solving millions of cases in year, while Lok Adalats have reduced the burden on courts.

The campaign aims to empower the masses through legal aid services, particularly for the people living in rural, tribal and remote areas, about entitlements guaranteed under the Constitution, as well as other welfare legislations.

During the campaign, the Legal Services Authorities across the country will reach each and every village of the country through its workforce and ensure that every nook and corner of the country feels the presence of Legal Services and Institutions. During the campaign, legal aid volunteers will reach all 6.7 lakh villages and over 4,100 municipal towns of the country. NALSA has also directed all States/Districts/Talukas legal service bodies (nearly 3000) to organise Prabhat Pheri in the morning of the birth anniversary of Father of the Nation, Mahatma Gandhi.

Law Minister Kiren Rijiju quoted Mahatma Gandhi, “Throughout my career as a bar lawyer, I never departed from honesty.”

Also Read: The Sunset Years: Senior citizens bear brunt of abuse, mistreatment from their own

He said for many people, any contact with the justice system can be a challenge due to its complexity. It is difficult to access due to no command on local language, accessing the formality. NALSA has developed a roboust system right at the grassroot level that each Indian will be proud of, by creating legal awareness amongst the masses. The campaign will help in curbing legal illiteracy, he added.

Mr Rijiju said, “One particular work of NALSA is the organisation of E lok Adalat, which has gathered my attention. I have something to talk about commercial courts. The success of any law to a great extent depends upon its cooperation of litigation and judiciary. The commercial courts carve out the litigation out of civil court and allow judges to reap it’s benefit. Judges who are experts in commercial field are required. It is to mandate the court that the adjournment happens at bare minimum. It takes 1444 days to solve a commercial court at first instance. It is a collective responsibility of all the state and stake holders to work amicably, there needs to be great Collaboration between Legal service authorities and state stake holders.

The CJI said, “In a complex society like us, the social cost of legal aid is unimaginable. Key to legal access to justice lies in legal awareness. I seek cooperation and support from the government to provide access to justice to strengthen the democracy. If the needy can’t reach us, we shall reach the needy.”

Did you find apk for android? You can find new Free Android Games and apps.
Share
Facebook
Twitter
Pinterest
WhatsApp
Previous articleThe Sunset Years: Senior citizens bear brunt of abuse, mistreatment from their own
Next articleLegal awareness is the key to equal access to justice: CJI Ramana