The Gyanvapi Masjid case has opened up a Pandora’s box of litigation aimed at the appropriation of Hindu religious places on arguments of faith and historicity. Can the Places of Worship (Special Provisions) Act, 1991, measure up to the emerging legal challenge? The India Legal show on APN channel, hosted by the channel’s Editor-in-Chief Rajshri Rai, tries to assess the current imbroglio 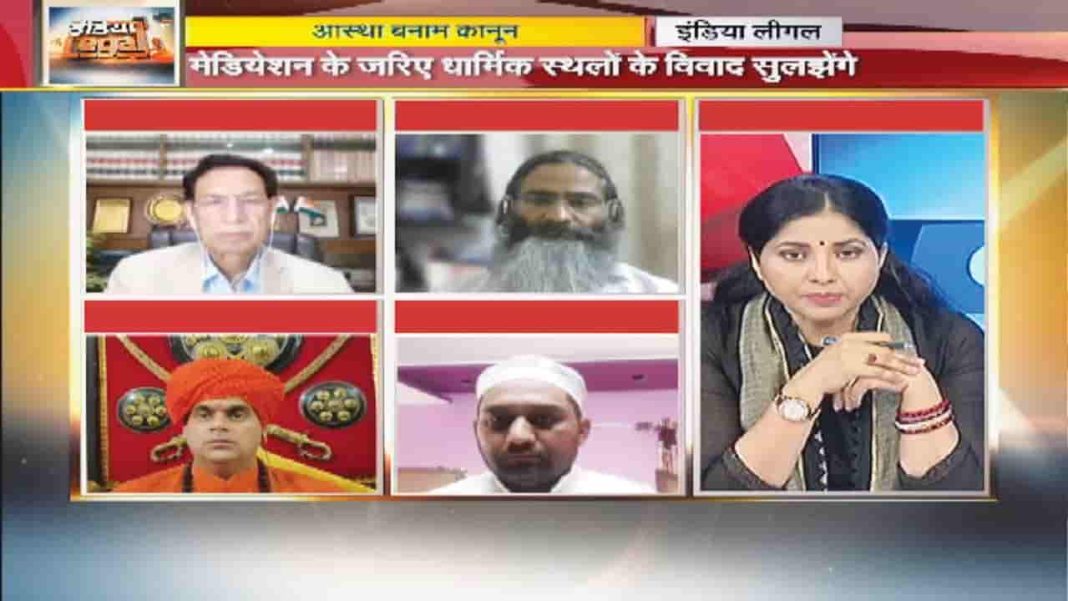 The embers of controversy which started from Kashi’s Gyanvapi Masjid has spread to many religious places across the country. Mosques are being viewed with suspicion and Hindu adjuncts and remnants are claimed as fragments of sacred Hindu temples of bygone eras. The demand for appropriation of places of worship is gaining traction. Apart from the Gyanvapi Masjid, Mathura Krishna Janmabhoomi and Vrindavan have also become centres of controversy. The Kashi Vishwanath Temple in Varanasi is considered to be the most important temple of Lord Shiva, and is also considered to be the most prominent of the 12 “jyotirlingas” mentioned in the Puranas. Yet Gyanvapi Masjid is also the place where the Muslims have been offering namaz since centuries. Hence, the legal battle being fought for the Gyanvapi Masjid involves religious sentiments of both the communities attached to it.

Central to this legal fight is the Places of Worship (Special Provisions) Act, 1991. Briefly, the Act freezes the status quo of a religious place as on August 15, 1947. In 2019, in its judgment in the Ayodhya case, the Supreme Court had touched upon the constitutionality of the Act and had strongly noted: “The Places of Worship Act imposes a non-derogable obligation towards enforcing our commitment to secularism under the Indian Constitution. The Places of Worship Act is thus a legislative intervention which preserves non-retrogression as an essential feature of our secular values. The issue of identity of religious places is not only related to faith and identity; the concerns of law, constitutionality and communal harmony are also involved.”

Justice Bhanwar Singh, former judge of the Allahabad High Court, said: “It is no doubt a complicated matter. Anyone who tries to change the status quo of religious places is bound to find resistance from the Places of Worship (Special Provisions) Act, 1991. No wonder, a bunch of petitions have been filed challenging the constitutional validity of the Act. The petitions hold that the Act violates the principles of secularism and the rule of law which is an integral part of the Preamble and basic structure of the Constitution. The petitioners also claim that the Act takes away the right of judicial remedy of the Hindus, the Jains, the Buddhists and the Sikhs to take back their places of worship and pilgrimage and property which belong to the deity. In my view, the Supreme Court or the High Courts should first decide the constitutionality of the Act then other matters will fall in place.”

As regards the Kashi Vishwanath- Gyanvapi Masjid dispute, the Varanasi district court had ordered survey of the site, which is complete now. The Supreme Court has held that the Places of Worship (Special Provisions) Act, 1991, does not prevent in ascertaining the religious identity of the place. The Hindu petitioners have made three demands: Right to worship the Jyotirlinga; possession of the Gyanvapi Masjid premise to the Hindus and the prevention of the entry of the Muslims into the premise.

Swami Chakrapani, president of Akhil Bharat Hindu Mahasabha, said: “If we go back in history, we find that during the foreign attack onslaught, the Vishwanath Temple was destroyed and rebuilt many times. When the Vishwanath Temple got rebuilt as per the wishes of Raja Todar Mal, it was again destroyed by Aurangzeb within just nine decades. The clash of culture was evident even then. In 1809, a Hindu-Muslim riot tore Banaras apart. The Vishwanath Temple and the Aurangzeb mosque were especially targeted by the rioters. Following communal riots in 1809, a magistrate named Watson suggested exclusion of Muslims from the mosque in a letter to the vice president in council. His suggestion was turned down. That is history. However, my team has given a memorandum to the prime minister and would like to meet him and appraise him of our possession. We will campaign for the abrogation of the Act. We want entry of Muslims to be banned at the site.”

The Act explicitly puts a bar on the any fresh legal proceedings which seek to change the religious character of a place of worship as it stood on August 15, 1947, as well as states that pending proceedings would also stand abated. In the Ayodhya verdict, the Supreme Court had observed that historical wrongs committed by rulers of bygone ages cannot be corrected under the present legal regime. Law is not the answer for the actions of ancient rulers, said the Constitution bench. The Court noted that the Places of Worship (Special Provisions) Act, 1991 is a mandate that “history and its wrongs shall not be used as instruments to oppress the present and the future.”

Akshay Sharma, an advocate at the Supreme Court, said: “It is a fact that different religions received state patronage under different kings at various points of time in history. The patronized religion was promoted and other religions were more or less ignored. In extreme cases, the places of worship of non-patronized religion were destroyed. Largely, Hindu temples faced the brunt of religious bigotry of Muslim rulers. This is the way things were in the past. When we became free, we chose to bury the past and began afresh with a secular Constitution. Later on in 1991, the Places of Worship (Special Provisions) Act was promulgated. It froze the religious character of places of worship as on 1947. It is a compact and precise Act and defines its intention succinctly.”

Maulana Mahmood Asad Madani, the president of Jamiat Ulama-i-Hind, has asked Muslim organisations not to intervene in the Gyanvapi Masjid controversy, which is currently being debated at both the public and judicial levels. He said that all kinds of public demonstrations should be avoided. The Muslim side has maintained that the matter doesn’t meet the parameters of the Places of Worship (Special Provisions) Act, 1991, and hence, they wanted the matter dismissed.

Mehruddin Rangrez, an Islamic Scholar, said: “The Places of Worship (Special Provisions) Act, 1991, was made to prevent any conflict over religious places. Before India became independent, during the rule of kings, destruction of places of worship was a norm. Not only temples were destroyed by rulers, Buddhist, Jain worship places and mosques were also targeted. Now we shouldn’t hark back at those incidents and create animosity amongst our selves. We should respect the law. The Places of Worship (Special Provisions) Act, 1991, is an apt law which should be adhered to. That’s the only way to handle demands related to religious places and maintain communal brotherhood.”

The Gyanvapi Masjid case is being heard in the lower judiciary. A judiciary so much pervious to diverse pressures. The pressure the lower court officials face has been aptly brought out by the comments of the Civil Judge (Senior Division) Ravi Kumar Diwakar, who had ordered the survey. He had said that an atmosphere of fear is being created by making this simple civil case extraordinary. The fear is so much that there is a concern about the safety of himself and the family.

Justice Singh added: “Attack and threat to judges is a serious matter. These attacks happen mostly due to the perception that the judge is partial towards one party. Over the years, many such incidents have happened. The judge should at all cost be given security. Whether it is at the High Court level or at the district court level, the administration should provide security.”

Mediation as a means to resolve conflicts is an effective judicial alternative. The Supreme Court had appointed a mediation panel to resolve the Ram Janmabhoomi-Babri Masjid land dispute in Ayo­dhya. Can such a model be adopted in the Gyanvapi Masjid case or other cases related to religious place of worship?

Justice Singh proposed: “To amicably settle the religious matters, it may be incumbent that a committee be formed with representatives from both the sides which shall look into all the aspects of the issue and suggest solutions or bring about an agreement. Even in the Ayodhya case, the initiative to mediate the case was undertaken. The judges were quite keen on it; it is a different matter that efforts didn’t fructify. In such cases where mediation efforts fail, it is incumbent on the parties to trust the judiciary and its wisdom. Let the judges decide the religious character of the place, or the constitutionality of the Act, as the case might be, and then accept the decision wholeheartedly.”

Chakrapani endorsed the mediation initiative. He said: “I fully agree with Justice Bhanwar Singh that we should repose our trust in the judiciary and accept its judgment. I also condemn irresponsible and incendiary comments which are raised against members of the either community. We should certainly speak up about our rights, but in no way that hurts the sentiments of others in the process.’’

When disputes are adjudicated by courts, one party loses while the other one wins. However, in mediation, there is a compromise or mutual agreement, and both parties emerge satisfied. Much time is saved in prolonged legal battles which embitter parties. If the matter is religious, it entails polarization and social discord.

Sharma added: “Though the Places of Worship (Special Provisions) Act, 1991, is clearly delineated, it has exceptions too. It holds that matters which have been settled, or in which the judgment has been given, should not be raked. It holds that worship can’t be allowed at the archaeological sites even if religious remnants are discovered there. However, our legal system has a brilliant feature—mediation and conciliation. We can try mediation methods to resolve such thorny issues. Maybe a judicial commission can be set up by the Supreme Court which can have judges, an ASI representative and both party representatives as members who can jointly seek common grounds of settlement.”

As per the Ayodhya verdict, the Pla­ces of Worship (Special Provisions) Act, 1991, is legally sanctified as a sentinel of secular values. Hence in the current sta­tutory framework, it is by accommodation and adjustment that solutions to the imbrog­lio can be reached. Petitions to app­ropriate religious places on arguments of faith and historicity will only complicate matters. The fight for ownership of religious heritage is at once a test of prevailing statutes and legislative positions.