The coronavirus pandemic has changed the way we engage and it will be worth watching how, post-lockdown, courts adapt to the lessons learnt from the past three months By India Legal Bureau 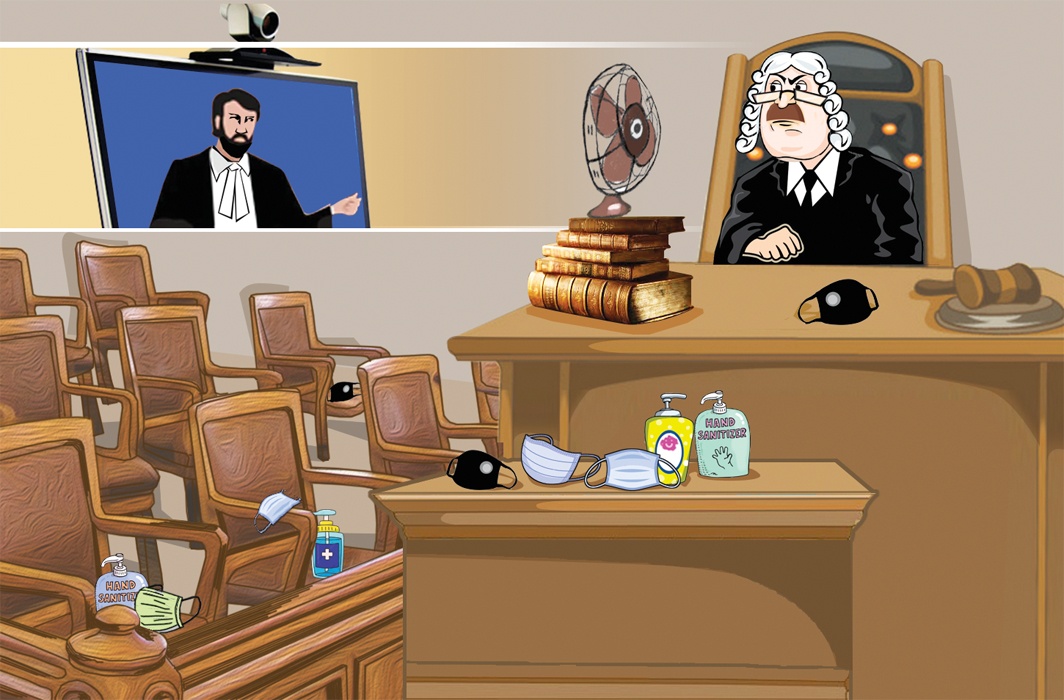 From the blue skies above to the crystal-clear waters of the Ganges to wandering herds of nilgai in Noida City Cen­tre, there is change everywhere. Even the courts, ever steeped in tradition, are witnessing chan­­ges that have seen them falling back on the past even as they embrace the new.

Delhi High Court perhaps typifies this best. In the backdrop of reports that central air-conditioning (AC) may spread Covid-19 infectious droplets, it fell back on old-fashioned pedestal fans. It also prepared detailed directives for all stakeholders—judges, lawyers, court staff and clients—on life in the hallowed rooms once normal routine is restored post-lockdown.

In mid-April, the Court constituted a committee led by Justices Hima Kohli, Vipin Sanghi, Rajiv Shakdher and Tal­want Singh for preparation of a “Graded Action Plan” for functioning after the lockdown to contain the spread of the coronavirus. The decision to take the traditional route to keep cool came in the wake of reports that ACs may circulate infectious droplets bearing the coronavirus.

In the third week of April, the Court sought a response from the centre and the AAP government in Delhi on a petition by a lawyer that no centrally air-conditioned buildings, including courts, be used without taking precautions to prevent the spread of Covid-19. The notice was issued by a bench of Chief Justice DN Patel and Justice C Hari Shankar and was also served on the Registrar of the High Court, seeking their stand.

On April 28, a meeting was held by this Committee to consider whether the AC plant could be run in the High Court after lifting of the lockdown and if so, what steps were required so that circulated air did not facilitate the spread of the coronavirus.

The Committee considered a report submitted by Sanjeev Rastogi, chief en­gineer, PWD, and Vikas Tiwari, junior engineer, PWD. According to the report, even if the Court incurs massive expenditure on procuring and installing ultraviolet germicidal irradiation devices, there would be no certainty of eradication of all virus, germs and particles, including Covid-19. They said that such a device can only disinfect the air rec­eived for recirculation and if any Covid-19 infected person enters an area with a central AC, there was the likelihood that the particles of the virus exhaled by such a person may remain airborne and in­fect others. They said that even in the SC, the central AC system had not been switched on till now and suggested that instead of inves­ting a huge amount in procuring these devices, who­se efficacy was still not clear, the Court could procure sufficient number of pedestal fans/ wall fans and instal them at appropriate places in all the blocks.

The engineers informed the Comm­ittee that they would try to find out whe­­­ther previously installed hooks, meant for ceiling fans, were still available so that they could be re-installed. The Committee resolved: “Let PWD conduct a survey in this regard and submit a proposal regarding the required quantity of all such types of fans in every block. Since the windows and doors of Court Building may be required to be left open for proper circulation of air during the working hours, PWD shall ensure that all such windows have proper net/mesh so that no insect/mosquitoes etc. enter inside the court building.”

The Committee directed the registrar-general to get in touch with the Director General of Health Services and Chief Medical Officer and to apprise them ab­out the possibility of conducting pool-testing for Covid-19 for staff and visitors.

Another agenda was to assess the working of the present system in the High Court for hearing ur­gent matters through video-conferencing. As many officers and staff officials were coming to the Court for facilitating video-conferencing and discharging other administrative duties, it was re­solved that they should come by rotation and not consecutively. It was also to be ensured that they maintained a safe distance from one another and continued using sanitisers, masks and gloves.

The registrar-general was directed to seek inputs from all other registrars and prepare a flow chart describing how files, whether they be e-files or physical files, would move from one hand to the other before they reached judges holding courts through video-conferencing and also till the orders were uploaded on the website. This flow chart should also reflect per hour productivity of each dealing hand involved with the assigned tasks.

In order to further contain the spread of Covid-19, it was resolved that all advocates who visit this Court or subordinate courts for video-conferencing hearing need not wear coats, bands and ties. Also, to facilitate quick release of any accused/undertrial, a copy of the bail order passed by this Court should be sent through email to the Director General (Prison), Delhi, immediately by the concerned official. Every district and sessions judge, in coordination with the local bar, would create a facility for vi­deo-conferencing in their respective complex. It would cater to those advocates/litigants whose matters have been listed for hearing but who are not in a position to handle video-conferencing from their respective homes/offices.

The Committee also issued the following directions to various Family Courts in Delhi:

In a letter to the district and sessions judge-cum-special judge (PC Act) (CBI), all district and sessions jud­ges and all principal judges (Family Courts), Regis­trar-General Manoj Jain wrote: “Despite the fact that the functioning of courts is suspended during the lockdown, there is every attempt to alleviate the hardship of litigants by hearing urgent matters. All such hearings, as far as possible, need to be conducted through video-conferencing only.

“Every district, in coordination with the local Bar, is required to immediately create proper facility for video conferencing in respective District/Complex, if not already in place. This facility will ca­ter to those Advocates/Litigants whose matters have been listed for hearing but who are not in a position to handle vi­deo conferencing from their respective homes/offices. The compliance report of videoconference facility be sent to the Registrar at the earliest. If videoconferencing is not feasible in a given case, the crucial norms of social distancing be strictly adhered to during court-room hearings. It be also ensured that there is no crowding even in the corridors and other areas of the court-complex.”

Until a few years ago, what seemed a simple technological shift—the use of a camera for live meetings—was unthinkable in courts in India. The coronavirus has once and for all changed the way we engage, courts included, and it will be worth watching how the lessons of the recent past help in the future.