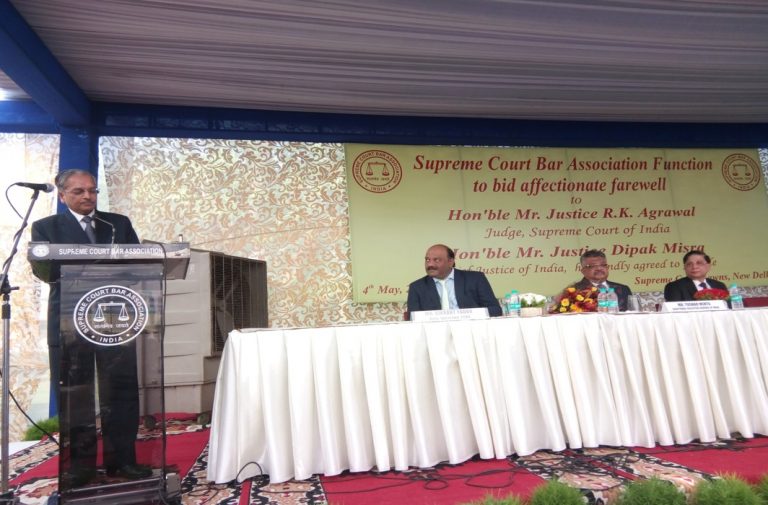 Above: Justice R K Agrawal speaking on the farewell ceremony organized by SCBA in Supreme Court on May 4/Photo: Anil Shakya

Justice R K Agrawal retired from the Supreme Court on Thursday (May 4). Justice Agrawal joined the apex court on February 17, 2014.

Justice Rajesh Kumar Agrawal hails from Uttar Pradesh. He was born on May 5, 1953 and did his graduation in Law from Allahabad University.

He enrolled as Advocate on August 14, 1976 and joined the chamber of his father Sri Raja Ram Agrawal, Senior Advocate and former Advocate General of Uttar Pradesh on Civil side and dealt with Constitutional, Company, Service, Educational and Taxation matters.

Justice Agrawal worked as Standing Counsel of the Income Tax Department of the Government of India and also served a number of corporations and institutions as their Standing Counsel.

Justice Agrawal thanked everyone in his farewell speech. He thanked all his fellow judges and members of the Bar.

He said that for the speedy disposal of cases it was necessary that the Bar and the Bench should work cooperatively and it was important for the common man to have faith in the judiciary.