An already slowing economy has been dealt a body blow by the pandemic as production and employment are hit, severely affecting the unorganised sector which employs 94 percent of the workforce. By Prof Arun Kumar 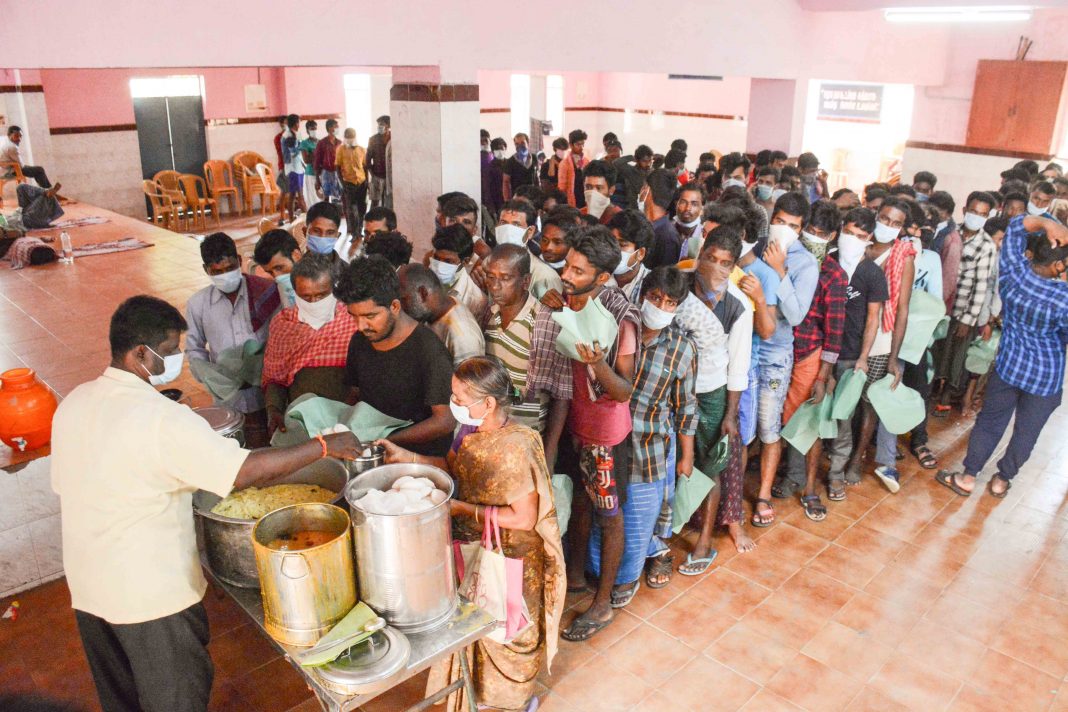 On March 24, Prime Minister Narendra Modi announced a complete lockdown for three weeks for 1.3 billion Indians. All hell broke loose for unorganised sector workers and in panic, large numbers of them started returning to their villages from towns. This put paid to the idea of isolating people to stop the community spread of the virus.

The PM’s decision was correct, if the experience of other countries is any guide, but the required preparation to implement such a drastic measure was missing. For instance, how would people who have lost work and incomes survive in their crowded kholis? These people believe that in their village they would have support and basic food and if they have to die, it is better to be with their own people. So what are the implications of an unprecedented situation like a lockdown?

Economic activity, except the production and distribution of essentials, has come to a halt. Stock markets, reflecting the negative mood, have tanked with investors losing trillions of dollars of global wealth. In India, these losses concern largely the top 3 percent in the income ladder. But these are largely paper losses. The wealthy have their savings to spend from but will cut consumption and investment, leading to a fall in demand. The 97 percent are the real sufferers and need assistance.

The middle classes and the poor, managers, professionals, self-employed and workers are facing the adverse impact on a wide range of businesses over the last month. Manufacturing, trade, transportation, tourism, hotels, airlines and so on are impacted. Malls, cinemas and so on have been closed. Use of taxis and buses has plummeted. Demand for petroleum products has declined and so also for cars. The economy is so inter-linked that this cascades down to production and employment in other areas. Organised sector workers are being told to take unpaid leave and pay cuts. Globally, governments are appealing to businesses not to retrench workers or cut their wages.

In the already slowing Indian economy, data from the RBI had pointed to decline in consumer confidence. Due to the fear factor, this has declined further. People were already spending on necessities and less on discretionary items. With the lockdown, this has stopped altogether.

The well-off, anticipating a lockdown, had increased their holding of cash and stocked up on essential items at home. Shelves in supermarkets across the globe have been emptied out. Payment via electronic forms and internet may increase as happened during demonetisation but overall, purchases will decline. The poor who have little savings cannot stock up on essentials. We need to plan to provide them with the essentials of life and health services, as and when they need them (possibly free).

The small sector which produces cheap products for the poor and ancillaries for the large and medium sectors has largely shut down. The cottage sectors are also in a similar situation. Orders are cancelled and using force majeure, payments are withheld, which puts pressure on working capital.

Even when the disease is controlled, there would be no working capital to restart production. The collateral used for taking loans is in danger of being encashed by lenders and/or the debt would balloon. NPAs are likely to rise as businesses fail or close down. Globally, many governments are addressing these issues.

Reports suggest that globally, health facilities are getting overwhelmed and choices are being made as to whom to treat. If this happens in India, and it can occur very quickly, given our situation of crowded living, poor hygiene and poor nutrition and weak health infrastructure, the poor will be at the tail end.

Commodity prices fall as demand declines, which should raise demand in normal times but this is not going to happen as consumer confidence is down. For instance, decline in petro goods prices will lower inflation but as travel is restricted, more of diesel will not be used. Prices of essentials will rise due to shortages and hoarding and not general inflation. There is a real danger of a deflation which can have a severe impact on the financial sector.

Interest rate cut by central banks like the Fed in the US and the RBI in India will not be effective as profits are evaporating. It will also not boost investment as capacity utilisation has declined. Highly leveraged companies can collapse as profits plummet. The finance sector, highly interconnected, will totter in spite of availability of liquidity. Fiscal policies can help maintain some demand via some employment generation and cash transfers or supply of free essentials to the needy. Increased expenditures on health facilities, basic infrastructure, preventing business failures and public distribution are some of the things that need to be done.

As production falls, government revenues will decline. But expenditures will rise due to the above-mentioned re­quirements. The arbitrary target of keeping fiscal deficit at 3 percent of the GDP has to be jettisoned. Clearly, this is not the usual business cycle in which monetary-fiscal policies can turn things around—they can only slow the economic collapse taking place. The only hope is that the virus dissipates soon.

In brief, the future is unknowable and therefore, always uncertain. One can deal with it when change is not large or too unexpected. Covid-19 has spread rapidly, creating acute uncertainty and produced both a supply shock and a demand collapse. This situation is worse than in a war with economic activity almost at a standstill and especially hurting those at the margins. They need to be taken care of if things are not to deteriorate further.