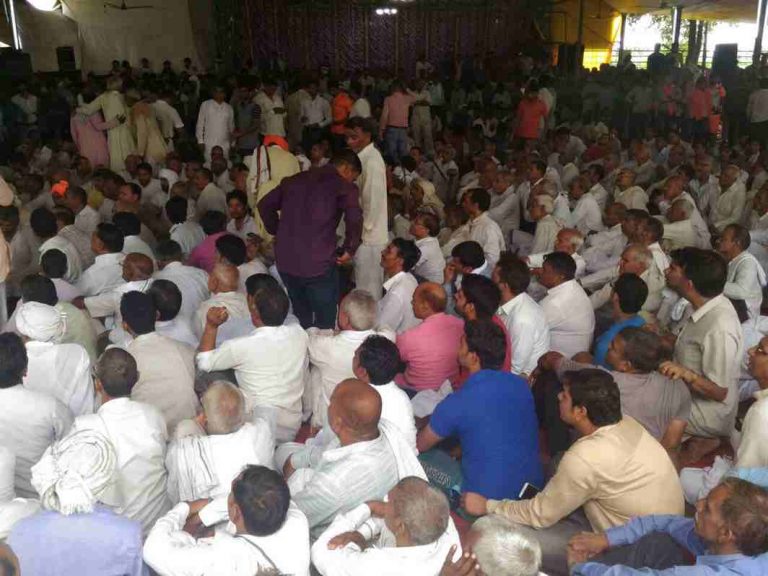 Above: Villagers participating in a Mahapanchayat related to the Junaid Khan lynching case in Palwal, Haryana. Khan was allegedly killed on a suburban train in June. Photo: UNI

While a petition has asked for laws against this crime, even the present provisions are not being enforced by agencies

Lynching, simply put, is murder by mob. But it is something more than a murder committed by an unlawful assembly. When the victim is accused of some crime and the mob, without giving him an opportunity to defend himself, brutally murders him as a punishment, it is lynching. Therefore, it is not only a crime against a person but it is also a crime against constitutional governance. Its seriousness will have to be weighed from this angle.

Incidents of lynching are now on the rise. Victims are normally members of minority communities and offenders claim to defend the culture, religion and even law. However, the enthusiasm of some, claiming to be followers of the philosophy for which the government stands, may destroy the credibility of the government and the constitution. The downfall has already begun.

Assuming that the protection of the cow is one of the holy causes, no sane person would believe that lynching serves the purpose. The intended or unintended purpose of such crimes is to create fear in the mind of a section of society. This fear often extends beyond the communities and citizens become apprehensive to do or express anything which the powerful persons may not like. This hurts the liberal democracy which has been assured by our constitution.

When people start taking the law into their hands and function both as prosecutors and judges, the whole constitutional system is endangered.

In the primitive stages of religious and social history, lynching was used for punishing certain crimes. When human rights were recognized and a democratic way of life was adopted, lynching was discarded and condemned.

A petition against lynching is being circulated on social media which would later be presented to the president of India and the prime minister. The move is initiated by Muslim India, an organization working for Muslims in India and their rights. However, the petition appears to have been subscribed to by people belonging to different religions.

When people start taking the law into their hands and function both as prosecutors and judges, the whole constitutional system is endangered. Equality before law remains a dead letter in the statute book. Thus, a crime of this nature has wider implications. Mere formal denunciation of the incident will not give an adequate message to the offenders. The determination of the state to deal with such crimes with a firm hand, irrespective of the political affiliations of the criminals, must be visible in its actions.

The offence of lynching has one more aspect which must worry all of us. Whether it is a girl molested in public in the presence of half-a-dozen people, a person stabbed in full public view or a man hit by a rash vehicle and lying in a pool of blood, the fact that no one comes to help them is worrisome. Have our sympathies become frozen by the political climate? Or is it an indication of people losing their faith in the administrative machinery of the state?

There is a demand that a more stringent law for lynching be enacted. That can surely be done. But the fault is not with the law. There are legal provisions presently which enable the guilty to be punished for lynching.