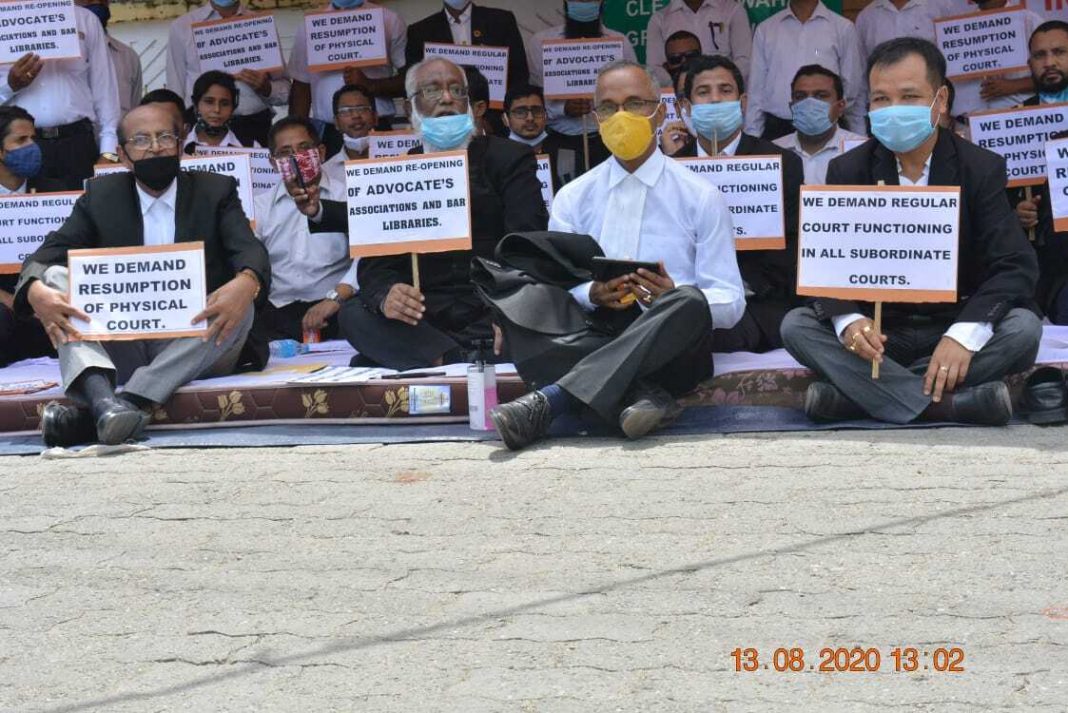 The Bar Council of Assam, Nagaland, Mizoram, Arunachal Pradesh, & Sikkim had adopted a resolution in the meeting held on 10/08/2020 to sit in demonstration in every Bar Association in N.E. Region under the Bar Council on, 13/08/2020 for resumption of physical court and opening of offices of Bar Associations under Gauhati High Court, Assam.

Accordingly, members of every Bar Associations had sat in demonstration in every Bar Association under Bar Council of Assam etc on 13/08/2020 and representations have been made to the Chief Justice of India through respective District Judge and, Registrars of Gauhati High Court and it’s benches.

Advocate Miss Monjuli Dev, Vice Chairman of Bar Council of Assam etc and a member of SCBA has also informed the India Legal that the representations have also been made to the Chief Justice of Gauhati High Court and the Chairman of both Bar Council of India and Bar Council of Assam etc. The representations have been made requesting for restoration of the physical courts and normalcy in the courts proceedings in relation to all courts including subordinate courts functioning under the jurisdiction of the Gauhati High Court.

It has been stated that while the competent authorities in the Government of India, the respective State Governments and respective Disaster Management Authorities have issued guidelines unlocking the lockdown with a view to revive the economy and restore normalcy, there doesn’t seem to be any logical, reasonable or plausible explanation for continuing complete closure of physical functioning of courts under the jurisdiction of the Gauhati High Court.

The representation reads that for conducting an effective hearing, a conducive environment is required, which is not available as court proceedings in Gauhati High Court are now being conducted only through video conference or virtual hearing, mostly using the Local Area Network of Gauhati High Court.

The representation has pointed out several problems being faced in wake of the court proceedings being conducted through video conferencing only;

• Problems in terms of connectivity, audio and video quality, time lag, difficulty in presentation of cases, judgments, reliance on documents, etc.
• Practical difficulties in implementing the statutory directions in respect of the trial of cases, both civil and criminal.
• Impossibility of going through original records of the cases for scrutinising documents, confronting the witnesses with those documents during evidence, etc in case of trials being conducted through video conferencing.
• The information and communication technology infrastructure, including internet connectivity, in this part of the country doesn’t enable virtual hearings to be conducted seamlessly.
• The majority members of the Bar not being well conversant with the use of information and communication technology so as to effectively use them present their cases on a virtual platform.
• The majority of the Advocates not being able to cope with the emergent shift to Virtual Courts due to both lack of infrastructure and comfort with technology. The right of access to justice of those litigants who are being represented by such advocates is being seriously impaired.

Regarding reopening of Bar rooms and Bar Association offices, the representation has stated that most of the lawyers in district Bars travel from afar to discharge their professional duties carrying briefs, documents, tiffins, etc. and the Bar provides a space of safety and security for them to deposit their belongings and pool resources such as printing, photocopying etc. With the continued shut down of the Bar rooms and Bar Association offices since the month of March, 2020, such lawyers have been deprived of any reasonable opportunity to practice their profession and earn a livelihood in these difficult times, pushing them to the brink of penury. It is, therefore requires that the Bars of the courts under the jurisdiction of the Gauhati High Court are allowed to be opened forthwith.

It has therefore been prayed that normalcy be returned in transacting the Court proceedings by doing away with the restrictive Court functioning and the staggered roster along with starting the Physical Court proceedings, delay in doing the same would have a catastrophic effect upon the litigants.

Below are the Pics of Lawyers protesting in the Gauhati High Court and the Courts subordinate to it.

Members of Dhubri Bar Association Sit in Demonstration (Pics Below)

Protest at Golaghat (Pics Below)

At Jorhat (Pics Below)

Did you find apk for android? You can find new Free Android Games and apps.
Share
Facebook
Twitter
Pinterest
WhatsApp
Previous articleBCI to request for basic laptops or iPads for needy lawyers
Next articleSC finds Bhushan guilty of contempt, punishment on Aug 20