All new Ministers are also slated to meet BJP President JP Nadda later in the day. 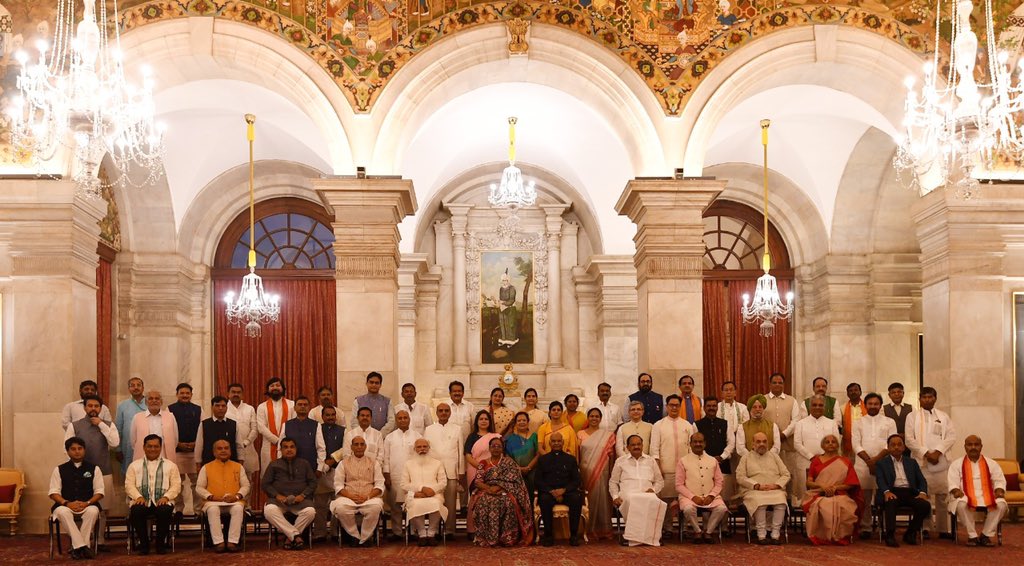 Hours after 43 Ministers, including 15 Cabinet and 28 Ministers of State took oath at the Darbar Hall of Rashtrapati Bhawan on Wednesday, their Portfolios were announced. Kiren Rijiju was chosen as the new Minister for Law and Justice, while Hardeep Singh Puri was given charge of the Ministry of Petroleum and the Ministry of Urban Development.

Piyush Goyal was made the Minister for Textiles, as also the Minister of Industries and Commerce Ministry, and IT & Communication.

The recently-announced Ministry of Cooperation was given as additional charge to Home Minister Amit Shah. The announcement of the new Ministry was made on Tuesday, with the aim of ‘Sahkar se Samriddhi’ (prosperity through cooperatives).

“On behalf of all friends, I express my gratitude to the Prime Minister, Home Minister, party chief and the entire team that they prioritised meritocracy and hard work. People used to speak of women empowerment but PM Modi made it possible that the country be led by empowered women,” said Meenakshi Lekhi, who was made Minister of State for Culture and also for External Affairs.

Mr Modi made some cautious moves by entrusting huge responsibility on young shoulders. He assigned key responsibilities such as IT and Communication to Wharton-educated Ashwini Vaishnaw, Health to Mansukh Mandaviya, Civil Aviation to Jyotiraditya Scindia, Education and Skill Development to Dharmendra Pradhan, Environment, and Labour and Employment to Bhupendra Yadav.

10. Hardeep Singh Puri: Minister of Petroleum and Natural Gas; and Minister of Housing and Urban Affairs

11. Mansukh Mandaviya: Minister of Health and Family Welfare; and Minister of Chemicals and Fertilizers

12. Bhupender Yadav: Minister of Environment, Forest and Climate Change; and Minister of Labour and Employment

15. Anurag Singh Thakur: Minister of Information and Broadcasting; and Minister of Youth Affairs and Sports

While Ramchandra Prasad Singh will be the new Steel Minister, Pashupati Kumar Paras has been made the Minister of Food Processing Industries.

Prime Minister Narendra Modi will be in charge of the Ministry of Personnel, Public Grievances and Pensions, Department of Atomic Energy, Department of Space, and all other portfolios not allocated to any Minister.