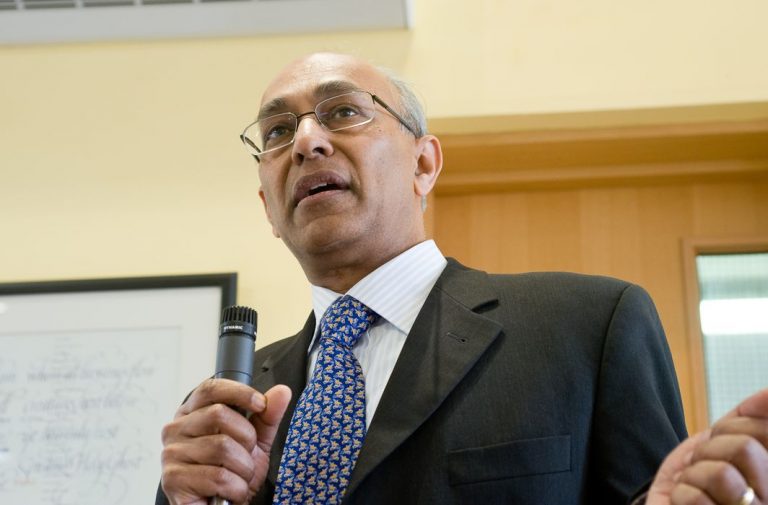 NO country in the world today has more young people than India has: a staggering 600 million!

And now a Cambridge, UK, based leadership guru of Indian origin is giving his bit to the country of his birth: a book in English and Hindi containing practical, leadership tips for excelling in life targeted at India’s marginalized youth. The irony is that it’s a “how-to succeed in life book” aimed at members of India’s backward communities from an author who belongs to a forward class.

Professor Prabhu Guptara, 69, grew up in India before moving to Europe where he worked with a number of globally renowned companies, and was for 15 years with the Swiss bank UBS where he was responsible primarily for Think Tanks looking at global trends in order to identify major opportunities and challenges for the bank as a whole. Helming one of the key positions for over 15 years at one of the largest banks in the world, he had the unique job of working with innovative, cutting-edge and outstanding people throughout the world to identify new ideas that might bring value to the company.

Today, he helps boards of companies and organizations with strategic, organizational, human resources, and market related issues. He has a portfolio of activities: board memberships, consultancy, leading actual projects dealing with a variety of global issues. In addition, teaching, mentoring youth and adding intellectual capital is a key concern for Guptara, after moving from Zurich, Switzerland, to Cambridge, UK.

Guptara told India Legal from Cambridge over phone that he always felt an obligation to do something meaningful for the younger lot: India has a huge demographic dividend right now with almost half of India’s 1.3 billion people below 30. They can be a dividend or a disaster depending on the kind of inputs they will receive.

Guptara, a reputed speaker and broadcaster who has been Chairman, CEO or board member of several companies and organizations like the Institute of Management at the University of St Gallen, Switzerland, and the Academic Council of GOPIO (the Global Organization of People of Indian Origin), headquartered in the USA, among others, says: “We, who have been privileged in life, have the duty to help our less-fortunate fellow-citizens. My tiny contribution to fulfilling that duty is in the form of this book, which is intended to instruct and inspire India’s youth.”

Author of several books, his work appears frequently in the world’s media.  A member of the jury of numerous literary, business and management competitions, he is included in Debrett’s People of Today.

The 150-page book Make the Best of Your Life: Letters to Bahujan Youth, released on August 23, 2018 by Forward Press, New Delhi, covers life skills, education and career issues.  The author claims that, though self-help books have been published for 150 years around the world, as far as he is aware this is “the first-ever self-help book written specifically for India’s Bahujans.” He clarifies that “Bahujan simply means the *majority* of India’s population, as distinct from the *minority* of upper castes and classes who have, from time immemorial, cornered the lion’s share of the country’s benefits.”

Currently executive director of Relational Analytics Ltd in Cambridge, UK, a company which has a unique system for measuring and improving the internal and external relationships of companies and organizations, the soft-spoken leadership coach says that India can aim to be a big winner if our youth power is harnessed optimally. Demography is the fundamental driver of all economies. Most Asian countries will see a rise in the elderly population – Asia alone will see at least half a billion by 2027 – while India will feature an extraordinary number of young people who can help India metamorphose into an economic superpower accounting for more than half of Asia’s workforce.

A World Bank report noted that India’s needs massive investment of multi-billion dollars to create lakhs of jobs, provide housing and infrastructure to meet soaring aspirations. The bank says India needs to create 8.1 million jobs a year to maintain its employment rate projecting the growth rate at 7+ per cent every year.

Even with all the high-sounding rhetoric from the national capital, New Delhi, about India as an emerging developed economy, the United Nations Development Programme has found that almost 800 million in India live on less than Rs 150 per day. The average Indian has gone to school for just five years. And less than three per cent of the Indian workforce has any formal training. Jobs for young people are hard to come by. Leadership tips for the youth, especially from the marginalized, will go a long way.

India’s unemployment rate is on the rise: two years ago, in 2016, when a state-owned organization called for applications to fill its 1,500 vacancies, a whopping 15 lakh people applied. Around a million people applied for less than a tenth of the jobs in the Indian Railway, the eighth largest employer in the world with a current workforce of 1.3 million. That is why entrepreneurship is so important.  But upgrading our entrepreneurs is a more complex challenge, requiring the creation of the right mix of investment funds specifically for micro- and mini-enterprises, alongside mentorship, and skill-development.

The book has tips that can help skill the readers. Less than 3 per cent of the Indian workforce has formal training in skills, that is, they are yet to become an asset. Compare this with South Korea which reports a phenomenal 96 per cent. If India has to create millions of productive jobs and call the shots in the global economy with its demographic dividend the young ones need to turn the right page. And, from the right book!

Hopefully, Professor Guptara’s literary offering could be one of those as his book joins a long list from the Indian diaspora who continue to give of their time, knowledge and money to their country of origin.

Many of India’s leading figures in politics, industry, academia and science have had a Cambridge connection for over 150 years: from cricketer Prince Ranjitsinhji and early Tata group pioneer Sir Dorabji Tata who went to Cambridge in the 1880s to even math wizards like Srinivasa Ramanujan. Astrophysicist Jayant Narlikar developed with his Cambridge doctoral guide Sir Fred Hoyle the commonly known Hoyle–Narlikar theory which synthesizes Einstein’s Theory of Relativity and Mach’s Principle. Not many know that Harivansh Rai Bachchan, Hindi poet and father of Bollywood star Amitabh Bachchan, was the second Indian to obtain a PhD in English at Cambridge in 1957. Three Indian prime ministers went to Cambridge:  Jawaharlal Nehru, his grand-son Rajiv Gandhi and Dr Manmohan Singh. Nobel prize winning economist and Bharat Ratna Amartya Sen became Master at Trinity, the first Asian to head an Oxbridge college.