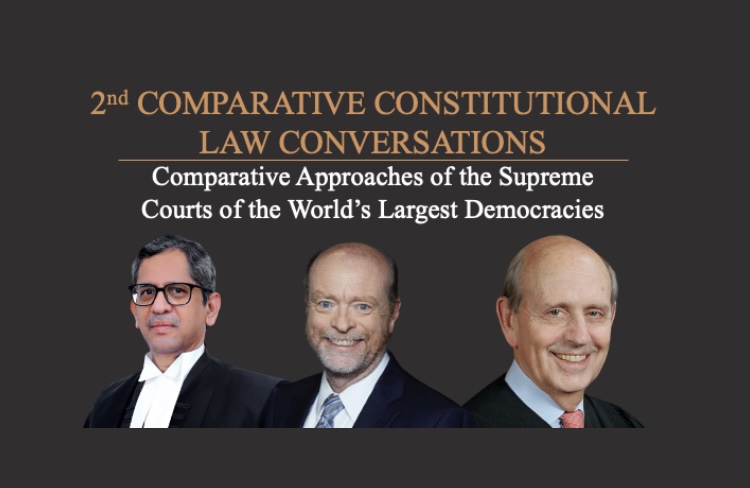 The webinar series which was launched on the occasion of 150 years celebrations of Georgetown Law is a collaborative initiative between Georgetown Law University, Washington D.C and the Society for Democratic Rights (SDR), New Delhi.

The webinar that today had well known guests from the field of law :

The Event was moderated by William M Treanor, Dean and Executive Vice President of the Georgetown University Law centre.

During the event, the moderator first questioned CJI Ramana on various issues

Moderator: What are views on the inclusivity in the judiciary in context to India?

CJI: SC of India is relatively young, just 72 year old but India is The World’s Biggest Democracy, making us the largest judicial network.He further said that the India has seen some remarkable work in the past few years, including 4 women judges on board, which is just the beginning and has created lot of inclusivity. He spoke the famous line “women of the World unite, we have nothing to lose” which he said resonated so well with the fraternity and people.

CJI in his poised style said that Inclusivity does not mean more women judges only, but also representing a population as large as 140 crore,which comes from  28 states and 8 union territories having 120 languages and thousands of dialects. More than 4000 communities and 700 tribes. He further said each one of them brings new social and geographical distinctiveness at all levels of Judiciary.With widest possible representation, people get to feel that it is their own judiciary. Diversity in the bench promotes diversity of opinions. Diversity enhances efficiency. People from different backgrounds enrich the bench with their diverse experiences.

Justice Breyer said that the job of judging is not political and it is important for people to understand that.

CJI Ramana concurred with the same.

“I loved the statement of Justice Breyer – the job of the judge is not political. I love this statement. Once you take oath, politics is no longer relevant. It is the Constitution that guides us,” the CJI underscored.

Independence of judiciary is non negotiable and people will trust judiciary only if it acts independently, he added.

CJI He said he feels happy to share that the outlook of his collegium members is very progressive. In the recent appointments they could select judges from 9 different states and out of them 3 were women. He said “I know that we have many miles to go but a beginning has been made”.

Moderator:-Does the length of Constitution impact the constitution interpretation of the two courts?

He further added that the Indian Constitution’s major judgement- Keshavananda Bharti prescribes the limits of Executive, Legislature as well as the Judiciary. The theory of basic structure was introduced and thereafter we are following the logic and reasoning of the judgement.

This is our way of interpreting the laws and the actions of the executive. There is a clear cut separation of powers. There are three organs of the constitution. We have marked clearly the role of the institutions.

Moderator– in contemporary Indian democracy, how relevant is PIL jurisdiction?

CJI :The PIL jurisdiction is an innovation of the Indian judiciary, particularly the Supreme Court. It is mainly meant for the marginalised people who cannot approach the court through advocates to expose their cause. The idea is to promote access to justice. Initially it started as post cards or letters. Which were enough to take up the cause in larger public interest. When it is necessary, he says the court looks beyond the locus stand to uphold the public interest. Apart from that the Supreme Court is closely monitoring various issues through PIL. For example the environmental issue, criminal cases pending against the elected public representatives, protection of Human rights. PIL has prevented cross- abuse of the executive power and checked the corruption to some levels and also sought accountability.

He further said Supreme Court and High Courts also impose certain restrictions of the misuse of PIL. The net outcome is more encouraging and positive. PIL is a tool and it’s an instrument to uphold the civil rights and take care of needs of the people who belong to the suppressed classes.

Moderator– Please elaborate how creation of a statutory body for augmenting infrastructure will substantially improve the delivery of justice in India?

CJI-Once we take the oath as a judge,the politics is no longer relevant and only the  constitution which guides us. From the days of my profession as an advocate,I have been noticing the poor conditions of the court’s, particularly in rural areas. Judicial infrastructure remains the most neglected areas in India.This is the subject which is on my priority list. And after assuming the office i requested my registry to conduct a survey to know the condition of the courts. The results were disappointing. In the interest of increased access of justice, I had to take up this issue on urgent basis. I sent a report to the government of India to create Infrastructure Corporation at national level as the state levels because the Pandemic has proved that the modern technology has to be an integral part of the infrastructure.

He also said that a conference shall be held in Delhi with Hon’ble PM , Chief Justices of the states, Chief Ministers of the states, along with law ministers for a final round of discussion,

Moderator:This August you would turn 65,isn’t that a young age to retire? What are your future plans?

CJI-It is indeed young age to retire at 65, but I have worked for almost 22 years as a high court judge, chief justice of HC, judge of SC and now the CJI.

In the Indian judiciary, at the time of joining we know our date of retirement. There are no exceptions. As for me, I am still left with decent amount of energy. I am a son of an agriculturalist. I am still left with some land to cultivate,” I’m basically a man of the people. I love being amongst people. One thing I’ll say for certain is that retirement from judiciary does not mean that I’ll retire from public life.
(Upon hearing the age of Justice Ramana and the fact that he was retiring in summer, Justice Bryer exclaimed: That is too young !)

Also Read: Rape is not against victim but society: Allahabad High Court

The moderator posed the same question to the US Supreme Court Judge about retirement at the age of 65, and are his retirement plans

US Supreme Court judge said “65 was too young to retire, a Judge must not think what he will do after retirement. When, I retire in this summer, I ll be 83 years old and will certainly not be thinking of my next job as there is no provision of retirement in USA

On being talked about the India having the largest legal aid system, Justice NV Ramana said “Our Constitution guarantees equal access to justice. The legal services authority provides the all legal advices by around 54 thousand paralegal volunteers, pre litigation mediation helps in lessor litigation for court. Our system can be replicated in developing countries of the world. It’s a great success, I am the patron in chief and the Chairman is the second most judge of the Court Mr Justice UU Lalit.

Talking about the  International Legal Education:

The US Supreme Court Justice Breyer said life has a way of coming in and it is good to have  studied LLM in United States. CJI however said that learning in a different land exposing you to different culture and its a good experience. It helps a lot, two way benefit. Every country should give this chance, its a holistic approach,

The US justice said that “we understand the systems, we contribute a lot. See students who learned from US are contributing a lot to Indian Judiciary, to this the CJI replied Our registrar is also from your university, I call them a good product of your university.

While talking about the merit appointment system

Moderator asked “how about the appointment of federal judges?

US Supreme Court judge Mr.Breyer said that appointing a federal judge is a political process, but at-least now its been in the political interest to appoint a person who is a qualified person. So now I feel merit does play a role, some times more, some time less

CJI Ramana: said that for the judicial system in India, people have an impression that Judges appoint Judges, it’s wrong, it’s done through a long consultative process. Look at the appointment of HC judge, once proposal is there, it’s sent to CM, then it goes to law ministry, after taking into consideration, it sent the proposal to The Supreme Court collegium. We will recommended the name to the top executive PM, then it sent to President of India. At every level consultation takes place. I don’t think it’s anywhere in the world. If the government sent the proposal back to the Supreme Court collegium, we look at it again after consulting and if we reiterate the name of person again and then government has to accept it ultimately.

Moderator: Any thoughts on the chief Justice’s statement, also on the appointment of Justice Brown Jackson , the first African-American woman Judge and also one who spent her formative years working for ?

US Supreme Court Justice Breyer said, he is glad as she is a very nice and decent person along with being intelligent . He thanked the Chief Justice of India. With the appointment of Justice Brown Jackson, there will be four out of 9 Justices as women and that does not mean the problem is over, the problem will be over when it is normal.

Dean William Treanor, the moderator thanked the US judge saying that “ I learned a lot from you. Mr Breyer and your book, The authority of the court and perils of politics.”

Justice Breyer smilingly said that the law is not something like physics, it deals with the people in society. I think it’s important for people to understand once you become a judge your thinking is different. The more people understand that we have a system people have a voice for selecting a judge..

About his trip to India ,Justice Breyer told CJI Ramana that

He went to Gujarat in India in (year 2001) and was shown a building with a big wooden porch roof. It was a building for women in this area, when they have something to complain about, suppose her husband abuses her, maybe their in-laws reserve money belonging to them, they’re all kinds of problems. Inside these rooms there is a psychologist there is a lawyer there is a social worker and the women explain their problems and those three women (psychologist, lawyer and social worker ) hear the problem and figure out how to help. He really appreciated the system.

The conversation ended on a happy note where everyone learnt a new thing.

The link of the webinar.