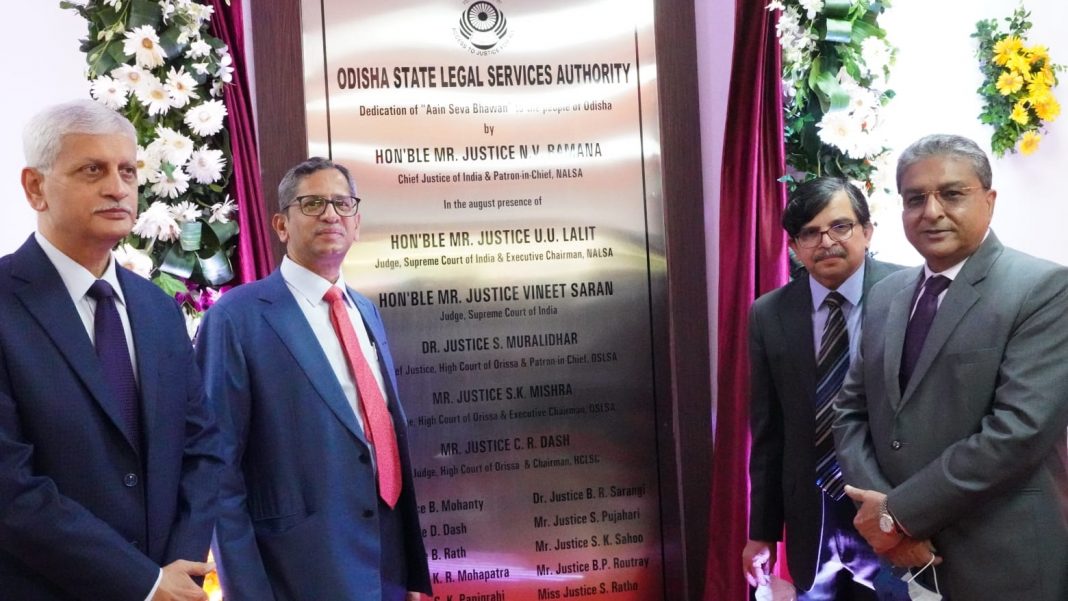 Chief Justice of India Justice N.V. Ramana on Friday said the legislature should revisit the laws and reform them to suit the needs of time and people.

Inaugurating the Aain Seva Bhawan, the new building of Odisha State Legal Service Authority (OSLSA) at Cuttack and dedicating it to the people of Odisha, the CJI congratulated Chief Justice of Orissa High Court, S. Muralidhar, who he stated was a dear friend and referred to him as ‘Murali’. He praised Justice Muralidhar for his hard work, leadership qualities and specially for his commitment and dedication to serve the people of Orissa.

The CJI said, “I emphasize, our laws must match with our practical realities. The executive has to match these efforts by way of simplifying the corresponding rules. Most importantly, the Executive and the Legislature should function in unison in realising the Constitutional aspirations. It is only then, that the Judiciary would not be compelled to step in as a law-maker and would only be left with the duty of applying and interpreting the same. At the end of the day, it is the harmonious functioning of the three Organs of the State that can remove the procedural barriers to justice.

“Although a harsh reality, often our legal system fails to take into consideration the social realities and implications. Sadly, our system is designed in such a way that by the time all the facts and law are churned in the court of law, much gets lost in the process. People might be bringing their problems to the courts, but what remains at the end of a day is yet another ‘case’,” he added.

According to the CJI, the Indian Judicial system is facing twin challenges – first, the ‘Indianisation of Justice delivery’ and second, enabling the people to “decode the justice delivery system by raising awareness”.

He said it is general understanding of people that it is the court’s responsibility to make laws. This notion has to be dispelled. This is where the role of other organs of the state – the Legislature and the Executive assumes great significance.

“These are the issues that I want to be addressed through Indianisation. The general belief is that it is the courts which are capable of addressing these concerns. But the stark reality is that unless the legal framework is drastically altered to make the justice delivery mechanism people friendly, we will not be able to achieve this goal,” he added.

According to the CJI, even after 74 years of independence, the traditional and agrarian societies, which have been following customary ways of life, still feel hesitant to approach the courts. The practices, procedures, language and everything of our Courts feels alien to them. Between the complex language of the acts and the process of justice delivery, the common man seems to lose control over the fate of his grievance. Often in this trajectory, the justice-seeker feels like an outsider to the system.

“We understand people need amelioration of their issues and grievances. Be it a matter of compensation or eviction or a customary issue of marriage and inheritance, a common man needs a faster remedy. The legal services authorities have a great responsibility upon themselves to boost the ADR mechanisms such as Lok Adalat, mediation and conciliation, so as to render justice, which is more inclusive, participatory, and definitely faster. Therefore, the legal services have become an integral part of the judicial administration. Lack of proper infrastructure and funds result in reduction of the activities carried out by these institutions. As a result, the number of beneficiaries who avail services of these institutions reduces. Ultimately the goal of access to justice for all gets hampered,” he said.

“If we want to retain the faith of our people, we need to strengthen not only the judicial infrastructure, but we also need to boost our outreach programs as well. Considering the gravity of the challenge, we have decided to launch a country-wide robust legal awareness mission in the upcoming week. I expect your cooperation and support to take this effort into the remotest corner,” added the CJI.

He said the cause and activities of legal services are very close to his heart. “I need not reiterate the provisions of the Constitution, however, I must reiterate that guarantee of equal justice formed the core belief of the framers of our constitution. Our constitutional aspirations shall never be achieved until the most vulnerable sections can enforce their rights.

The challenge of accessing justice gets magnified in states, which pose significant hurdles like regional and economic disparity. Particularly, in the state of Odisha, as per the last census, around 83.3 percent people are living in rural areas, and are often excluded from the formal justice delivery system. In such a scenario, the role of legal service institution assumes great importance, added Justice Ramana.

He said the concept of ‘Access to Justice’ in India is much broader than simply providing lawyers for representation before the courts. In India, the task to facilitate access to justice to the poor and marginalized has been conferred upon the Legal Services Institutions. Their activities include increasing legal awareness and legal literacy amongst such classes, who have traditionally remained outside the purview of the system.

Justice Ramana said the legal services authorities are dedicated to integrating and empowering the most vulnerable classes by providing them legal aid for the realization of their rights and entitlements. The legal services network reaches the persons residing in remote and far-flung areas to ensure inclusion of such persons into the justice delivery system.

The CJI appreciated the efforts put in by various stakeholders: the legal services authorities, the panel lawyers and the paralegal volunteers for showing immense flexibility and determination for the cause of justice, even during the difficult times.

He said, “Every intervention is a clear indication of the important position you hold in our justice delivery system. The power and strength of any justice-delivery system is derived from the faith of people in it. The Bar and Bench need to work in conjunction to affirm the faith that a citizen has in the justice delivery system. We are mere custodians. I am sure that you will be able to make use of this grand edifice, for the service of the people. In the spirit of selfless service, I would like to recite a few words by Utkala Mani Gopa Bandhu Das, “Manaba Jibana nuhen kebala barsa masa deena danda, Karme jeeyen naara, karma eka taara, jiba nara maana danda.” (Life of a man is not counted in terms of the time that he spent on earth. But the number of good deeds he undertook in his lifetime. Karma is the only law of life).

Supreme Court Judge, Justice Vineet Saran, who was present on the occasion, compared his visit to home-coming as previously, he had served as Chief Justice of Orissa High Court. He also informed the audience that the land for Aain Seva Bhawan was acquired in his tenure. Justice Saran highlighted the work of Orissa State Legal Services Authority and thanked Chief Justice of Orissa High Court for his guidance He said, its like home coming for me, everytime I come orissa, I feel I am back home. I am delighted to be invited, Orissa is a land of lord Jagarnath. Such a magnificiant place will come up with so many facilites. This building has been providing medical services to challenges faced in the era. It has put a great responsibility on Orissa state services, I hope that this new step today, will help in strengthening of the noble work.

Supreme Court Judge and executive Chairman of NALSA, Justice Uday Umesh Lalit said, “We could witness three monuments of excellence today. First the Building, second the record room and frankly speaking, I’ve never seen a room where records are maintained in such a good manner. It’s a fantastic achievements. Lastly, it is the Bhawan. This will be the benchmarks for the future. I am sure Orissa State Legal Service will be an example for everyone of our country. Now, the flame has to reach in every corner and every village. Even the NALSAR doesn’t have that kind of beautiful building. It is the work culture, which is definitely on exhibition and we could see the youngsters, they are not machine! They are humans guided by humans and the spirit, which will take you to places.”