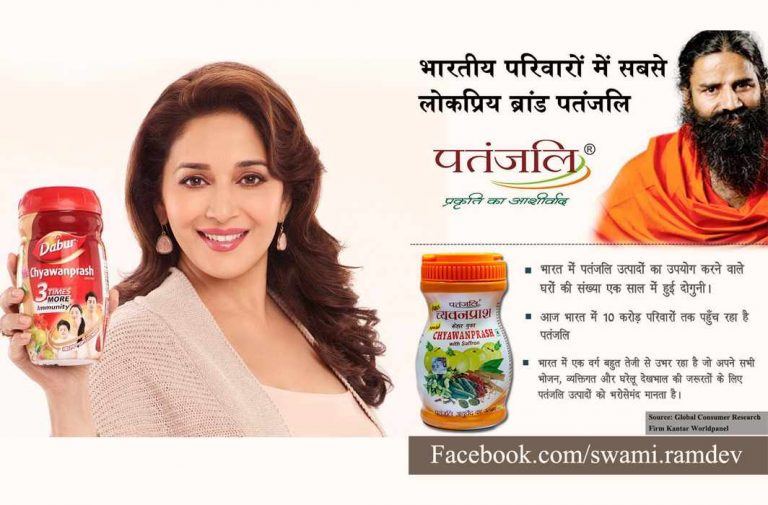 The Delhi High Court on Thursday (September 7) restrained Baba Ramdev’s Patanjali Ayurved Ltd from advertising/showcasing their version of Chaywanprash over social media, though the court refused to grant any ex-parte interim injunction.

The court was reacting to a plea from Ayurvedic FMCG major Dabur  India Ltd, saying that Patanjali’s “trade dress” in the ads were too similar to Dabur’s and illiterate and semi-literate customers could be fooled into mixing up the two brands. This is about an ad on social media in which a bottle with the trademark and name blurred was shown.

At the court of Acting Chief Justice Gita Mittal and Justice C Hari Shankar Dabur submitted that they began manufacturing of large range of pharmaceuticals products, toiletries, Ayurvedic and other medical preparations from 1884. They began their manufacturing of Chyawanprash from the 1956.

Dabur’s annual turnover is in excess of Rs 7,600 crores and the annual advertisement and publicity budget of the appellant for its various products is around Rs 646 crores.

Dabur said their Chyawanprash has received wide acceptance which is evident from the annual sales turnover which is over Rs 280 crores. They share the largest market share in the product category.

Dabur said it has adopted a unique distinctive “trade dress/packaging” for its product which is extensively red in colour with the brand name “Dabur” written in white over the red eye logo.

The appellant said that the “trade dress” has acquired distinctiveness as symbol of trade origin of the product in the minds of the consumer at large, more particularly, the class of consumers who may not be literate and may believing on their visual aid to recall the features of the product “Dabur Chyawanprash”.

The “trade dress” and the overall get up of the appellant’s “Dabur Chyawanprash” packaging on account of acquired distinctiveness, constitutes a trademark within the meaning of the Trademarks Act 1999 and thus it ought to be protected and prevented against the dilution, misuse, misappropriation and acts of infringement.

The respondent “Patanjali” is well-known manufacturer of the Ayurvedic products in India. The appellant only recently learnt that “Patanjali” has launched an advertisement campaign to promote its product “Patanjali Chyawanprash”. The impugned advertisement was uploaded on Facebook page of “Patanjali products” on August 24, 2017 and on the YouTube channel of the “Patanjali” on September 25, 2017. Dabur fears that this advertisement may be aired and circulated by the respondent on television soon.

In challenging the impugned advertisement by Patanjali, “Dabur Chyawanprash” earlier filed an appeal on September 1, 2017, before a single judge bench of the Delhi High Court but the court did not provide the relief of ex parte interim injunction against Patanjali. Hence the present application, against the order of the single judge bench.

On Thursday the bench ordered: “Dabur claims that bottle (of Patanjali) is deceptively similar to the “trade dress” used by Dabur for its Chyawanprash and the advertisement is aired solely with the view of disparaging its reputation and goodwill, plus (that) Patanjali is using the trade dress deceptively similar to that Dabur for its own product too.”

The Delhi High court held that an ex-parte ad-interim injunction should ensure only if a very strong prima-facie case is made out with respect to a Trademark which inherently distinctive in the advertisement on YouTube and Facebook. However, a stay on the ads on social media is on till the next date of hearing (September 26).