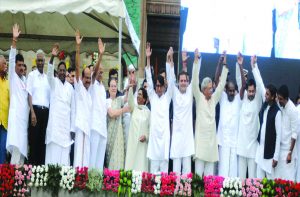 The swearing-in ceremony of Karnataka Chief Minister HD Kumaraswamy on May 23 proved to be the grandest show of unity yet among the non-NDA parties who, despite their ideological and political differences, are trying to cobble a front that could stop the Narendra Modi juggernaut in May 2019. The geniality between UPA chairperson Sonia Gandhi and BSP supremo Mayawati, knocking their foreheads, holding hands and waving to the crowds in a hitherto unseen public display of affection, made national headlines. What went relatively unreported, though, was the lukewarm camaraderie between Sonia and West Bengal Chief Minister Mamata Banerjee. While Banerjee greeted Sonia and her son, Congress President Rahul Gandhi, with her usual courtesy, she didn’t go overboard like Mayawati. The ceremony had also brought Banerjee and her arch rivals, CPI(M) General Secretary Sitaram Yechury and Kerala Chief Minister Pinarayi Vijayan, to the same dais. The Trinamool chief ensured that she wasn’t seen in the same frame as the Left leaders. Banerjee has been discussing the possibility of stitching a federal front, without the Congress playing a lead role. An all-out PDA with Sonia and Rahul, in such a scenario, would have sent mixed signals about her seriousness on forming the federal front.

No News Is Good News

Some of the aftershocks of recent economic experiments like demonetisation and the hasty implementation of the Goods and Services Tax are refusing to go away no matter how positive a face the government may want to put on these initiatives. Fearing adverse political consequences, the government has been instructed not to put out the latest employment statistics compiled by the secretary of labour which shows an estimated loss of two crore jobs during the last year. This figure (which some economists say is much lower than the reality on the ground) negates the Modi government’s boast of creating one crore jobs a year each year since 2014. The instructions are also meant for the 2018 statistics as well. The “jumla” hashtags are out again. 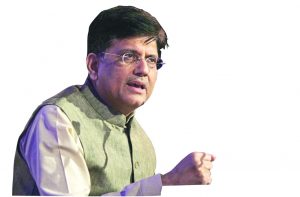 The rumour mills in Delhi are abuzz with speculation that Finance Minister Arun Jaitley, now convalescing from a kidney transplant, may not be recalled from his rest period to present the next budget before the election. The ebullient and erudite English-speaking face of the BJP is reportedly not pleased with some of the economic “initiatives” attributed to his ministry. The advisers appointed to serve him, including his OSD, have direct access to the Prime Minister’s Office.

Circles close to Jaitley also hint that “Arunji” is not too pleased with his “temporary” replacement, Railways Minister Piyush Goyal, who has been in the news because of allegedly dubious business deals benefiting companies linked to him through his position. This does not augur well for the party’s image. There is also an apparent conflict of interest. Goyal is also the BJP party treasurer, and critics maintain that putting a private party’s top finance man in charge of the nation’s treasury is not ethical or proper at all. 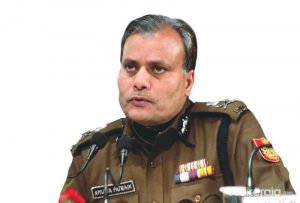 The capital’s police chiefs have been a friendly lot. The best known motto for their force was “With You Always”. Some of the notables among them include Ved Marwah, Vijay Karan, Arun Bhagat, MB Kaushal, Nikhil Kumar and TR Kakkar. Most of them followed an open door policy for citizens with grievances and reporters.

The current Commissioner, Amulya Patnaik, a 1985-batch officer of the AGMUT (Arunachal Pradesh, Goa, Mizoram and Union Territories) cadre, who took office in January 2017 after Alok Verma’s exit, is a bird of a different feather. He maintains a reclusive aura, preferring to communicate with the powers that be—the home ministry—rather than the hoi polloi (Greek for aam aadmi… pun intended!). He shunts off appointment seekers, including those from the Delhi government, to his factotums. An insider quipped that the new motto for the service should be “Without You, Always”.

Congress president Rahul Gandhi’s attempt to avoid an implosion within the Madhya Pradesh unit of his party ahead of the assembly polls due in the state in November was witnessed yet again recently when he constituted six poll-related committees for the MP Congress. After appointing Kamal Nath state Congress chief and Jyotiraditya Scindia as head of the campaign committee, thereby giving the two rival satraps key roles in MP politics, Rahul has now sought to pacify heads of the other two factions—former Chief Minister Digvijaya Singh and former Union Minister Suresh Pachouri. Digvijaya, sulking over being sidelined in state politics while his arch-rival, Scindia, bags plum roles, has been made chairman of the party’s coordination committee. His close aide and veteran MLA Rajendra Singh has been made chairman of the manifesto committee. Pachouri, whose term as PCC chief proved disastrous for the Congress during the 2008 assembly polls, has strangely been made head of the election planning and strategy committee. The big loser is Ajay Singh, Leader of Opposition in the MP assembly, whose name is missing from all six panels. Clearly, managing factional feuds in the MP Congress is proving to be a tightrope walk for Rahul.

Halt! Who Goes There? 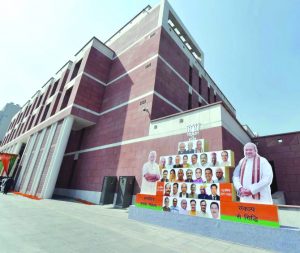 The BJP is supposed to be a “janata” or “people’s” party—a party with a difference with its ear to the ground. One of its proudest boasts was that, as compared to the aloofness of the imperious Gandhis occupying 10, Janpath guarded by zealous doorkeepers, its leaders mingled openly in an open door policy. That’s not quite how things are now.

Prime Minister Modi, except for larger-than-life appearances in political rallies and trips abroad, is hardly the approachable man he used to be. And the attitude seems to have trickled down to the BJP brass. Its swanky new headquarters at Deen Dayal Upadhyay Marg now has a caste system enforced by the elevator. If you wish to visit the fourth and fifth floors where the bigwigs sit, chances are you will never make it. The elevator will automatically come to a grinding halt after reaching the third floor from where the saffron party’s bouncers will let you proceed only if you are specially anointed.

Fuel prices are clearly the Modi government’s Achilles heel. At his first press conference following the Karnataka debacle, BJP President Amit Shah spoke on a range of issues, but when an NDTV reporter asked why his government had decided to increase the prices of petrol and diesel after freezing them for more than 15 days, coinciding with the poll campaign in Karnataka, Shah accused the journalist of running an agenda. Shah told him: “I will only talk about Karnataka today although I understand your agenda.”