Additional Chief Metropolitan Magistrate Aakash Jain passed the order after Disha was produced before him at the end of her five-days police custody remand. 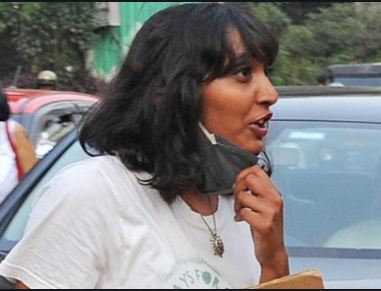 Arrested climate activist Disha Ravi, who has been charged with sedition in the toolkit case, was on Friday sent to three days judicial remand.

Additional Chief Metropolitan Magistrate Aakash Jain passed the order after Disha Ravi was produced before him at the end of her five-day police custody remand.

During the hearing, Public Prosecutor Irfan Ahmed informed the court that she remained evasive during the interrogation and has shifted the blame onto co-accused Shantanu and Nikita Jacob.

“Shantanu would come for investigation on February 22. We want to confront her with the other accused later hence we are seeking three days judicial remand,”

Responding to the submissions made by the police, advocate Siddharth Aggarwal, appearing for Disha Ravi, said, “I’m objecting to the manner in which case diary is being provided.”

“This is not a case diary in accordance of law and I should be released on that ground alone,” he added.

On Tuesday, a district court in Delhi had allowed her applications to speak to her mother, access to books, for providing her warm clothes, home cooked food and to have access to lawyer. The court had also allowed her access to the copy of charge-sheet, arrest memo, grounds of arrest and remand application.

She was arrested from Bangalore on February 13, 2021, by Delhi police and charged with sedition for ‘formulation and dissemination’ of a toolkit to aid protesting farmers which was shared by climate activist Greta Thunberg.

On February 14, 2021, she was produced before the Court of CMM, in the FIR No 49/2021. The Court had sent her to five-day police custody remand, which ended on Friday.