The situation is tense in Delhi with violence being reported from several parts following the clash between the police and the protesters. 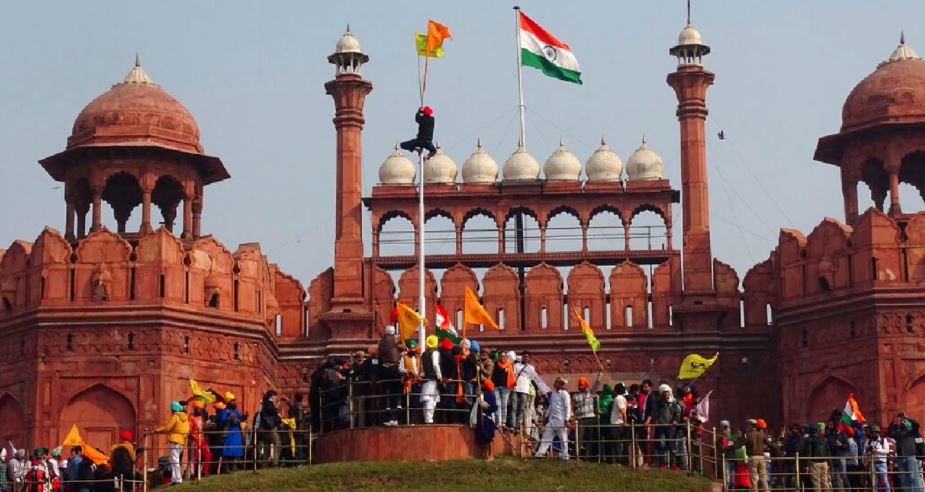 Following multiple rounds of inconclusive talks between the Centre and farmers over new farm laws, the protesting farmers are taking out a tractor rally on the occasion of Republic Day today. the protesting farmers are marching on both the tractors as well as on foot to protest against the Centre’s contentious legislation. Violence has been reported from several parts of Delhi with protesters clashing with the police. Earlier, the Delhi Police had granted permission to farmers to hold the tractor rally with 37 conditions. The rally marks the completion of two months of agitation against the farm laws.

Joint Commissioner of Police, Delhi said legal action will be taken against those people who assualted police personnel during tractor rally by farmers.

DMRC has tweeted the entry gates of Rohini Sector 18, Vidhan Sabha, Model Town and Inderlok are closed amid clashes between the Delhi Police and agitating famers.

People are claiming Deep Sidhu who is associated with BJP, hoisted the religious flag at Red fort.

Internet services have been temporarily suspended in many parts in Delhi amid clashes between the Delhi police and thousands of protesting farmers.

Delhi Police Commissioner SN Shrivastava asked to the protesting farmer not to indulge in violence, maintain peace and return through the designated routes

Samyukta Kisan Morcha has condemned the violence from one section of protesters. It has also thanked farmers for their unprecedented participation in tractor rally today.

Delhi police has issued a traffic advisory in view of the tractor rally taking place in Delhi.

Spokesperson of Bharatiya Kisan Union Rakesh Tikait said they know the people who belong to political parties and are trying to malign the agitation.

The protesting farmers have entered the Red Fort. They also hoisted their flags from the iconic building.

Visuals from the Red Fort showed farmers hoisting a sacred flag of Sikhs at a second flagpole. Thousands of others, waving the national flag, stood at the huge gates of the fort. The police were seen trying to control the crowd in vain.”We came here to deliver a message to the Modi government, our job is done. We will go back now,” one of the farmers told the reporter at the Red Fort. “We managed to reach the Fort even though they tried to stop us. We will not stop till we reach our goal — the repeal of the three farm laws,” another farmer said.

One person has died after a tractor overturned at DDU Marg in Delhi.

Disturbing visuals coming in from Delhi as protestors continue to clash with Delhi Police personnel.

Cops are trying to block the Nangloi area where the protesting farmers have reached with their tractors by sitting on the road.

Entry and exit gates of several metro stations in Delhi have been closed as per the Delhi Metro Rail Corporation.

Protesters have vandalised DTC buses in ITO area of Delhi. Violence is being reported from several places in Delhi with protesters clashing with the police.

The farmers’ tractor rally has moved towards central Delhi. Protesting farmers have reached ITO from Ghazipur border. Earlier, the farmers had said they would not be entering central Delhi.

Protesters have broken the barricades at Karnal bypass to enter Delhi where farmers tractor rally is currently underway.

Violence erupts at Delhi’s Mukabra Chowk after cops clashed with protesting farmers. Windows of at least seven buses were broken during the clashes.

Joint Commissioner of Police SS Yadav has requested the farmers to follow the route they are currently on. He says police is cooperating with farmers and they should do the same.

Chaotic scenes are emerging from Ghazipur border where the police have fired tear gas shells following farmers breaking the barricading.

Kisan Mazdoor Sangharsh Committee’s Satnam Singh Pannu has said police is stopping the farmers from moving towards Ring road. He said the route police was suggesting was not agreed upon.