While inaugurating the programs, Justice Lalit observed that the ongoing pandemic has taught us to innovate, improvise and to come up with technological solutions. He stated that now all the activities including the launched programs are based on technology and virtual platforms, which is a correct measure to take in these challenging times. 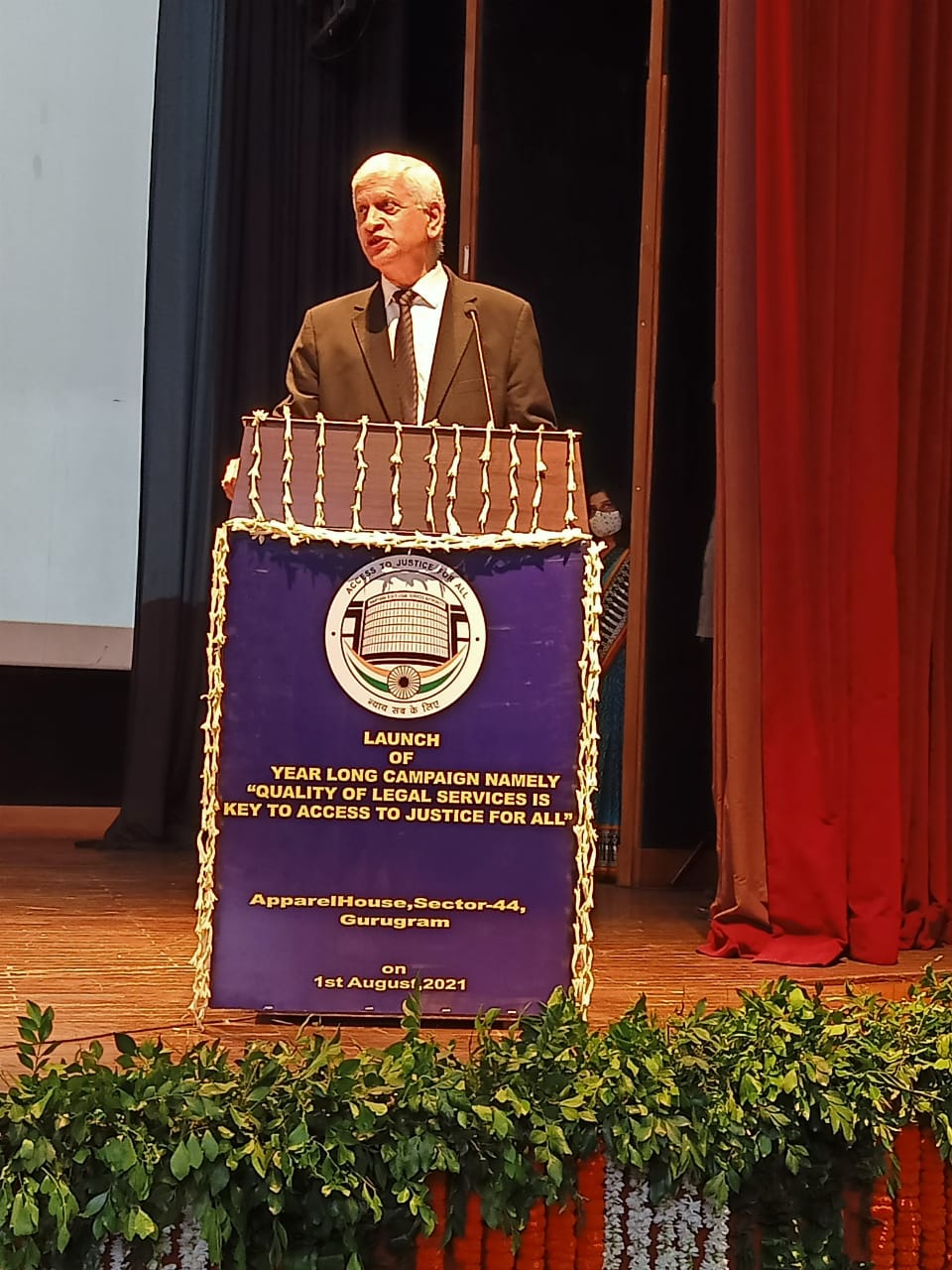 Supreme Court judge Justice U.U. Lalit, the Executive Chairman of National Legal Services Authority (NALSA), has called upon all the stakeholders to ensure that each Police Station in the country must have display boards informing about the Right to Legal Aid and the availability of free legal aid services.

Justice Lalit further stated that “such boards/posters are the first step in the direction to ensure that no accused remains unrepresented during any stage of the criminal investigation and the trial, so that every opportunity is afforded to a person to defend himself.”

While inaugurating the programs, Justice Lalit observed that the ongoing pandemic has taught us to innovate, improvise and to come up with technological solutions. He stated that now all the activities including the launched programs are based on technology and virtual platforms, which is a correct measure to take in these challenging times.

During his inaugural address, Justice Lalit recalled Lokmanya Bal Gangadhar Tilak on his 101st death anniversary and stated that “if, during the trial of Lokmanya Tilakin 1896-97, the Judges library of the Bombay High Court could be opened to affordhim all the opportunities to defend himself, we should also be able to provide same kind of opportunities in the present times.” He further emphasised on strengthening of legal services institutions to provide early access to justice at pre-arrest and arrest stage to ensure assistance at a time when the person is most vulnerable.

Justice Lalit also recalled his recent interactions with the Executive Chairpersons of SLSAs and the Chairpersons of High Court Legal Services Committees, which were organised in the month of June, a month after Justice Lalit took over as Executive Chairman of NALSA. Justice Lalit recalled that during the interactions, the idea to strengthen the framework of early access to justice at pre-arrest and arrest stage was deliberated upon and three takeaways were emerged out of the discussions:

“(i) installation of display boards/posters containing information about the availability of free legal services at all the police stations across the country to spread awareness amongst the suspects/accused visiting the jail premises; (ii) proactive measures to be taken by magistrates to ensure that an accused was made aware of his right to legal representation and if the accused is not aware, the magistrate shall inform him about his constitutional rightsand about the services provided by the legal services institutions; (iii) a column in the FIR should be added, whichwould inform the accused about his rights and would also provide contact details of the nearest Legal Services Authority.”

Justice Lalit commended the Haryana Legal Services Authority for launching informatory videos and other IEC material as well as for establishing Virtual Conferencing facilities at DLSAs, which can be utilised by the legal aid lawyers for appearing in courts and also for conducting meetings between the prisoners and their family members. He further commended HALSA for establishing Kids Zones in DLSAs, wherein kids accompanying the legal aid seekers can stay out of the tense environment and can ease themselves in a safe and conducive environment.

The welcome note of the event was delivered by Justice Rajan Gupta, Judge, High Court of Punjab & Haryana and Executive Chairman, HALSA. He stated that the ongoing pandemic has shown us the inequalities created in the society and emphasised on inclusive growth and sustainable development of the society. He recalled Mahatma Gandhi’s concept of development i.e., welfare of all through welfare of weakest and the poorest person of the society. At last, he highlighted various activities carried out by the HALSA to provide necessary assistance to the poor and marginalised during the pandemic.

The Keynote address of the event was delivered by Justice Ravi Shankar Jha, Chief Justice, Punjab and Haryana High Court and Patron-in-Chief, HALSA, who commended the work carried out by the Legal Services Institutions during the pandemic, especially release of prisoners on interim bail/parole and the immunisation drives carried out at various places such as, Court Complexes, Jails, Legal Services Institutions, etc.

Also Read: Supreme Court issues notice to all States, UTs against use of Section 66A, IT Act

The vote of thanks was delivered by Justice Jaswant Singh, Judge, High Court of Punjab & Haryana (Administrative Judge, Gurugram Sessions Division), who thanked Justice Lalit for his meaningful insights which will help in expansion of the legal services activities. He also highlighted Justice Lalit’s focus on absolute quick response from the beginning of a criminal investigation i.e., pre-arrest stage.