Kaath Baath: The yearning of Kashmiris for peace and coexistence 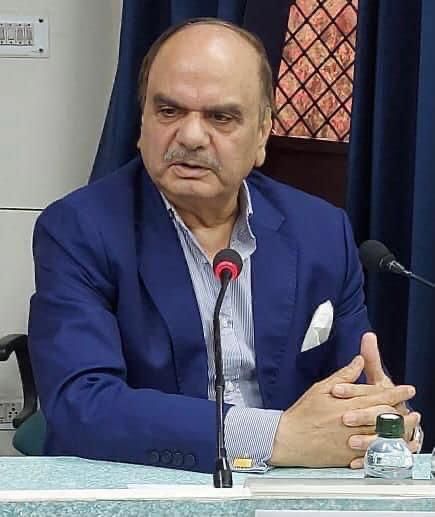 Kaath-Baath, a historical intra-community online dialogue, was facilitated by the Kashmir (Policy & Strategy) Group which was attended by prominent Kashmiris, and was widely appreciated.

The people who were part the online forum unanimously condemned the recent spate of innocent civilians by the hybrid militants terming them as an affront to the collective conscience of Kashmiriyat and the civilisational heritage of tolerance and mutual coexistence.

While condemning the act of brutal killings of innocent people they said that this against the tenets of all the religions and particularly the Islam-(whoever kills a soul, it is as if he had slain the entire mankind And whoever saves one,it is as if he saved mankind entirely).

While opening the dialogue, the Chairman of KPSG (Kashmir Policy & Strategy Group) Senior Advocate Ashok Bhan remarked that the targeted killings of innocent civilians both outsiders and from minorities has evoked large condemnation and protestations by the Kashmiri Muslims unlike any time.

He said that the Kashmiris have hit the streets in large numbers to protest against killings.

Talking about the political leadership across the spectrum, the civil society leaders, the spiritual and religious leaders strongly, he said all have condemned the killings.

There was a strong appeal to minorities especially to members of Kashmiri Pandit community who are living and working in the Valley not to be frightened to leave Kashmir.

Bhan said the regional political leadership had collectively met the LG Manoj Sinha to resolve the issues of insecurity of the KP employees and assured full support to the minorities.

Talking about “Kaath-Baath”, former Chief Secretary Mohd Shafi Pandit said Ashok Bhan’s doctrine of Kaath-Baath between the communities of Valley and Jammu is a noble cause which is timely taken.

The former Chief Secretary said that there is a dire need for this doctrine to transform into a larger meaningful structured one to involve all the professionals, religious and spiritual leaders and youth.

He also spoke about the trust deficit between various communities which is due to negative and competitive narratives along with the disinformation unleashed by vested interest (also some movie makers).

He believed that there is a dire need for more and more engagement between Kashmiri pandits and Muslims to defeat the anti Kashmiriyat narratives unitedly by all sections.

Suggestion was forwarded for constitution of a Truth & Reconciliation commission that can give a closure to all the negative narratives prevalent currently is the need of the hour which everyone agreed.

The former Vice-Chancellor Kashmir University, Prof Mehraj-udin, said, “The death & destruction by terrorists violence has so far not only devastated the demographic profile of the Valley but destroyed our age old coexistence and mutual trust.” He said the United Kashmiri communities shall act as a bulwark against attempted radicalisation and in restoring the Insaniyat and Kashmiriyat.

The Professor further said that there are multiple societal challenges in Kashmir and particularly the drug menace creeping in among the youth.

He also spoke in length about the absence of engagement with youth and opportunities lead youth to despondency and eventual drugs.

The professor praised the Bhan doctrine of Mutual dialogue and said it would go a long way in Kashmir as a truthful way out to help resolve social issues and terror free peaceful life to Kashmiri’s all sections.

Talking the the online forum, Vice-Chancellor of VK University Haryana, said the tolerance, amity, mutual trust and coexistence is the hallmark for a healthy society and history is replete with ages of Kashmiris living together as a shining example as a plural society with peaceful coexistence.

He said that in 1990 the bigotry, brutalities and killings of patriotic Muslims and Kashmiri Pandits led to exile of an entire community made Kashmir go through turbulence, radicalisation, devastation and despondency which made all communities suffer.

He said, “Now is the high time to adopt the Bhan doctrine of mutual understanding and intra communities dialogue” to bridge the wide trust gap and move forward unitedly as Kashmiris to salvage the prestige and glory of plural Kashmiri ethos while defeating nefariousness of the enemies of the people within and outside.

Kashmiris hit the streets in large numbers to protest against killings. There was a strong appeal to minorities especially to members of Kashmiri Pandit community who are living and working in the Valley not to be frightened to leave Kashmir.

This means to all that the Soul of Kashmiri ethos and plural societal values of “Kashmiriyat are alive”.

Social activist Imtiyaz Chesti said, “The Bhan doctrine of unity of all the Kashmiri communities shall culminate into a robust peace movement to defeat negative narratives unleashed by the vested and radicalised interests.”

It is necessary for us to fail and defeat the pernicious and negativity being spread about Kashmiris on national TV channels by giving space to anti-Kashmir panellists.

The social activist further said Kashmir belongs as much to aborigines and Kashmiris as to other natives.

Pandits are inseparable part of our Valley and its heritage. They should return back to their roots and physically contribute as in the past towards the newer plural, terror free and democratic Kashmir and promote the Bhan doctrine of coexistence.

Advocate Yasmeen Wani also put forward her point in the forum saying this initiative by Ashok Bhan must extend to youth and women of all communities eventually. She said that the new age youth of Kashmir is against gun culture and explore India as a land of opportunities like wise they carry a message of Kashmiriyat, so it is incumbent on KPSG to facilitate the intra youth and women dialogue.

Advocate Arshid Bashir said we as youth of Kashmir live, work, study and trade unhindered in different parts of India. They are loved compatriots. They prosper and surely appreciate the opportunity. Why aren’t they speaking up to secure the right to life of Kashmiri Pandits? Is this a fear or complacency.This is where the intra communities dialogue -Youth dialogue as said by my colleague Yasmeen becomes necessary.

We shall support the Bhan doctrine and work towards making it a peace and reconciliation movement to secure better collective terror free life for all Kashmiri communities in the Valley.

Dr Manmeet Bali, a professor in Manav Rachna University, and a native of Pulwama, said the engagement within communities of Valley is a noble initiative. The Sikh community is a stakeholder and has been on the receiving end since 1947.

Dr Bali said Sikhs have suffered loss of men, women and children in Chattisinghpora and elsewhere. In any process for resolution of Kashmir imbroglio and peace, the Sikhs should be part of the process as stakeholder.

Prof Raj Kachroo said that there is a great scope for intra communities dialogue process and Kashmiris are yearning for such a process.

The KPSG initiative seems to me as a credible and honest facilitator for such process let it evolve as a peace movement.

The president of Kashmiri Sabha Jammu, K Khosa, said the initiative shall eventually culminate into a structured dialogue. These dialogues must be tacitly supported by the government to achieve success.

Peace activist and Sharda movement convenor Ravinder Pandita said Kashmiri Muslims are supportive of all his efforts and he has been able to construct a temple on Indo-Pak border.

Across the Valley there is a warmth for the return of Kashmiri Pandits, the KPSG initiative of intra communities dialogue will reinforce the enthusiasm and warmth for KPs to come back home.

Former Sessions Judge BL Saraf said the Kashmiri Pandits craving to return home seems to be getting into reality.

The protestations and condemnation witnessed against the innocent killings of Pandits, Dogras, outsiders and native Muslims had defeated the nefariousness of hybrid militants and OWGs while same time it has rekindled the hope and resolve of Kashmiri Pandits to return home and Conjointly work towards the peace and revival of age old Kashmiri heritage and plural coexistence of communities.

The KPSG initiative is a welcome step as a ray of light in darkness.There were scores of participants from across the Kashmiri communities.