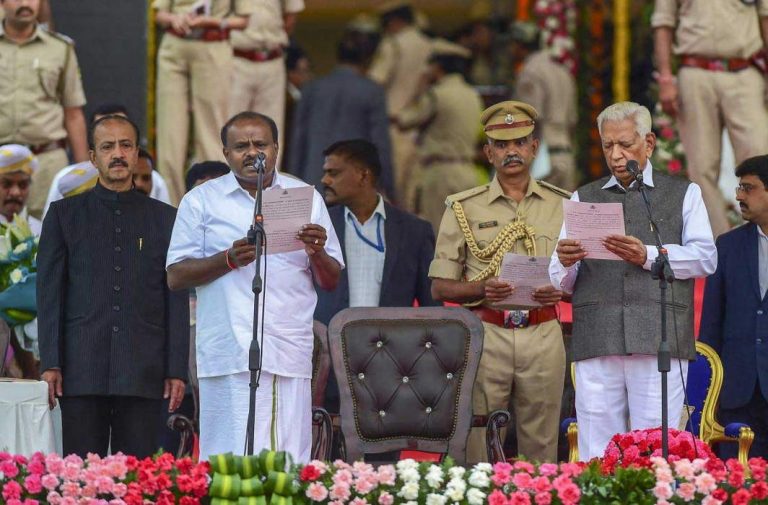 After Yeddyurappa’s resignation, another embarrassment for BJP as its candidate for Speaker’s post withdraws nomination, Congress nominee elected unanimously

Amid fears of cross-voting and poaching of his Congress-JD (S) coalition’s legislators by a bruised BJP, Karnataka chief minister KD Kumaraswamy won the floor test in Karnataka Vidhan Soudha, on May 25 (Friday), as the saffron party, still reeling under last week’s humiliation, staged a walk-out ahead of voting.

Expected as it was after the BJP walked out of the House ahead of the floor test, Kumaraswamy won the trust vote with 115 legislators – 77 of the Congress (excluding Speaker Ramesh Kumar), 36 from the JD-S (the party had won 37 seats but the tally is 36 as Kumaraswamy had contested and won from two seats), 1 from the BSP and 1 from the KPJP – voting in his favour.

The floor test, which came after the aborted attempt by BJP’s BS Yeddyurappa on May 19 to prove the BJP’s majority in the 224-member assembly, proved that the Congress and JD (S) managed to shield its 78 and 37 legislators respectively from the desperate attempts by the saffron party to either cross vote in its favour or abstain.

Given that the Congress-JD (S) coalition enjoys a wafer thin majority of just 117 seats against the magic figure of 113, cross voting or abstentions by legislators of the Treasury benches would have reduced the newly elected government’s numbers in the Vidhan Soudha and paved the way for its ouster.

However, the floor managers of the Congress and JD (S) who had been guarding their flock ever since the assembly polls threw a hung verdict on May 15 with the BJP emerging as the single largest party and staking its futile claim to form a government headed by Yeddyurappa, succeeded once again to prevent any implosion.

Moving the motion of confidence on the floor of the house, Kumaraswamy, who took oath as chief minister on May 23 in what was dubbed as the grandest show of Opposition unity with heads of almost all non-NDA parties present at the swearing-in ceremony, said: “The assembly polls have resulted in unique political developments… The people have not given me a complete mandate. The Opposition feels the mandate is theirs, but I am yet to understand how they believe it to be so.”

Recounting how the Congress turned the tables on the BJP shortly after the May 15 assembly polls result by offering unconditional support to the JD (S) to form a government that would keep the saffron party out of power, Kumaraswamy said: “Soon after results, I got a call from Dr. Parameshwara (Congress’ Karnataka unit chief who is now deputy chief minister) who suggested that Congress and Janata Dal (S) should join hands and form a government. I was not desirous of the CM post but I have been given a second chance to be CM. Those who helped me become CM (the BJP) for the first time are now sitting in the Opposition side.”

Taking a swipe at Yeddyurappa, who had to resign as chief minister last week after staying in office for just about 55 hours, Kumaraswamy said: “Last week, Yeddyurappa, as CM, thanked Prime Minister Narendra Modi for choosing him to lead the BJP in the polls. But, I am unable to understand how he made a statement that he will not allow any other party apart from the BJP to form the government in Karnataka. He is the custodian of democracy. We are now 118 in strength, including Congress, Janata Dal (S), BSP and independents. We submitted the letter to the Governor (Vajubhai Vala) requesting him to allow us to form the government. However, he chose to invite the single largest party and gave them 15 days’ time to prove their majority. This has not happened in other States.”

Kumaraswamy also conceded that his decision to ally with the BJP in the past to become the state’s chief minister had hurt his father, former prime minister HD Deve Gowda. “I am guilty of taking political decisions that have pained my father. The circumstances were such that I did not have much choice… My family has not hankered for power. We have worked for maintaining a secular identity. Today, people should not feel that I joined hands with Congress because I wanted to become the Chief Minister. I took the decision for the future of my party. I want to right the wrongs that I have done when I was previously the Chief Minister,” he said.

Recalling his past mistakes during his first stint as chief minister, Kumaraswamy said: “There were rumours that pained me a great deal when I was the Chief Minister. When I did not hand over power the first time (after the BJP moved to end the alliance with JD-S), I earned a lot of ill will. I had an agreement with Yeddyurappa and not the BJP’s leadership. I have borne the brunt of being labelled as someone who hasn’t kept his word for the past 10 years.”

He added: “BJP is questioning why Congress with 78 MLAs joined hands with JD(S) with 37 MLAs. I took the decision to right the wrongs of the past and remove the black mark that is on my father. I am grateful for the second chance. I am pained that the citizens did not bless JD(S) with majority.”

Yeddyurappa, whose 55-hour-long chief ministerial stint ended with him having egg on his face as he was forced to resign ahead of a floor test on May 19, spoke after Kumaraswamy, sounding like a case of sour grapes, as he said: “The democratic mandate has been sidelined for opportunistic politics.”

In remarks that almost sounded like an attempt to still win over some Congress legislators to the BJP’s side, Yeddyurappa chided Congress veteran DK Shivakumar, saying: “You will regret protecting the MLAs and reposing your trust in an untrustworthy person (Kumaraswamy). JD (S) lost their deposit in more than 120 seats, and has not won in 16 districts. And then all of you gang up to make a JD (S) leader the CM… I have no objection if you (DK Shivakumar and Congress) want to join Kumaraswamy in a sinking ship.” Shivakumar had played a key role in ensuring that Congress MLAs don’t defect to the BJP ahead of the floor test that Yeddyurappa was supposed to face on May 19.

After his bitter war of words against Siddaramaiah during the poll campaign, Yeddyurappa seemed to have developed extreme concern for the former chief minister, who led the Congress’ campaign in the polls but failed to return to power himself, even losing one of the two seats he contested the assembly election from. “I have decided to not speak against the Congress leaders. From now, our struggle will be against the corrupt father-son duo (of Deve Gowda and Kumaraswamy)… I ask chief minister Kumaraswamy, why did you not hold hands or bow to Siddaramaiah (at the swearing-in ceremony). You held hands and bowed down to leaders who had come down from different parts of the country. The citizens of the state were all watching this,” Yeddyurappa said.

As soon as Yeddyurappa finished his speech, all 104 BJP legislators shouted slogans of “shame, shame, shame” and staged a walk out, leaving the floor completely open to the Congress- JD (S) combine to comprehensively win the trust vote. The walk-out was coupled with a threat by Yeddyurappa – if the Kumaraswamy government doesn’t announce a loan waiver for the state’s farmers immediately, the BJP will carry out a state-wide bandh on May 28 in protest. The daggers between the Treasury and the Opposition are clearly drawn.

The BJP, humiliated after its tall claims of having the required number of legislators – including those from the Congress and JD (S) – to prove a majority in the house fell flat and forced Yeddyurappa to step down from the chief minister’s post ahead of the floor test on May 19, however, did make another attempt at political brinkmanship. The party had got its five-term MLA S Suresh Kumar to file his nomination for the election of the Assembly Speaker, pitting him against Congress nominee KR Ramesh Kumar. Perhaps realising that without the requisite number of legislators within its ranks to ensure its candidates victory and none from the Treasury falling for the allurements to cross vote, the BJP got Suresh Kumar to withdraw his nomination at the last minute.

The BJP did try to downplay the embarrassment of losing out on the Speaker’s post by taking the high moral ground with Yeddyurappa and Suresh Kumar both claiming that the nomination was withdrawn as the “BJP wanted the election of the Speaker to be unanimous in order to maintain the dignity of the Speaker’s post and in keeping with the legislature’s tradition”.

Soon after Ramesh Kumar’s unanimous election to the post of Speaker, legislators from all political hues congratulated him while lauding his experience as an MLA.

Former chief minister Siddaramaiah said: “We are sent here by the people to discuss issues on their behalf. There must be emphasis on the development of the State. The new MLAs must cooperate and your experience as Speaker will be helpful in this regard. This is an alliance government; it may be difficult to manage. As Speaker, you have the strength to ensure that the House functions well.”

BJP leader Govind M. Karjol assured the newly elected Speaker that the “BJP will cooperate with the House proceedings” while Congress veteran DK Shivakumar, who played a key role in ensuring the MLAs from his party and the JD (S) do not switch over to the BJP ahead of the floor test, recollected Ramesh Kumar earlier tenure as Speaker and how it had helped new MLAs in learning about House proceedings. “With his election again as Speaker, the chair has got new respect. You took us to Hyderabad for training and better understanding of how the Assembly works… There is no one more suitable for the Speaker’s post than you,” Shivakumar said.

Shivakumar also applauded BJP leader S Suresh Kumar for his decision to withdraw his nomination for the Speaker’s post, stating that the move was “commendable”.