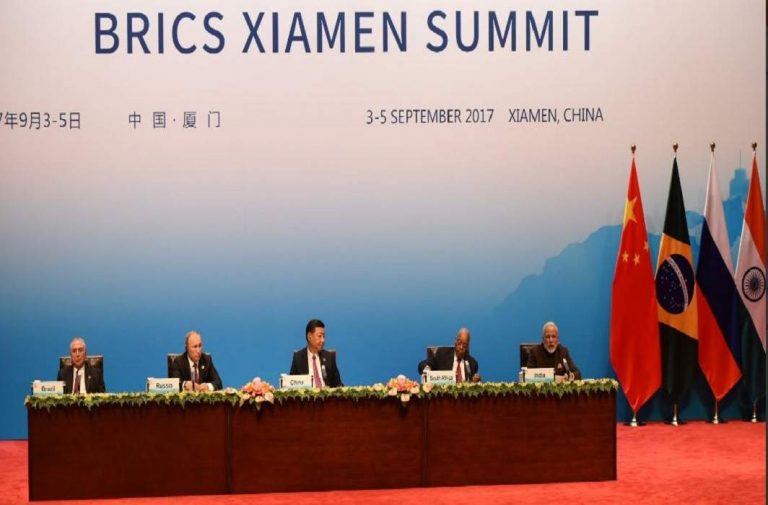 The Xiamen declaration by Brazil, Russia, India, China and South Africa calls for “expeditious finalisation and adoption of the Comprehensive Convention on International Terrorism (CCIT) by the United Nations General Assembly.”

In a significant boost for India’s fight against terrorism emanating from Pakistani soil, a declaration issued by heads of state of Brazil, Russia, China, India and South Africa at the ongoing BRICS Summit in Xiamen, China for the first time named terror groups like Lashkar-e-Taiba (LeT) and Jaish-e-Mohammad (JeM) while condemning terrorism and finding ways to eliminate it.

The Xiamen declaration, adopted by the five BRICS nations, called for “call for expeditious finalisation and adoption of the Comprehensive Convention on International Terrorism (CCIT) by the United Nations General Assembly (UNGA)” and a need for the “international community to establish a genuinely broad international counter-terrorism coalition”.

The declaration can be viewed as a major victory for India’s diplomatic corps which has been working at various international platforms, like the UN, G-20 and BRICS, to build an global front against the sponsoring of terrorist activity by the Pakistani establishment despite concerted attempts by the People’s Republic of China in blocking such moves.

The declaration issued, on Monday, not only re-establishes the support that Prime Minister Narendra Modi’s government enjoys from regimes across the globe in its quest for fighting ‘Islamic’ terror but also the fact that China was being isolated in the international arena over its attempts to shield Pakistan from any kind of censure over terrorism.

The declaration — which all five BRICS nations, including China are signatories to — also weakens Beijing’s case on its efforts to stall the United Nation’s Security Council proposal on declaring JeM chief Masood Azhar as a ‘global terrorist’. In early August, China had extended, by three months, its technical hold on the US, France and UK-backed proposal of having Masood Azhar designated as a terrorist by the UNSC even though his outfit, JeM, had already been declared as a terrorist organisation by the body.

Although the Xiamen declaration does not expressly mention the threat of terrorism to India, it talks at length about terrorist strikes in neighbouring Afghanistan, which has been a victim of attacks perpetrated by some of the same Pakistan-based terror outfits which have repeatedly carried out strikes on Indian soil.

“We strongly condemn terrorist attacks resulting in death to innocent Afghan nationals. There is a need for immediate cessation of violence… We support the efforts of the Afghan National Defense and Security Forces in fighting terrorist organizations…We, in this regard, express concern on the security situation in the region and violence caused by the Taliban, ISIL/DAISH, Al-Qaida and its affiliates including Eastern Turkistan Islamic Movement, Islamic Movement of Uzbekistan, the Haqqani network, Lashkar-e-Taiba, Jaish-e-Mohammad, TTP and Hizb ut-Tahrir,” the BRICS declaration states.

The declaration adds: “We deplore all terrorist attacks worldwide, including attacks in BRICS countries, and condemn terrorism in all its forms and manifestations wherever committed and by whomsoever and stress that there can be no justification whatsoever for any act of terrorism. We reaffirm that those responsible for committing, organizing, or supporting terrorist acts must be held accountable.”

At a time when various Indian investigative agencies are carrying out joint probes against individuals and organisations in the strife-torn state of Jammu and Kashmir for purportedly receiving money from their Pakistani handlers for ‘terror funding’, the BRICS nations have also called for “blocking sources of financing terrorism”.

“We call upon all nations to adopt a comprehensive approach in combating terrorism, which should include countering radicalization, recruitment, movement of terrorists including Foreign Terrorist Fighters, blocking sources of financing terrorism including, through organized crime by means of money-laundering, supply of weapons, drug trafficking and other criminal activities, dismantling terrorist bases, and countering misuse of the Internet including social media by terrorist entities,” the declaration said.

At a restricted session held during the summit, Prime Minister Narendra Modi called for a joint counter-terror strategy and suggested a new mechanism to counter-radicalisation in the region. India has also offered to hold an international conference in this regard.

In what can also be viewed as an endorsement of India’s stand on its inclusion in the elite Nuclear Suppliers Group (NSG) and making this club more accessible for other robust economies around the world, the BRICS nations also backed “open, flexible and transparent markets for energy commodities and technologies”.

The declaration said: “We underline the importance of predictability in accessing technology and finance for expansion of civil nuclear energy capacity which would contribute to sustainable development in BRICS countries.”

However, it remains to be seen whether the declaration that endorses India’s demand for accessing technology and finance for expanding its civil nuclear energy will eventually mark a real shift in Beijing’s stand India’s bid to enter the NSG – an effort that the Dragon has blocked consistently in the past.