Mamata Banerjee to contest from Nandigram, likely to face Suvendu Adhikari if BJP fields him 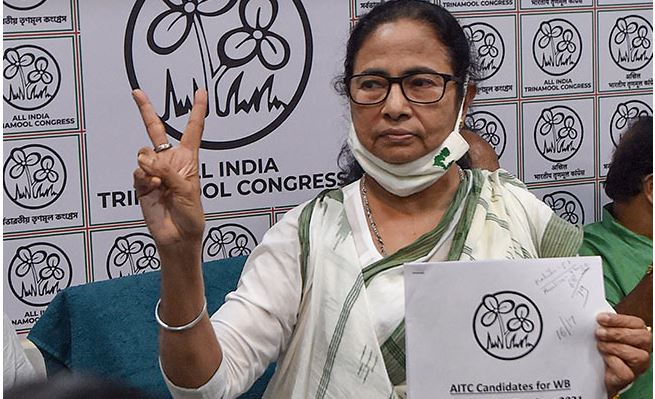 West Bengal Chief Minister Mamata Banerjee on Friday confirmed that she will contest from Nandigram constituency, the stronghold of Suvendu Adhikari who recently switched sides and joined the BJP in December 2020.

Releasing a list of 291 Trinamool Congress candidates for the 2021 West Bengal elections, she said the party will contest from 291 seats out of the total 294 and the remaining seats in Darjeeling would be contested by allies.

The West Bengal CM’s decision to contest from Nandigram vacating her own Bhabanipore seat in Kolkata means she’s more than eager to take on the challenge thrown by Adhikari, her one-time right hand.

Announcing the list of 291 candidates for the upcoming polls, Banejee said she would contest from Nandigram and still stick to her words. She also confirmed Sobhandeb Chattopadhyay’s name from Bhabanipore constituency.

In the list of 291 candidates, Trinamool Congress has dropped over 20 sitting MLAs and top ministers, including Partha Chattopadhyay and Amit Mitra. Banerjee said Mitra will give the 2021 election a miss due to failing health. Mitra could not even place the Budget this year.

Many others aged above 80 years have also been dropped from the TMC list. In the list, there are 50 women candidates, 42 Muslim candidates, 79 Scheduled Castes (SC) and 17 Scheduled Tribes (ST) candidates.

Banerjee told the media that the party has given tickets to eminent personalities from arts, sports, media and culture. She urged the people of Bengal to have faith in her and said only TMC can take Bengal to new heights.

Banerjee announced the list on Friday as she had done in the 2016 and 2011 elections as well. Attacking the BJP, Banerjee said that Home Minister Amit Shah and Prime Minister Narendra Modi can send as much force they want but TMC will win elections. She also thanked Opposition leaders such as Tejashwi Yadav, Arvind Kejriwal, Hemant Soren and Shiv Sena for extending their support to the Trinamool Congress in West Bengal.

Adhikari has told the BJP’s central leadership that he is keen to contest from the Nandigram seat against the Chief Minister Mamata Banerjee. Adhikari had won the seat in the 2016 Assembly polls while Banerjee emerged victorious from the Bhabanipore Assembly segment in Kolkata.

The final decision on Adhikari’s candidature will be taken by the BJP’s central election committee (CEC), which met in the presence of Prime Minister Narendra Modi and other top BJP leaders.