Maratha Reservation: SC hears arguments on if 50%-plus reservation issue has to go to 11-judge bench 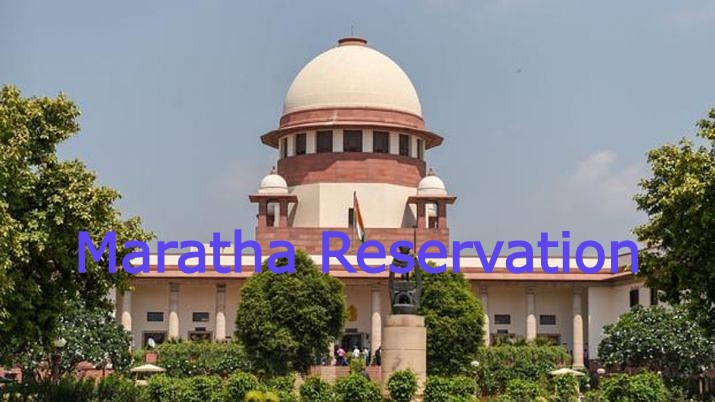 New Delhi: The Supreme Court today heard arguments regarding the question of whether States can exceed 50 percent ceiling on reservation, to be referred to an 11-judge bench.

A three-judge Bench of Justices L. Nageswara Rao, Hemant Gupta and S. Ravindra Bhat heard the Counsels argue in length over whether the issue of States exceeding 50 percent ceiling on reservation can be referred to a 11-judge Bench of the Apex Court.

During the hearing today, Senior Counsel Abhishek Manu Singhvi referred to the Supreme Court’s recent judgement in the case of EV Chinnaiah vs State of Andhra Pradesh, which was referred to a Constitution Bench of 7 Judges or more. He stated that no judgement, to his knowledge, has dealt with the direct interplay between the 50% reservation cap and Articles 15(4) and 15(5).

Justice Bhat stated that the question of erosion of State’s autonomy may not arise here, its not denuded under Article 340.

Singhvi went on to cite the Supreme Court’s judgement in the Sabarimala review petitions where the larger questions were placed before a Constitution Bench of larger strength. There are many States with over 50 percent reservation and on this ground alone there should be a reference of the issues to a larger Bench.

Senior Counsel PS Patwalia referring to the judgment in Janhit Abhiyan case concerning EWS reservation, stated that the ceiling of 50 percent reservation is the main issue which is being considered here as that ceiling cannot be violated. When this debate is already referred and pending to be heard by a 5-Judge Constitution Bench then the issue in the instant case must also be referred to a larger Bench. If an Act of legislation or constitutional amendment for breaching the 50% cap, is being considered it should be referred to a larger Bench.

Mr Patwalia submitted that Article 348 and 342 have specifically been referred to the larger Bench by virtue of of the judgement delivered yesterday in case of State of Punjab vs Devinder Singh, and therefore its only fair and proper for the present matter to also be referred to a larger Bench.

Senior Advocate Rafique Dada appearing for an applicant referred to the Devinder Singh case, and stated that the judgment talks about State’s powers to give reservation and the adequate representation. Seminal issue which has been referred is the interpretation of these Articles and the interplay between these articles and those are the issues in the present case also.

Advocate Sudhanshu Choudhari for one of the Respondents referred to the judgment in case of B. Archana Reddy vs State of Andhra Pradesh where the very question of Article 15(4) has been referred to a larger Bench by the Supreme Court.

“Let us make one thing clear that just because some point was referred to a larger Bench does not mean we will refer everything to a larger Bench. You have made your point, do not keep citing cases,” Justice L. Nageswara Rao said

Senior Advocate Arvind Datar made his submissions as to why the Case shouldn’t be referred to a larger Bench. He informed the Court that they had submitted before the Bombay High Court that if any State wants to cross the 50% limit, they must make a parliamentary law. Calling the entire Application premature, he stated that if its felt that the SEBC Act falls foul of Indira Sawhney then that is the end of the matter.

Justice Rao reminded Mr. Datar that he was the one who had argued before the High Court on the interpretation of Articles 338 and 342. Datar responded by saying that if the Bench agrees with the High Court’s position then the matter may not be needed to be referred to a larger Bench

Datar submitted that present only Tamil Nadu has crossed 50 percent and Rajasthan which is pending before Jodhpur Bench. Every other State is under 50% , and the breach of 50 percent by States other than Tamil Nadu and Rajasthan was done only after 103rd amendment. Therefore the argument made by Kapil Sibal that 29 States have crossed 50% is not correct

Senior Counsel Shyam Divan appearing on behalf of some medical students requested the Court to defer the question of reference for now and continue with the hearing on final disposal. He referred to all the committees that arrived at the conclusion that Maratha community is not a socially or economically backward community.

Mr. Divan requested the Court to let the case and hearing progress, as if the Bench concludes that the reservation should remain within 50% and that the Maratha community is not deserving of being considered as backward community then the case ends there.

Senior Counsel Gopal Sankaranarayanan submitted before the Court, several cases concerning reservation where State laws were challenged and were decided by 2-Judge Benches. He added that if a ceiling of 50% was laid down and this ceiling has sustained through time and through decisions of this Court, then how can this argument now suddenly be raised at the behest of a respondent in this case who has not even challenged constitution amendment.

“ In every single case after Indra Sawhney, every question referred to a five-Judge Bench but here argument is being made to refer the case to 11-Judge Bench… We haven’t had one in 18 years” – Gopal Sankaranarayanan said.

Advocate Amit Anand Tiwari, while citing the Janhit Abhiyan judgement, stated that the rule of 50 percent was acknowledged and what was referred was if this cap can be breached by a constitutional amendment, in this case, it being a statutory enactment. He added that there is no significant question of law which needs to be referred to a larger Bench.

The Supreme Court had on July 27, refused to pass interim stay on the Maratha reservation issue till September 1, after getting assurance from the state government that no recruitment will be made till September 15. The Court had decided that it will first examine whether the issue should be referred to a constitution bench. The bench has listed the matter for next hearing on September 1.

The matter pertains to a the Socially and Educationally Backward Classes Act 2018, introduced by the Maharashtra government that grants 12 per cent reservation for Maratha community in education and 13 per cent quota in appointment to public service jobs in the state.

The Act was introduced with the purpose of extending reservation benefits to the Maratha community. The Act originally provided 16 per cent reservation to Marathas in public service jobs and education in the state. Later, it was challenged before the Bombay High Court which upheld the validity of the law but reduced it to 12 per cent in admissions and 13 percent in jobs. Thereafter the state government amended the act accordingly.

A batch of 15 petitions has challenged the law on the ground that it breaches the 50 per cent reservation threshold prescribed in the landmark judgment rendered by the Supreme Court in Indra Sawhney in 1992.