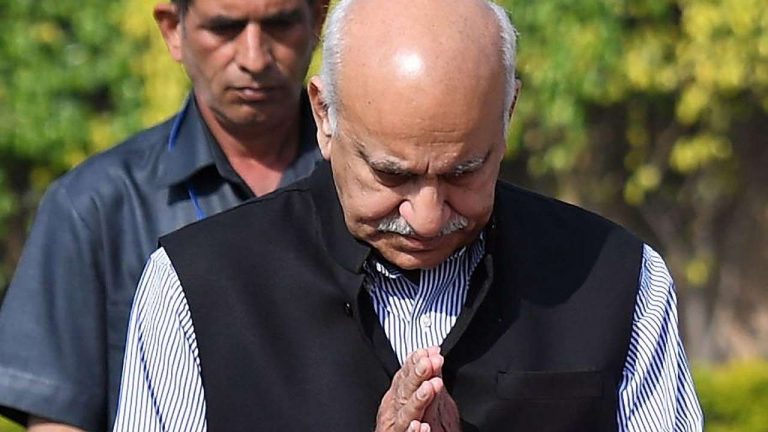 Pallavi Gogoi is presently the chief business editor of America’s National Public Radio; she worked with Akbar at the Asian Age newspaper in Delhi in 1994

Even as editor-turned-politician MJ Akbar remains defiant against the barrage of allegations of sexual harassment and assault from his former women colleagues, grisly stories of his alleged transgressions continue to tumble out with alarming regularity, each more heart wrenching than the other.

The latest round of accusations has come from Pallavi Gogoi, presently chief business editor at America’s National Public Radio, who worked at the Asian Age newspaper in New Delhi in the mid-1990s when Akbar was its editor.

In a damning first-person account, published by The Washington Post, Gogoi has joined over 30 other women journalists who worked with Akbar at various Indian publications over the past three decades, in alleging that the former high-flying editor was not just a serial harasser but had gone to the extent of raping her while she worked at the Asian Age. Akbar, who is currently embroiled in a legal battle with journalist Priya Ramani, who he has accused of criminal defamation, has dismissed Gogoi’s allegations as “false”. Ramani too has alleged that Akbar sexually harassed her when she worked with him at the Asian Age.

The M.J. Akbar I knew — editor in chief of the Asian Age newspaper — was a brilliant journalist. He also used his position to prey on me. What I am about to share are the most painful memories of my life. I have shelved them away for 23 years.

Two Sundays ago, at my home in the United States, I came upon a story that several journalists had gone public about sexual harassment by Akbar from years ago. Akbar was most recently India’s junior foreign minister, a high-ranking government official who set foreign policy for the world’s largest democracy. He’s still today a member of the Indian Parliament and a member of the ruling party, which prides itself on advancing rights for young girls.

My head started spinning. I called two of my closest friends in India. Both of them, dear friends who love me fiercely, know from what I shared with them more than two decades ago the pain and devastation that were wrought on me by Akbar. Around the same time, I also shared my story with my husband. It had been just a few weeks after meeting him, and I remember breaking down in sobs as I narrated it to him.

I was 22 years old when I went to work at the Asian Age, where the vast majority of us were women. Most of us who joined the outlet were barely out of college. We hadn’t even learned the most basic tools of journalism. Working in New Delhi under Akbar, we were star-struck. He was famous, an author of two well-regarded political books and a leading editor. In the span of about a decade, he helped launch two hugely successful publications in India: Sunday magazine and the Telegraph daily newspaper. The Asian Age, an international paper, was then his latest venture.

Akbar, who was in his 40s, always made sure we were aware of his superior journalistic skills. He marked our copy with his red-ink-filled Mont Blanc pen, crumpled our printouts and often threw them in the garbage bin, as we shuddered. There was never a day when he didn’t shout at one of us at the top of his voice. We rarely measured up to his standards…

At 23, I became the editor of the op-ed page at the Asian Age. I would place calls to top columnists, giants of Indian politics and intellectual society, such as Jaswant Singh, Arun Shourie and Nalini Singh. It was a big responsibility at a young age.

But I would soon pay a very big price for doing a job I loved. My friend Tushita can still recall the moments after the first time Akbar assaulted me. It must have been late spring or summer of 1994, and I had gone into his office — his door was often closed. I went to show him the op-ed page I had created with what I thought were clever headlines. He applauded my effort and suddenly lunged to kiss me. I reeled. I emerged from the office, red-faced, confused, ashamed, destroyed. Tushita still remembers how my face looked that day. When she asked me what happened, I confided in her immediately. She was the only one I shared this with at that time.

The second incident was a few months later, when I was summoned to Bombay to help launch a magazine. He called me to his room at the fancy Taj hotel, again to see the layouts. When he again came close to me to kiss me, I fought him and pushed him away. He scratched my face as I ran away, tears streaming down. That evening, I explained the scratches to a friend by telling her I had slipped and fallen at the hotel.

When I got back to Delhi, Akbar was livid, and he threatened to kick me out of the job if I resisted him again. But I didn’t quit the paper.

I used to arrive to work at 8 a.m., before most newspaper journalists. My aim was to get the op-ed pages ready by 11 a.m., when the rest of the staff came in. That way I could go out reporting as often as I could to escape the office. Soon after the Bombay incident, one story took me to a remote village a few hundred miles from Delhi to cover the appalling saga of a young couple who were hanged by members of the village because the lovers were from different castes. The assignment was to end in Jaipur. When I checked back, Akbar said I could come discuss the story in his hotel in Jaipur, far from Delhi.

In his hotel room, even though I fought him, he was physically more powerful. He ripped off my clothes and raped me. Instead of reporting him to the police, I was filled with shame. I didn’t tell anyone about this then. Would anyone have believed me? I blamed myself. Why did I go to the hotel room?

What was worse was that after that first time, his grip over me got tighter. I stopped fighting his advances because I felt so helpless. He continued to coerce me. For a few months, he continued to defile me sexually, verbally, emotionally. He would burst into loud rages in the newsroom if he saw me talking to male colleagues my own age. It was frightening…

I continued to look for reporting assignments that would take me far away. I remember with such pride covering the December 1994 elections. I crisscrossed the state of Karnataka, far away from Delhi. I interviewed big-name state politicians, attended rallies, talked to villagers. The experience was my first time seeing the fruits of shoe-leather political reporting, because I was the one reporter who correctly predicted the outcome of the elections that year. After that, Akbar said he would send me overseas to either the United States or the United Kingdom as a reward. I got work visas for both countries. I was thrilled. And I thought that finally, the abuse would stop because I would be far away from the Delhi office. Except the truth was that he was sending me away so I could have no defenses and he could prey on me whenever he visited the city where I would be posted.

I recall the time he worked himself into a rage in the London office because he had seen me talk in a friendly manner to a male colleague. After my colleagues left work that evening, he hit me and went on a rampage, throwing things from the desk at me — a pair of scissors, a paperweight, whatever he could get his hands on. I ran away from the office and hid in Hyde Park for an hour. I remember telling my friend Tushita the next day. I spoke to my mom and my sister then, but couldn’t bear to share details. It was apparent to them how distraught I was, and they wanted me to come back.

I had a visa to be a foreign correspondent to the United States. There were at least a couple of senior editors at the same publication that I could work with, I thought. But Akbar was obviously still in charge and summoned me back to Bombay immediately.

I left. This time for good…

There’s nothing for me to gain from speaking out now. In fact, it is heart-wrenching because people I am close to will feel my pain. Akbar has threatened to sue other women who come forward. And maybe there are implications that I haven’t thought of.