The petition filed by the family of Navreet Singh has sought a thorough and independent court-monitored probe into the alleged incident. 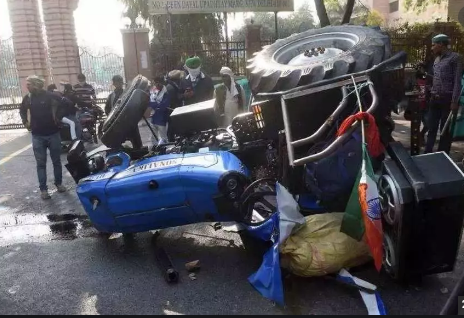 The Delhi High Court on Thursday asked the Delhi Police to file a detailed status report while hearing a plea filed by the family of Navreet Singh, the farmer who allegedly died when a tractor overturned during the farmers’ tractor parade on January 26.

A single-judge bench headed by Justice Yogesh Khanna issued notice in the plea and listed the matter for further hearing on February 26.

Senior Advocate Vrinda Grover, appearing for the petitioner, submitted before the Court that she is appearing on behalf of a 65-year-old grandfather of the deceased who died during the farmers rally on Republic Day. He had suffered ante-mortem injuries, eyewitness says police shot him after which he lost control over the tractor and the same overturned, she said, referring to a newspaper report.

She said the Delhi Police wants to put this off as a motor accident of the farmer ramming his tractor into the barricades and dying as a result. Even if it was a road accident, no inquest has happened, no FIR was registered, Grover submitted.

She stated that there was CCTV footage but police stormed the place where DVR was, and took the footage into their custody.

At this point of time, Justice Khanna asked, “Is there no post mortem in the case?”

She replied, “I’m glad My Lordship asked this question.” She read the post-mortem report, and submitted, “In my opinion, the death was caused by ante-mortem head injury.” But it has not said what caused the injury. The first injury was a lacerated wound of around 2 cm, the margins were inverted. The second injury was identical to the first injury.

“An expert has said that nothing except a bullet hit his body. The Police cannot abandon the Code of Criminal Procedure at will, and make unverified and unsubstantiated claims. With every passing day, their actions are becoming even more suspicious.”

Delhi Government senior standing counsel Rahul Mehra appearing for the Delhi Police submitted that the CCTV footage near Andhra Education Society has been seized. As per his instructions, there is no detailed status report as of now. “I would require some more time for that,” he submitted.

The petition filed by the family of Navreet Singh has sought a thorough and independent court-monitored probe into the alleged incident.

“Various medical/forensic experts who have reviewed the description of  injuries in the post-mortem report have independently made statements, reported by various media houses, opining that the injuries are consistent with firearm /gunshot wounds, and that the said injuries could not have resulted from the tractor overturning, as has been repeatedly asserted and announced by the Delhi Police including senior officers viz, the Commissioner of Police and Deputy Commissioner of Police,”

The plea moved by the grandfather of the deceased has stated that he learnt of the eyewitness accounts and various news reports, which carry expert medical and forensic opinion. The petitioner has sufficient reason to mistrust and not accept the hasty, unverified and self-serving conclusion of the Delhi Police, which has publicly, and without any investigation, stated that the death of his grandson was a motor vehicle accident.