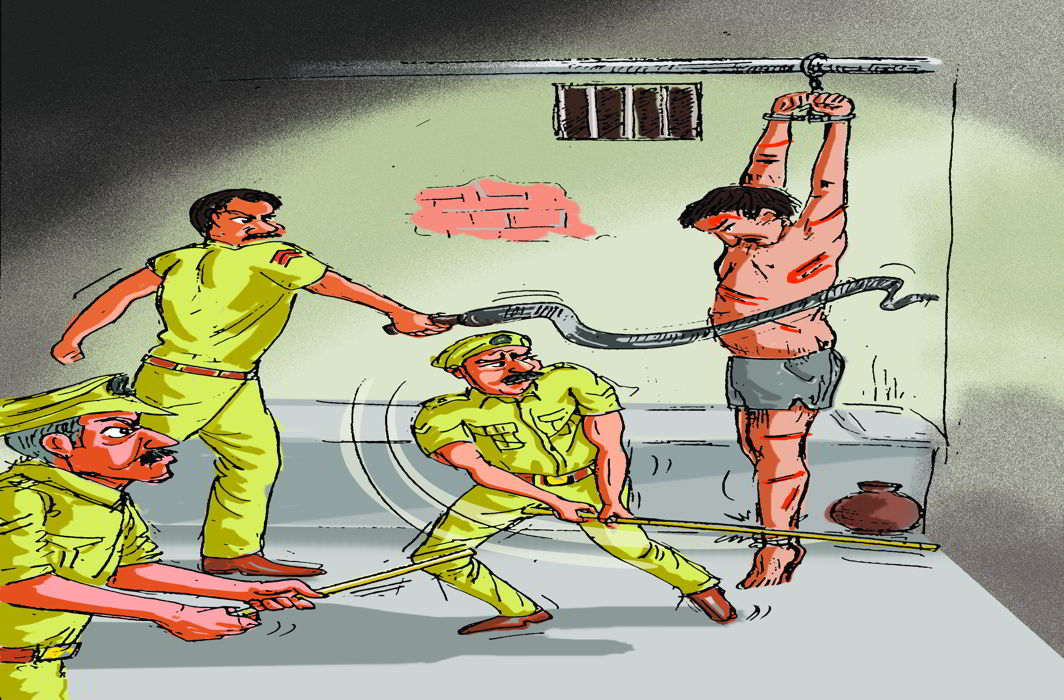 On 25 May 2020, a 46-year-old black man named George Floyd was murdered in Minneapolis, Minnesota, United States, while being arrested on suspicion of using a counterfeit $20 bill. On 20th April 2021, The District Court of Minnesota carried out the verdict on the death of George Floyd where officer Derek Chauvin was tried and convicted of the murder of George Floyd during an arrest on May 25, 2020.

As the court did its duty, the people of the United States of America breathe a sigh of relief and hoped for a society free of racism and police brutality. While the United States of America and the world has raised a lot of concerns about police brutality, India has had little to debate about it. Recently, in April 2021, two policemen ruthlessly beat up a rickshawpuller in broad daylight on a busy street in Indore’s Pardeshipura police station area. The two policemen pinned the man down and showered kicks and blows on him while several bystanders watched the impunity of the police.

While this incident may sound horrific, an incident even more horrific happened on 19nd June 2020, when two men named Jairaj and his son Benicks were picked up for inquiry by the Tamil Nadu Police in Sathankulam, Thoothukudi district for allegedly violating Covid-19 lockdown rules. A few days later, reports emerged that Jairaj and his son Benicks died in custody in Tamil Nadu’s Thoothukudi. Reports have emerged on how the two were tortured and sexually assaulted in police custody at the Sathankulam Police Station.

The custodial death of the two men in Tamil Nadu’s Sathankulam town in Thoothukudi district sparked massive outrage in the state over police brutality and has raised two major concerns: 1) Police Brutality and 2) Police Accountability.

Police Brutality as a phenomenon is not new to India. According to National Campaign Against Torture report, The National Human Rights Commission of India recorded 1680 cases of custodial deaths in the year 2020. Out of these, 1569 deaths took place in judicial custody and 111 deaths took place in police custody.

Annual Report on Torture 2020 released by the National Campaign Against Torture (NCAT) reported that despite the virtual shutdown of the country including complete lockdown from 24 March to 31 July 2020, India witnessed an increase in custodial deaths during the year and over one suicide every week because of alleged torture in police custody. Around 74.4% of the deaths in police custody took place due to alleged torture, and other forms of police brutality have also garnered public attention.

During the lockdown announcement, due to the coronavirus pandemic, the report pointed out how the police beat migrant laborer’s who were on their way home. Before this, when the riots took place in North-East Delhi in February 2020, a video emerged where the police on duty could be seen forcing 5 Muslim men, who lay injured, to sing the national anthem. One of the boys, Faizan also died following the incident.

Although the Supreme Court, in light of such recurring incidents, has attempted to put checks and balances mechanism in place through the historic judgment titled as Prakash Singh Vs. Union of India in 2006 by coming up with 7 directives for setting up the State Security Commission to lay down broad policies and give directions to prevent the abuse of power by police and as a part of these directives, the court directed the setting up of 3 institutions:

1- State Security Commission (SSC) which would lay down the broad policies and give directions for the performance of the preventive tasks and service-oriented functions of the police.

2- Police Establishment Board comprising the Director General of police and 4 other senior officers of the department which shall decide transfers, postings, promotions, and other service-related matters of departmental officers and men.

3- Police Complaints Authority at the district and state levels with the view to inquiring into allegations of serious misconduct by the police personnel.

The thing to be observed is, according to a study by the Commonwealth Human Rights Initiative in 2018 reported that only 18 states have passed the new police act since 2006. The directives issued by the Supreme Court were also applied in a haphazard manner which states falling short of one guideline or the other.

For instance, 27 out of 29 States constituted the State Security Commission, and only 8 states were found to have fulfilled the requirements to prepare the annual report of the State Security Commission and table it before the legislator. To sum it up, no state fully applied the guidelines they were supposed to. Hence while we have methods of ensuring police accountability, they have not been enough.

Currently policing is a state subject in India. This means different states have different guidelines for their respective police forces. However, most of the guidelines adopted by the states have been modeled after The Police Act of 1861. The Police Act of 1861 was legislated by the British after the revolt of 1857 often referred to as the first war of independence. It was the first organized rebellion against the rule of the British and the East India Company. The Police force came into being as a means of crushing dissent and not as a democratic move. The practice has continued even after India became independent.

Although there is that sort of judicial involvement that one can rely on but within the system, it seems like there are no systems of accountability and checks and although one can invoke judicial powers in this regard but that are also very sporadic. There isn’t a history of judicial intervention to address questions of police brutality and there have been several committees that have spoken about police accesses, but the recommendations of these committees remain unimplemented to this day. The need, therefore, is to transform the role of the police in relation to the citizen.

To promote accountability, state and central legislatures should pass legislation that calls for the following:

1- Establishment of an independent special investigator or prosecutor office responsible for investigating instances where police have seriously injured or killed civilians.

3- Providing a negligent hiring cause of action against police departments that should have known that an officer would be likely to engage in unconstitutional conduct.

6- In addition, law enforcement agencies, including local and state police departments should incorporate these guidelines into their internal guidelines, manuals, policies, protocols, performance evaluations, and practices. The legal aid societies should maintain a database of police officers who have repeatedly been accused of misconduct by their clients. This database should include information on the police officer’s name, precinct, and a brief description of the incident.

The purpose of a police force in a free society is to promote public safety and uphold the rule of law so that individual liberty may flourish. Trust and accountability between the police and the communities they are sworn to protect is essential to advancing these goals.

The Author is a 4th Year Law Student.