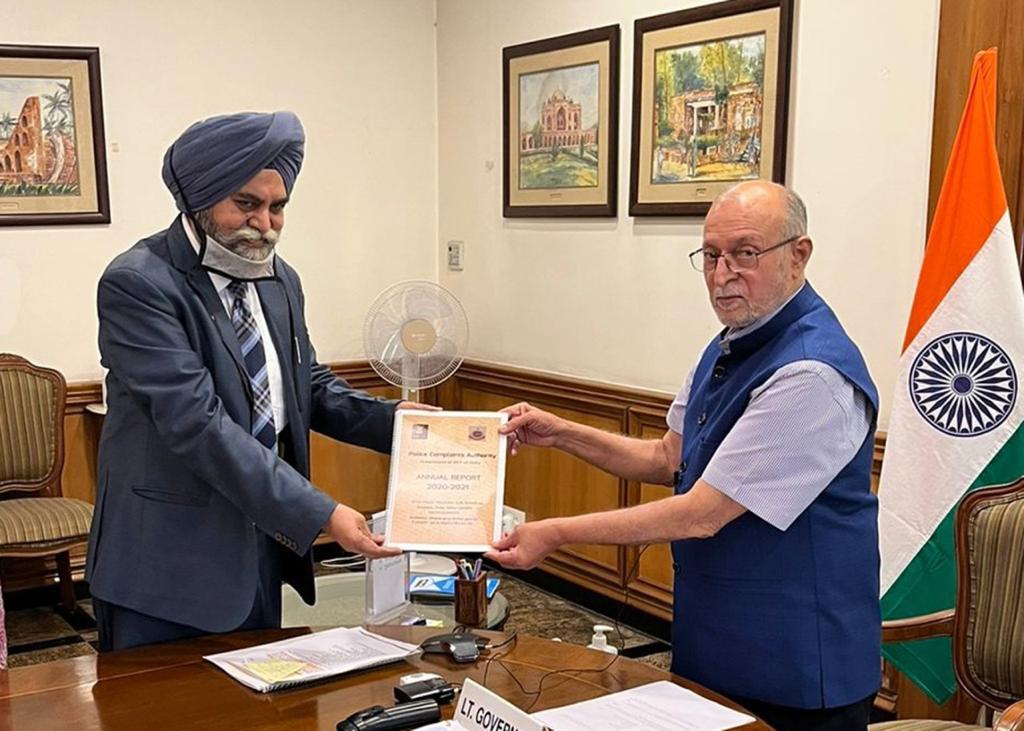 The Police Complaints Authority under the chairmanship of Justice P.S. Teji, former judge, Delhi High Court, has achieved a benchmark of 92.49 percent in disposal of complaints received by it during 2020-2021.

Previously, it had disposed of 5,751 cases out of the total 6,142 complaints. During 2020-2021, the Police Complaint Authority received 2,146 complaints, out of which 1,985 were disposed of expeditiously and efficiently, achieving a 92.49 percent disposal rate, said the Annual Report 2020-2021 of the Police Complaint Authority, which was submitted to Delhi Lieutenant-Governor Anil Baijal.

LG Baijal lauded the achievement of the Police Complaint Authority under the chairmanship of Justice P.S. Teji. In his message, LG said, “Annual Reports not only present an overview of the achievements of the year gone by but also provide valuable insight to formulate the Action Plan for the next year while providing an opportunity to revisit policies and strategies to achieve the desired outcomes.”

“In the present time, the role of the PCA assumes great significance in effectively addressing the grievances and complaints of the common people relating to Delhi Police. I am certain that PCA will continue its endeavour to serve the citizens of Delhi while remaining committed to the twin dictum of responsiveness and redressal”

The Police Complaints Authority had resumed its all public hearings and dealings with effect from March 1, 2021, this year subject to following the guidelines to prevent the spread of the Covid-19 virus. The Authority was not in operation since the outbreak of the Covid-19 pandemic last year.

The Police Complaints Authority has been established to examine grievances and accusations against Delhi Police personnel on matters of custodial death, custodial rape, blackmailing or any serious abuse of power.

The Authority, with Justice PS Teji as its chairman, inquire into allegations of “serious misconduct” against police personnel, either suo motu or on a complaint received from a victim, the National Human Rights Commission or Lieutenant-Governor or Chief Secretary or Principal Secretary (Home), GNCT of Delhi.

Justice P.S. Teji has been a judge par excellence and is known for his legal acumen, especially in criminal jurisprudence. During his tenure at the Delhi High Court, he had an impressive rate of disposal of cases and there are about 300 reported judgements to his credit.

In May 2009, Justice Teji was appointed as District Judge-cum-Special Judge, PC Act (CBI), became District & Sessions Judge (East) and contributed substantially in various projects at Karkardooma Courts Complex including Construction and Distribution of 480 Lawyers Chambers, Construction and Function of 1st Paperless E-Court of India, Model Lock-up, First Child Witness Court of India and First Vulnerable Witness Examination Court till elevation to High Court as an Additional Judge with effect from 15th December, 2014. Retired on 13.08.2018. He was designated as Senior Advocate in September, 2018 by the Supreme Court of India. He became the Member of DIAC, became the Member of Arbitration Centre of Punjab and Haryana High Court, Chandigarh.

He was appointed as the Chairman of the Police Complaints Authority on the recommendation by the Chief Justice, Delhi High Court on 11.12.2018 and he resumed the present office as Chairman on 24.12.2018.