Ashish Rai, a law student from Mumbai University wrote that the way the flag of another community has been waved in place of the national flag of India, hurting the honor and dignity of the country 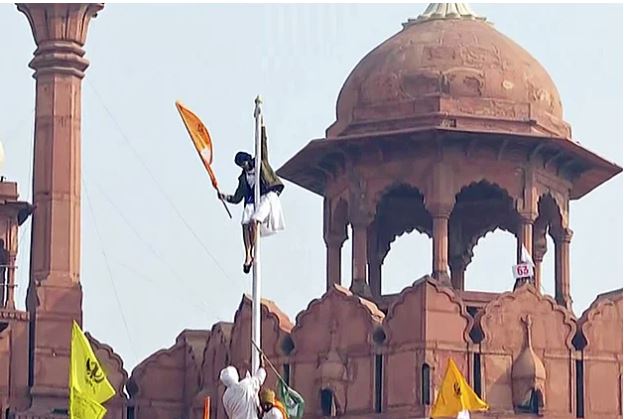 A letter has been sent to Chief Justice of India by a Law Student requesting him to take Suo Motu cognizance against the anti-social elements who have waved the flag of another community in place of National Flag on Red Fort in the name of Farmers Republic Day Tractor Rally organized by farmers on January 26, 2021.

The letter is written by a law student Ashish Rai from Mumbai University stating that the tractor rally was organized by Group of Farmers on the day of January 26, 2021. In that tractor rally event which was going on peace fully, later it has been terrorized by some anti-social elements. In which a large number of Public property of the country has been damaged. And Due to tampering with the country’s heritage Red Fort.

He wrote “on the occasion of Republic Day being celebrated on January 26, above the Red Fort of Delhi, the way the flag of another community has been waved in place of the national flag of India, hurting the honor and dignity of the country. Is a shameful event. And the whole country is also hurt by this incident, because of this incident, the national flag has also been insulted with the constitution of the country. The country’s devotional spirit has been hurt. So these kind of activity damage Constitutional sentiments of Indian citizen.

“It is, therefore, a humble request to the Hon’ble Supreme Court that a Special Investigation Committee be formed on this entire matter to conduct a rigorous inquiry against the anti-social element involved in this unconstitutional activity so as to punish the accused,”

In view of the ongoing protest on the roads of Delhi by some anti social elements, the Ministry of Home Affairs issued an office order for blocking the internet service till midnight in outer residential areas of North West Delhi i.e. Singhu border, Ghazipur border, Tikri border, Mukarba Chowk and Nangloi from 12:00 hrs to 23:59 hrs today January 26, 2021.