The last time Delhi saw such temporary internet service suspension was during the north-east Delhi riots in February last year. 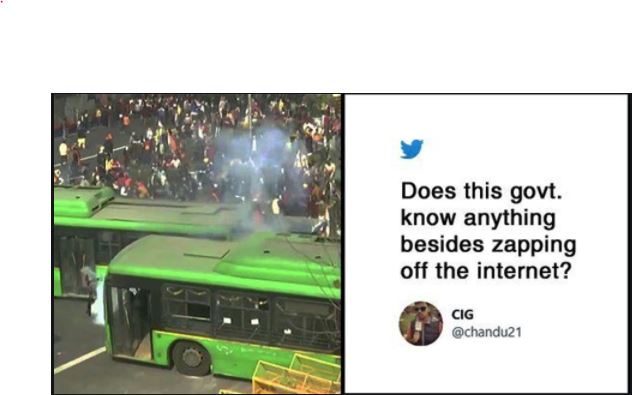 The Ministry of Home Affairs on Tuesday suspended internet in Singhu border, Ghazipur border, Tikri border, Mukarba Chowk and Nangloi from 12:00 hrs to 23:59 hrs amid clashes between the protesting farmers and the Delhi Police during the farmers’ tractor rally on Tuesday leading to one farmers’ death.

The order issued by MHA deputy secretary Shailendra Vikram Singh stated that even the adjoining areas of these five protest hubs will witness temporary suspension of internet services. The order was issued with the approval of the Union home secretary.

In its order, the Ministry of Home Affairs said that the internet services were suspended in Tikri, Singhu, Ghazipur borders, Mukarba Chowk, Nangloi and their adjoining areas till 23:59 hours (11:59 pm) as a precautionary measure in wake of the farmers’ protest.

On the other hand, the Delhi Metro Rail Corporation has already closed several metro stations as thousands of protesting farmers entered north and Central region of Delhi.

The last time Delhi saw such temporary internet service suspension was during the north-east Delhi riots in February last year.

The tractor parade planned on Republic Day as a symbol of farmers’ demand to repeal the three farm laws turned violent.

The farmers’ rally, however, turned violent leading to death of a protester. Later the police appealed the farmers to maintain peace asking them to return to their pre-decided route.

The farmers’ Republic Day tractor rally witnessed chaos between the protesting farmers and police security personnel. The police fired tear-gas shells and lathis to disperse the protestors. The protesters were remained adamant to move towards the Red Fort. Later, Rapid Action Force was also deployed at the ITO intersection.

Delhi Police Commissioner S.N. Shrivastava asked to the protesting farmer not to indulge in violence, maintain peace and return through the designated routes.

After the clashes, the Samyukta Kisan Morcha has come out and condemned the undesirable and unacceptable events that took place on Tuesday and thanked the farmers for the unprecedented participation in their tractor march.