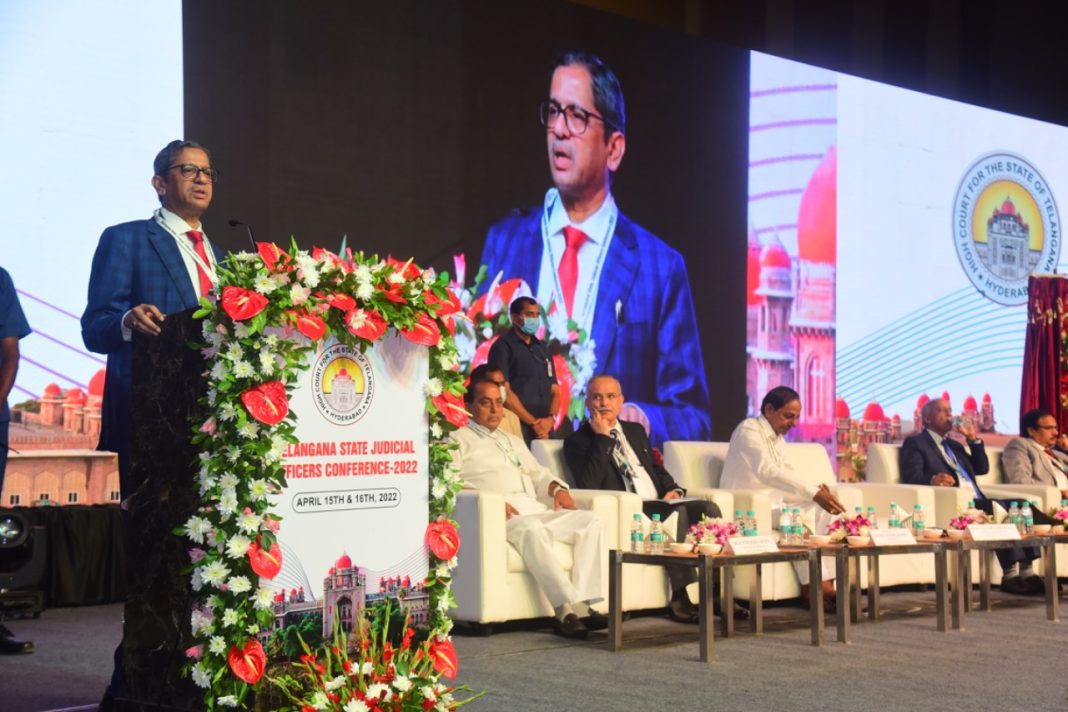 In the inaugural session, Telangana CM K. Chandrasekhar Rao said, “I feel the city Courts are overloaded with work, I request you humbly sirs that Judges posted there are increased & Magistrate courts are also increased down the line so burden on courts is reduced.”

Speaking on the occasion of the inaugural session of the Telangana State Judicial Officers Conference 2022, Chief Justice of India N.V. Ramana said that the purpose behind organizing this Conference is to introspect about various factors governing the administration of justice and to discover ways and means to bring qualitative improvement in the system. Strengthening the subordinate Judiciary is the need of the hour.  I would like to share with you some of my thoughts in this regard.

CJI told the judicial officers of districts to “create congenial atmosphere” for litigants and “remember human aspect” while adjudicating cases.

Coming back to today’s event, the greatest strength of the Indian judiciary is the faith of people in the institution. Being the Court of First Instance, it is your responsibility to ensure that the litigants remain satisfied. Litigants form an opinion on the judiciary based on the conduct of Officers / Courts in the Subordinate Judiciary. This casts a great responsibility on your shoulders.

The CJI also emphasized that we should try to empathise with members of minorities and weaker sections of society and “Treat everyone with respect.”

The Chief Justice said the judiciary “was a check on excesses of the executive”, and the judicial officers need to keep themselves updated with the changes in law and keep abreast of developments in other sectors like science and technology.

In case of Telangana, we could go a step ahead. The strength of High Court has gone up from 24 to 42. The working strength has gone up from 12 to 29. After I assumed office, so far 17 fresh appointments were made. You all know, out of those 17, 11 are from your fraternity.

Talking on the financial aspects, he said that “financial soundness was crucial for the judicial officers to give their best.” He added that he has spoken to the Pay Commission recently and that “good news” was round the corner.

CJI Ramana did not forget to thank Chief Minister K. Chandrasekhar Rao for the latter’s quick response in extending all facilities to the judicial officers.

Telangana High Court Chief Justice Satish Chandra Sharma said that a there is a rising trend of indiscipline which has crept in among judicial officers. He added “Senior counsels are being ill treated, and many officers are not punctual that not only delays the work but also gives a bad name to the system,” CJ Sharma said in his inaugural address.

CJ Satish Chandra Sharma drew everyone’s attention to the 8 lakh pending cases in district courts. He said “better and modern judicial infrastructure” was the need of the hour for speedy disposal of cases.

Everyone agreed that the judicial officers were required to play a pro-active role in clearing pending cases.