India’s call for regional cooperation on the virus was welcomed by all except Pakistan which has still not announced its contribution. By Seema Guha 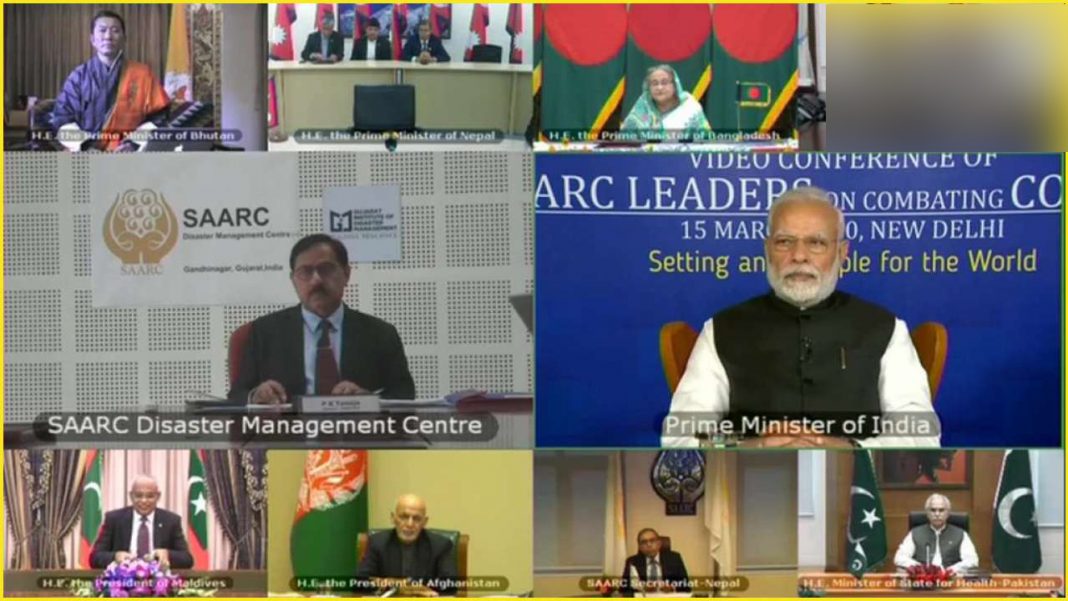 When Prime Minister Narendra Modi decided to give a push to the South Asian Association for Regional Cooperation (SAARC)—the regional outfit which India had effectively made irrelevant since 2014 to isolate Pakistan—there was speculation that perhaps it was softening its stand. This was an overture as Islamabad was also included in the invitation.

But it was quickly apparent that India was not reaching out to Pakistan. Nor was Islamabad in any mood to oblige. Pakistan is today in a much better position internationally, thanks mainly to US President Donald Trump’s hopes of getting US troops out of Afghanistan before the November US presidential elections. Pakistan is a player in this game and is no longer treated like a pariah by the international community. Trump insists he is good friends with Pakistan Prime Minister Imran Khan. Pakistan showed its lack of interest at the Indian move by sending a junior minister to represent it at the video conference initiated by India. Commentary in the Pakistan press about India’s initiative was also lukewarm.

On March 15, Modi held a video conference with SAARC leaders to jointly fight the coronavirus pandemic. With the combined population of SAARC nations representing nearly one-fourth of the world’s population, India got the opportunity to seize the moment. It once again tried to gain the high moral ground. It was New Delhi’s way of pulling its weight in the region and sending out the message that it was willing to play the leadership role in keeping with its big power status. WHO praised India’s initiative, as did Trump and Russian President Vladimir Putin. Modi has suggested a similar video conference for G20 leaders.

Apart from Modi, the conference was addressed by Bangladesh Prime Minister Sheikh Hasina, her Bhutanese counterpart, Dr Lotay Tshering, Nepal’s KP Sharma Oli, Maldives President Ibrahim Mohamed Solih, Sri Lanka’s President Gotabaya Rajapaksa and Pakistan’s aide to the PM on health, Dr Zafar Mirza. The refusal by Imran Khan to attend an event dealing with a threat to public health has sent a wrong signal and shown him as churlish and irresponsible.

India’s image had got a battering in recent times. The February 2020 communal riots in Delhi where 54 people, mainly Muslims, were killed, combined with the internet lockdown in Kashmir after the scrapping of its special status, the National Register of Citizens as well as the Citizenship Amendment Act had changed the narrative for India. Trump and his family’s highly successful visit to Ahmedabad and Delhi got buried in the mayhem. The coronavirus onslaught gave India the perfect opportunity to change the narrative.

At the video conference, Modi suggested a SAARC Corona Emergency Fund which member states could draw from to fight the deadly disease. India announced an initial contribution of $10 million; Maldives $2 lakh; Nepal and Bhutan nearly $1 million and $1 lakh, respectively; Colombo $5 million, Bangladesh $1.5 million and Afghanistan $1 million. The Fund now has a total of $18.3 million. The multiplication of cases in SAARC countries reinforced the need for the group to act together. Pakistan is the only country that has so far not put any money on the table, possibly because it is an Indian suggestion.

During his address, Modi said that India was getting together a rapid response team of doctors and specialists, along with testing kits and other equipment. “They will be on standby, to be placed at your disposal, if required,” he said. “We can also quickly arrange online training capsules for your emergency response teams. This will be based on the model we have used in our own country, to raise the capacity of all our emergency staff.”

Considering that India, a nation of 1.3 billion people, also has a health emergency in place and Modi has announced a virtual lockdown for 21 days, will Delhi have the capacity to help others when its own resources are badly stretched?

Like in everything between India and Pakistan, the video conference was also mired in controversy. Pakistan’s health minister could not help but drag in Kashmir. Mirza spoke of the need to end the blockade in the Valley to fight COVID-19. While India bristles at the mention of Kashmir, the Pakistan government has to play to its domestic constituency and cannot help but mention the situation in the Valley. “Opening up communication and movement would facilitate dissemination of information, allow distribution of medical supplies and allow containment and relief efforts to proceed unimpeded,” the minister said.

But despite the sound and fury raised by Imran Khan on Kashmir, the world has not responded to Pakistan in the way it would have liked. In fact, the opposition in Pakistan is calling out Khan for not being able to further internationalise the plight of Kashmiris. So mention of Kashmir and the suffering of the people there since the abrogation of Article 370 should have been expected.

Nevertheless, Raveesh Kumar, India’s external affairs spokesman, had this to say about Pakistan after the video conference: “A crisis of this magnitude does not recognise borders. In this spirit, the prime minister had called the SAARC video conference on coronavirus. The platform was not political, but humanitarian. They misused it.”

Naturally, Pakistan’s Foreign Office reacted instantly. First, it accused India of twisting the minister’s statement at the video conference. “The people of South Asia are well aware as to which country has been seeking to ‘politicise’ the SAARC process and continues to obstruct its onward march,” it said. The statement underscored that Pakistan believed the collective endeavours of South Asian nations to fight common challenges should not be allowed to become a victim of self-serving propaganda. Pakistan, it said, had reaffirmed its readiness to host a SAARC health ministers’ video conference. Its foreign minister, Shah Mahmood Qureshi, was on the phone with his Bangladesh counterpart and informed him that Pakistan was keen to organise it. Pakistan has also been advocating getting China on board as the Chinese are best placed to advise member states considering they have the experience and means to fight COVID-19. India certainly would not be amused by this call.

Modi was way ahead of other regional leaders in proposing a joint strategy for SAARC nations to help each other in fighting the pandemic. Pakistan is now hoping to catch up. But it is a repeat of the same old story for other member states. SAARC continues to remain a moribund grouping mainly because it is held hostage to the India-Pakistan rivalry. The rest of the members continue to remain silent spectators and suffer the consequences.