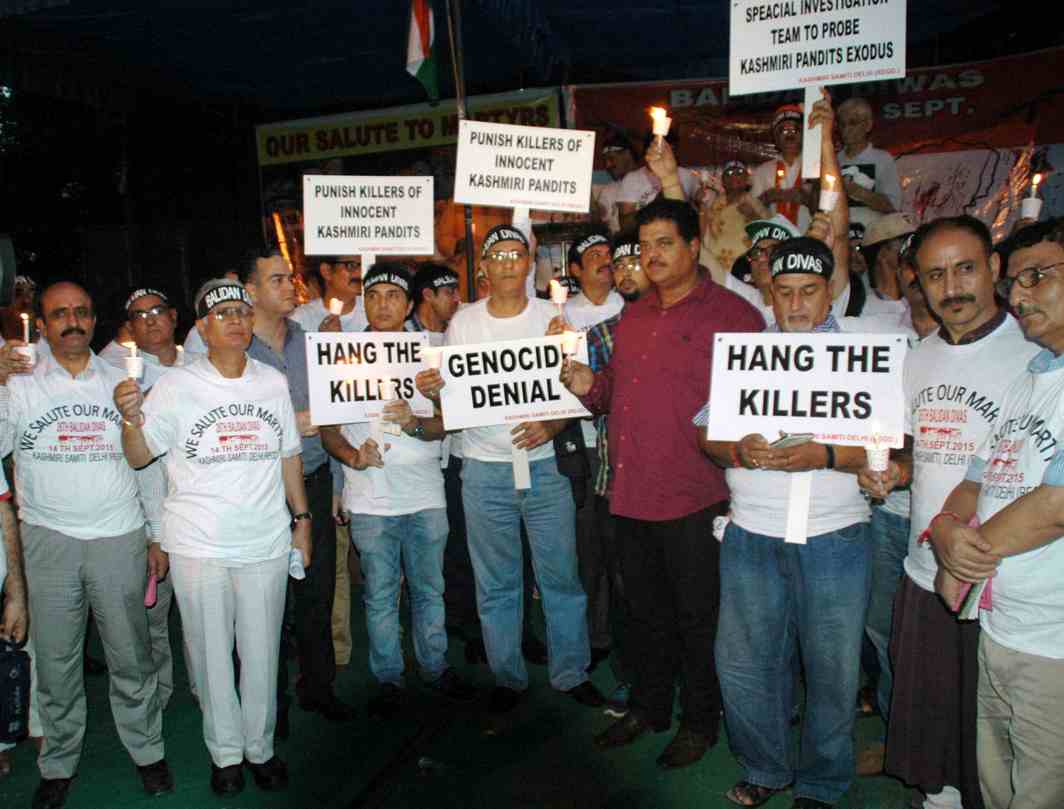 Above: Kashmiri Pandits participating at a candle march to mark the Kashmiri Hindu Martyrs Day and demanding separate state for them, in New Delhi (file picture).Photo: UNI

Apex court angered at the delay and reasons shown for it, gives state a 3-month deadline

The Supreme Court bench of Chief Justice JS Khehar and Justices DY Chandrachud and AK Goel on Tuesday (August 8) expressed its dissatisfaction on the non-formation of a minority cell for the state of Jammu & Kashmir and asked the Centre to come to a decision on this in three months time.

The bench was also slighted by the response of the state regarding the issue in an affidavit which enumerated several other preoccupations as a reason for not filing its reply. The Chief Justice, in a terse message, said: “The Jammu and Kashmir affidavit makes fun of us. It’s a disastrous affidavit. Anyway we are giving a last opportunity.”

The state government’s affidavit said its official’s did not get time to coordinate with officials of the Centre, because they were “busy conducting the Amaranth yatra and with taking care of law and order duties in a worsened situation”.

Additional Solicitor General Tushar Mehta informed the court that consultations regarding setting up of the commission were at an advanced stage. This was a bit strange, because on May 1 the Centre had informed the apex court that a high level committee comprising of senior officials of the state and central government had been constituted to decide on the formation of a minority commission for the state.

The committee, the Centre had informed, was headed by the Union Secretary for Minority Affairs, Chief Secretary, J&K and other members. The Centre had also informed the court that one meeting had already been convened.

The mandate of the committee is to submit a joint proposal before Supreme Court suggesting as to how problems faced by Hindus, Sikhs, Buddhists, Christians of J&K, owing to their non-identification as  minorities shall be resolved.

Chief Justice Khehar had told Tushar Mehta that it was a “very very important issue”, given the manner in which things have emerged. He had said: “Deal with the contentious issue jointly.”