154,225FansLike
654,155FollowersFollow
0SubscribersSubscribe
Home Top News of the Day news SC bench to decide whether a Parliamentary committee report is a document to be referred to in a case 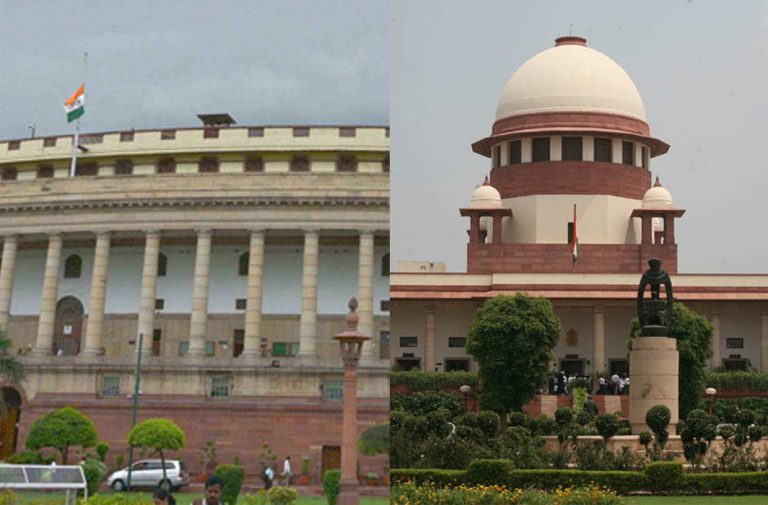 A critical issue of whether the Supreme Court can consider as a reference point a report prepared by a Parliamentary standing committee on a particular issue has been referred to a constitution bench by a two judge bench comprising Chief Justice Dipak Misra and Justice Rohingtan Nariman.

The constitution bench formed for this purpose – comprising Chief Justice Dipak Misra and Justices A K Sikri, A M Khanwilkar, D Y Chandrachud and Ashok Bhushan – has been asked to answer two questions.

The issue emanated from the original hearing, by the two-judge bench, of a matter relating to the action taken by the Drugs Controller General of India and the Indian Council of Medical Research pertaining to the approval of a vaccine (Human Papilloma Virus (HPV) manufactured by Glaxo SmithKline and MSD Pharmaceuticals Private Limited.

This medicine is for preventing cervical cancer in women and the experiments of the vaccine done with the charity provided by Path International as an immunization by the Government of Gujarat and Andhra Pradesh. The case arose with the untimely death of certain persons.

In the course of proceedings, attention of the court was drawn to the 81st Report of December 22, 2014 of the Parliamentary Standing Committee.

At that time an issue was raised from the bar as to whether the court, while exercising the power of judicial review or its expansive jurisdiction under Article 32 dealing with the public interest litigation, can refer to the report of the Parliamentary Standing Committee and issue direction on the basis of that.

Senior Advocate Harish Salve, appearing for one of the pharmaceutical companies, had read a few parliamentary reports. He submitted that these reports cannot be relied upon. These reports contain very strong views of people.

On Wednesday (October 25) Salve said: “Framers of the constitution had framed it in such a way that the judiciary and the legislative can work independently. No one will interfere with each other. The legislature will not interfere with judiciary unless in the case of impeachments.”

Justice Chandrachud observed: “There are two things in this – one is, what is said in Parliament by the parliamentarian. The second is the product of that debate. As far as first one is concerned, that may be beyond judicial scrutiny, but in the second case the final product out of that debate is under judicial scrutiny. Reports are part of a legislative product. Then why can’t these reports be scrutinised by the court?”