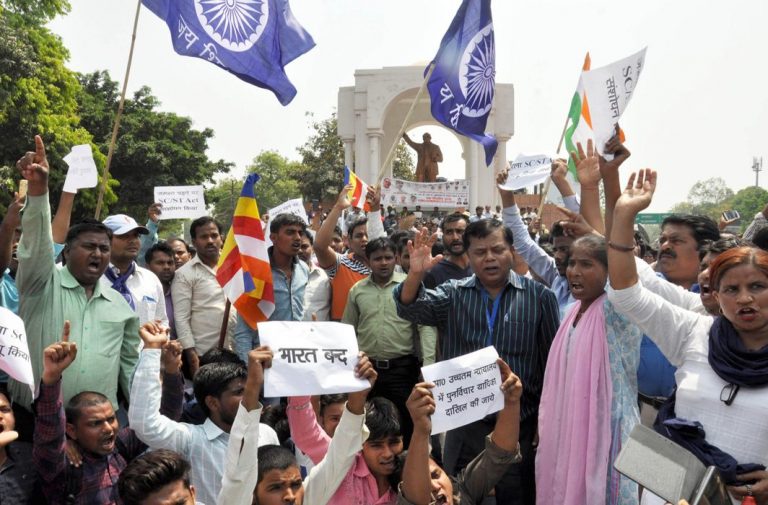 Above: Members of Dalit organisations raising slogans during  Bharat Bandh over SC/ST issue, in Lucknow on Monday/Photo: UNI

Apex court rejected the centre’s request for urgent hearing of a review petition even as violent protests spread across India, claimed six lives

Embattled by protests from leaders of all political hues, including those within the saffron fold, as well as various Dalit organizations, the Centre, on Monday (April 2), moved a petition in the Supreme Court seeking review of its March 20 verdict which diluted the Scheduled Castes and Scheduled Tribes (Prevention of Atrocities) Act.

However, the bench headed by Chief Justice Dipak Misra is learnt to have declined the Centre’s request for an urgent hearing of the review petition and has directed that the same may be listed as per usual procedure.

The Chief Justice’s decision to not grant an urgent hearing to the petition, moved by the Centre’s Ministry of Social Justice, coincided with widespread violent protests across many Indian states by Dalit and Adivasi organizations over the perceived dilution of the SC/ST Act.

The top court’s move could be seen as the second major setback for the Centre on the prevailing row SC/ST Act. Social commentators, Dalit and Adivasi activists and political leaders, including several Dalit MPs of the BJP had earlier slammed the Centre for “mishandling” the case in the apex court which finally led to the bench of Justices AK Goel and UU Lalit declaring, on March 20, that automatic arrests and registration of criminal cases under the SC/ST Act will no longer be permitted.

The two-judge bench of Justices Goel and Lalit had ruled that public servants could not be prosecuted without the approval of the appointing authority, and private citizens too should be arrested only after an inquiry under the law. The bench had also diluted a stringent clause of the Act by ruling that a preliminary inquiry in a case filed under various sections of the said law would be conducted by a deputy superintendent of police rank official to ensure the allegations are not frivolous so that “false implication” of an innocent individual may be avoided. The court had also introduced a provision for anticipatory bail in the Act.

The court’s verdict was based on the premise that stringent provisions of the SC/ST Act – including those related to immediate arrest of an accused while an enquiry is still pending, offences under the law being non-bailable, etc. – were being blatantly misused to frame and harass “innocent” individuals, often out of a sense personal or political vendetta.

However, the top court’s decision and the Centre’s failure in ensuring that the Act was not diluted, has predictably unleashed chaos, both politically and socially.

On Monday, as the ‘Bharat Bandh’ call given by several Dalit and Adivasi organizations derailed normal life across the country – states like Madhya Pradesh, Rajasthan, Bihar, Punjab, Gujarat, Uttar Pradesh and Jharkhand – and turned into a violent protest, the Centre gave desperate assurances of finding a judicial remedy. Union law minister Ravi Shankar Prasad said: “I wish to convey that we’ve filed a petition on the judgement by Supreme Court on the SC/ST act. We have filed a comprehensive review petition which will be presented before the court by the senior lawyers of the government.”

However, the Centre was embarrassed once again in the top court as the Chief Justice refused to take up the review petition for urgent hearing. Curiously, the Chief Justice’s move came as protests grew more violent, claiming one life in Madhya Pradesh’s Morena district.

As the agitation grew, reports poured in of more deaths from the central Indian state (five people had been reported dead from across MP by 6pm on Monday, one from Rajasthan) and also of the loss to property that the protests had caused.

Union home minister Rajnath Singh and some of his colleagues in Prime Minister Narendra Modi’s government and the BJP sought to claim that the violence and destruction caused by the protests were being incited by vested political interests, indicating unambiguously that the agitation was being backed by Opposition parties.

“I appeal to all political parties & groups to maintain peace and not incite violence,” Rajnath Singh said.

Local administration officials across several districts of various affected states were forced to impose curfew. In Madhya Pradesh, where the violence was seemingly most intense despite prohibitory orders, five persons were killed and several injured during indiscriminate firing by a group of people following violent protests that erupted in the Gwalior, Bhind, Morena, Sagar, Balaghat and Satna districts. Another person was killed in police firing in Alwar district of Rajasthan.

Section 144 was also imposed in the Barmer, Hindaun and Karauli districts of Rajasthan while protestors blocked key roads and even national highways in Patiala and Ludhiana (Punjab), Ahmedabad and Botad (Gujarat), Ranchi (Jharkhand), Jaipur (Rajasthan), Forbesganj and Arrah (Bihar), Yamunanagar (Haryana) and a host of other cities and towns across various states.

While insisting that her party was not behind the ongoing violence that has rocked parts of Uttar Pradesh and Madhya Pradesh’s Morena and Bhind districts (where the BSP has significant political clout), BSP supremo and Dalit leader Mayawati said: “I support the protest against the SC/ST Act. I have got to know that some people spread violence during the protests, I strongly condemn it.”

Congress president Rahul Gandhi too has extended his support to the Bharat Bandh call by Dalit organizations. “Thousands of my Dalit brothers and sisters have come out on the streets to demand protection of their rights from the (Narendra) Modi government. We (Congress and I) salute them,: Rahul Gandhi tweeted. He also blamed the BJP and the RSS for the Supreme Court ruling, saying: “Keeping Dalits at the lowest rung of Indian society is in the DNA of the RSS/BJP. Whoever dares challenge this position is suppressed with violence.”