In the December issue, the former Chief Justice of India, S.A. Bobde, inaugurated e-Sewa Kendra at High Court of Tripura on December 23, 2020. 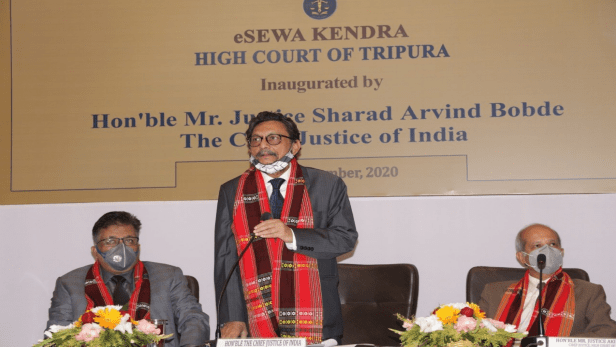 The Supreme Court of India’s e-committee has recently put out its December 2020 issue. The e-Committee is the governing body overseeing the e-Courts Project conceptualized under the “National Policy and Action Plan for Implementation of Information and Communication Technology (ICT) in the Indian Judiciary-2005.” It is under the chairmanship of Justice Dr D.Y. Chandrachud.

The e-Sewa Kendra has been established under the guidance of Justice Chandrachud. The e-Sewa Kendra shall function as the first line of contact between the litigants and judicial establishment to access eCourts Project-related services and legal aid.

On December 7, 2020, the first-ever High Court level workshop for High Court Judges on the usage of the NJDG portal as a court and case management tool was held by the Madhya Pradesh High court through video conferencing. The Chairperson of the e-Committee addressed a letter dated 13 August 2020 to all Chief Justices for getting all the High court judges and members of Computer Committees of High Courts acquainted with the services available on NJDG.

On December 16, 2020, Patna High Court held the workshop on NJDG for all High Court Judges. It commenced with the opening remarks of Chief Justice Sanjay Karol. The various topics of NJDG on Query Builder, Delay Reason, Generation Reports, Pendency data, Judge wise Disposal, Return Report and Establishment Report were covered in the workshop. The queries of the judges were addressed at the end of the session.

Meanwhile, the Odia language version of the e-Committee website went live on the same date. Consequentially, Orissa High Court became the first High Court to go live with a non-Hindi, regional version of the website.