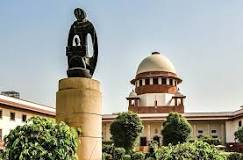 A three-judge bench headed by the Chief Justice S. A. Bobde and Justices BR Gavai and Surya Kant declined to interfere in the matter.

Giving assent to his argument, the Supreme Court directed the Election Commision to impose the Model Code of Conduct four weeks before the notified date of polling.

The Supreme Court also said that the present development activities already undertaken will not be interrupted till the Model Code of Conduct is reimposed, and if the State Government wishes to undertake any fresh developmental activities, they shall do so only with prior permission of the Election Commission.

Advocate Shekhar Naphde, representing the Commission, contended that the Andhra Pradesh is not entitled to move the Court by way of fifling a writ petition under Article 32 of the Constitution of India.

On this note, the bench said that it was not willing to go into this question due to the developing circumstances, leaving the question open for determination in an appropiate case.

The Supreme Court has passed the following directions;
“We direct that since the Election Commission has already taken the decision to postpone the Elections, there shall be a post decisional consultation with the State of Andhra Pradesh before the next date is notified by the Election Commission. The Model Code of Conduct for the elections shall be reimposed four weeks before the date of polling. We further direct that the present development activities which have already been undertaken shall not be interrupted till the Model Code of Conduct is reimposed. However, if the State Government wishes to undertake any fresh developmental activities, they shall do so only with the prior permission of the respondent – Election Commission. In no circumstance, the State Government shall be prevented from taking necessary steps to curb the menace of Corona Virus (COVID 19) epidemic. The instant writ petition is disposed of in the above terms. Pending interlocutory applications, if any, stand disposed of.”