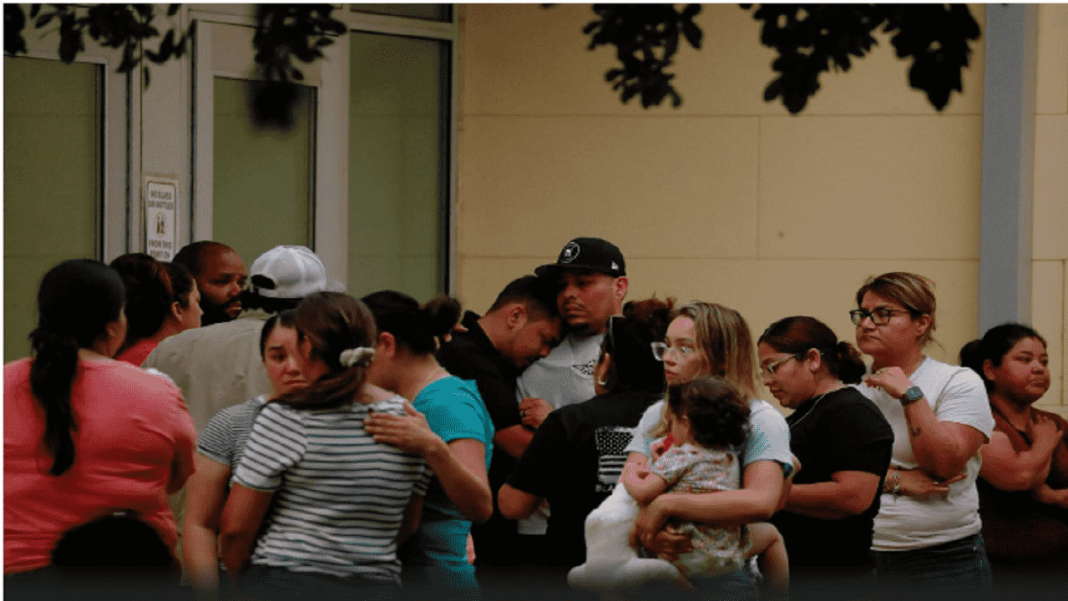 A teenager killed 19 elementary students and two teachers in a murderous rampage through a Texas school on Tuesday as the school was preparing for summer break. This happened in Uvalade, a small town in south-central Texas 61 miles (short of 100 km) from the Mexico border.

The teenager was killed by police.  This is the second mass shooting in 10 days, and comes 10 years after the school shooting in Connecticut at the  Sandy Hook elementary school left 26 children and teachers dead.

Twelve hours after the shooting, many Texas families are still searching for children who were not at the designated reunification point and have yet to be identified at area hospitals.

The Texas Lt. Governor’s reaction, in keeping with right-wing attitudes about gun violence, was to say they needed to have better school security and arm teachers.

Mixing despair and anger, US President Joe Biden shamed Congress on gun control, questioning why the country he now leads has been incapable of coming up with an antidote to the mass shootings that show no signs of abating. He avoided asking for specific regulations.

“Why are we willing to live with this carnage? Why do we keep letting this happen? Where in God’s name is our backbone?” he said, during a seven-minute TV address from the Roosevelt Room at the White House after news of the mass killing.

“It’s time to turn this pain into action,” said Biden who has lost two of his own children, and has delivered more eulogies than most politicians.

This issue with weapons and America’s right to bear arms is derived from the Second Amendment.  The horror of young children murdered in school pushed Tuesday’s election news to a distant second place on websites and programs.

To this day, Donald Trump remains furious at losing the national presidential race, losing in Georgia and seeing its two Republican senators defeated. Those two Georgia seats gave Democrats control of the US Senate. In retaliation, the former president has raged at the Republicans running the state, choosing to back primary challengers who supported the idea of a stolen election.

However, Georgia Republican voters repudiated Trump’s endless attacks on Georgia’s election integrity, making Trump-backed David Perdue a loser with barely 23% of the votes. This is the former president’s biggest electoral setback in the 2022 primary season.

Georgia Secretary of State Brad Raffensperger, who recorded and released his discussion where Trump badgered him to cheat, won renomination. It was decisive but closer than the Governor’s race.

Does this portend some rough times for Trump-backed candidates across the nation in the November elections? Too early to tell, but some of the Trump ‘Make America Great Again’ mystique has been tarnished by his insistence on claiming he was swindled out of office, and by more than a million American deaths from Covid.

The Supreme Court leak of the draft decision in Roe v. Wade indicates the Republican majority will overturn a woman’s right to an abortion. The women’s vote will be crucial nationally in this election Year.

Republican Governor Brian Kemp, who refused to be pushed around by Trump on the election integrity issue, will face off in November with the woman he barely defeated four years ago. Stacey Abrams refused to concede because Kemp then controlled elections as Secretary of State and was accused of purging black voters from the voter registry to help his campaign for governor.

In the US Senate primary the incumbent Democrat, the Rev. Raphael Warnock, easily won and will face off against Trump-backed candidate Herschel Walker. The former football star has not lived in Georgia in decades but is running with Trump’s support, hoping to use his fame in leading the state university football team to a national championship in the 1980 season.

Did you find apk for android? You can find new Free Android Games and apps.
Share
Facebook
Twitter
Pinterest
WhatsApp
Previous articlePlaces of Worship Act 1991: Yet another PIL filed in Supreme Court against law
Next articleQuantum of punishment to Kashmiri separatist leader Yasin Malik to be pronounced today