UP govt says no to Kanwar Yatra due to COVID-19

Additional Chief Secretary of the Uttar Pradesh (Information) Navneet Sehgal said here that after an appeal by the state government, the Kanwar Sanghs accepted the government's decision to postpone this year's Kanwar Yatra. 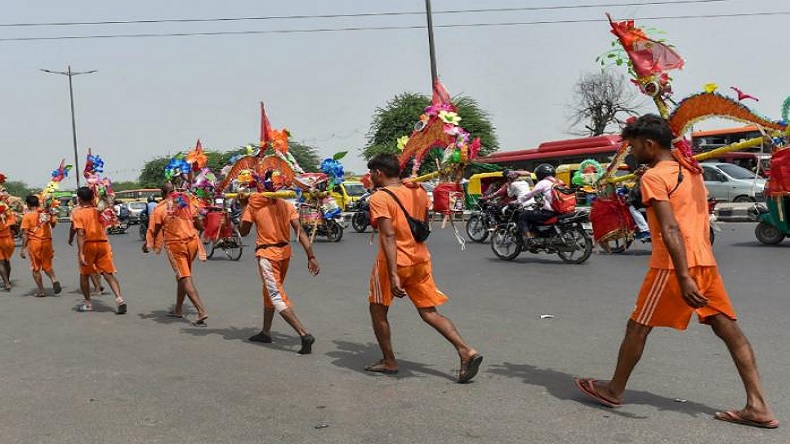 The Uttar Pradesh government on Saturday night decided to cancel the annual ‘Kanwar Yatra,’ after interacting with the Kanwar unions and also amid fears of a third wave of Covid-19 infections.

Additional Chief Secretary of the State (Information) Navneet Sehgal said here that after an appeal by the state government, the Kanwar Sanghs have accepted the government’s decision to postpone this year’s religious journey.

Last year, the Kanwar Sanghs had themselves postponed the traditional pilgrimage after talks with the government.  However this time, the state government wanted to conduct a token Kanwar Yatra, following the Covid-19 protocols. Since the Uttarakhand government banned the entry of Kanwariyas in the hill state last week, Uttar Pradesh was under pressure to follow suit.

Yesterday, the Supreme Court had issued notice to the Uttar Pradesh government and asked it to file a reply on the same by July 19.

“We are of prima facie view that it concerns all of us and it is at the heart of the fundamental right to life. The health of citizenry of India and right to life is paramount, all other sentiments whether be religious, are subservient to this basic fundamental right. As the right to live is paramount, all other rights of religion are subservient to this,” the bench of Justice Rohinton F. Nariman and Justice B. R. Gavai had observed.

“Article 21 applies to all and everyone has the right to live. We cannot allow the Kanwar Yatra at all,” it added.

CS Vaidyanathan, appearing for the State of UP, had said that it will submit an additional affidavit by July 19.

The traditional pilgrimage involves thousands of worshippers or kanwariyas trekking to the ghats of the river Ganga in Haridwar, Uttarakhand, filling their pitchers with holy water and offering it to Lord Shiva at a temple near their homes on Shivratri, usually in August, but on August 6 this year. The pilgrimage is largely taken up by the youth of Uttar Pradesh, Haryana, Rajasthan, Delhi and Uttarakhand.

Did you find apk for android? You can find new Free Android Games and apps.
Share
Facebook
Twitter
Pinterest
WhatsApp
Previous articleBritish era laws can’t be used to thwart dissent in a democracy: Justice RV Raveendran
Next articleA Judge must stand up against popular perception for justice: CJI Ramana