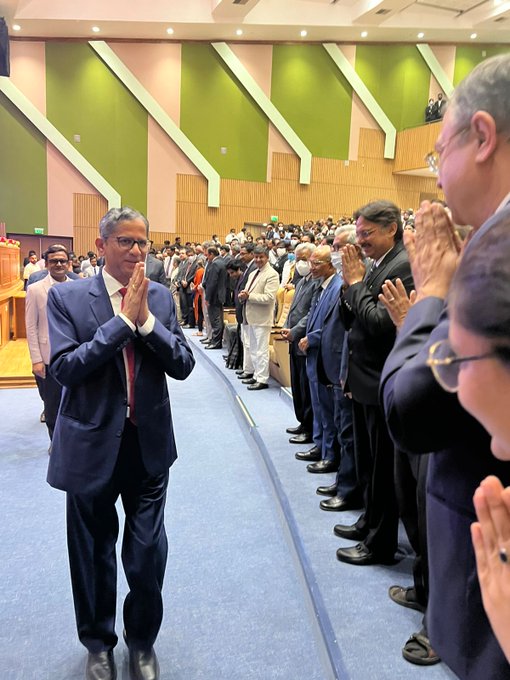 He said, “Justice NV Ramana worked significantly to change the face of the Hon Supreme Court for better. In the process, he has upheld the faith that the common man has reposed in the Apex Court.”

Dr Singh further said that people had high hopes from the new CJI (Justice U.U. Lalit) of taking this progression to newer heights.

He said the most important contribution of Justice Ramana made was filling up the vacancies of High Courts across the country, with more than 250 judges getting appointed, in addition to the appointing of 11 judges in the Supreme Court.

The former officer of the Enforcement Directorate (ED) further said the former CJI has always made it a point, during his career, to work for women’s rights.

Justice Ramana gave a ruling, equating household chores performed by a homemaker to that of her husband working in an office. His appointment of women judges to the Supreme Court and the High Courts was another testimony in this regard, noted Dr Singh.

He said a judge who rose from humble roots, the former CJI served the Apex Court for more than eight years. This was one of the longest time to serve, for more than two decades, both in the Supreme Court, and across High Courts.

Justice Ramana was a people’s judge, personified by his humility, showed respect to all advocates, irrespective of age, and pushed for the welfare of court officials. He worked for ensuring that the idea of justice was implemented in letter and spirit, noted Dr Singh.

He concluded by saying, “Best wishes for your future endeavours.”

Earlier in the day, he shared pictures on Twitter, stating that he was overwhelmed to attend the farewell function of Justice (retired) Ramana, who demitted office on Friday, organised by the Supreme Court Bar Association.

“Attended the farewell function of the Hon’ble CJI N.V.Ramana organized by the SCBA presided over by the CJI designate. It was a privilege to bid adieu to a CJI who was people centric in his approach and was a great friend of the bar.

“His humility, attitude and approach towards law are inspiring and worthy of emulation,” he added in another tweet.