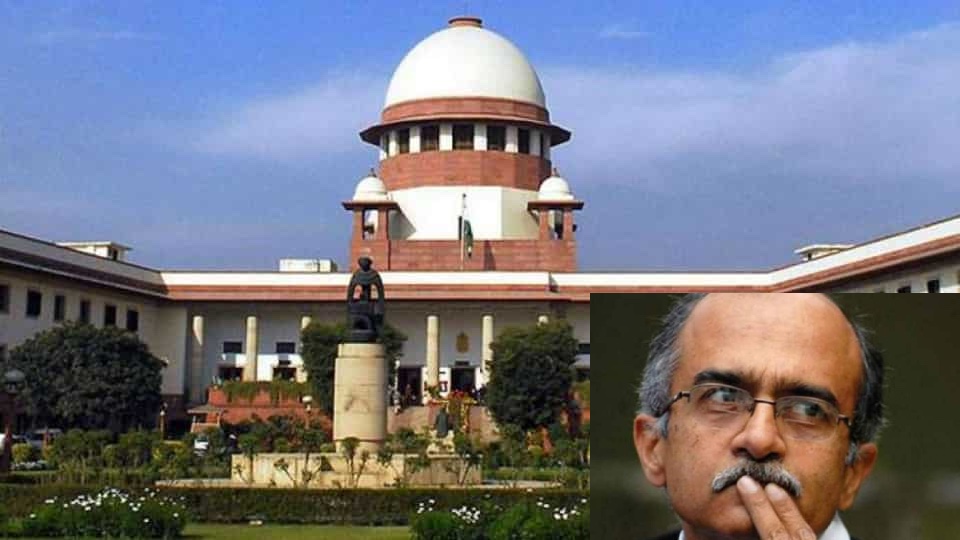 The Supreme Court today (July 22) issued notice to advocate Prashant Bhushan, asking him to show cause why criminal contempt proceedings will not be initiated against him for his tweets against the sitting Chief Justice of India S. A. Bobde. The next date of hearing of this case is August 5.

The bench, comprising Justices Arun Mishra, BR Gavai and Krishna Murari, has took note of a tweet which was made by Bhushan from his personal twitter handle on June 27 which reads: “When historians in future look back at the last 6 years to see how democracy has been destroyed in India even without a formal Emergency, they will particularly mark the role of the Supreme Court in this destruction, & more particularly the role of the last 4 CJIs.” Pic below)

The court has also received an application filed by Mahek Maheshwari, who has alleged that Prashant Bhushan had passed a remark tagging picture of the Chief Justice on Twitter on June 29 at 11.37 am saying: “CJI rides a 50lakh motorcycle belonging to a BJP leader at Raj Bhavan Nagpur, without a mask or helmet, at a time when he keeps the SC in lockdown mode denying citizens their fundamental right to access Justice!”

“We are, prima facie, of the view that the aforesaid statements on Twitter have brought the administration of justice in disrepute and are capable of undermining the dignity and authority of the Institution of Supreme Court in general and the office of the Chief Justice of India in particular, in the eyes of public at large,” said the Supreme Court.

“We take suo motu cognizance of the aforesaid tweet also apart from the tweet quoted above and suo motu register the proceedings,”said the Court.

The application has further alleged that a “tweet is of serious nature is putting a big question mark on the Sovereign Function of the CJI and their abiding nature to the Constitution of India.”

During the course of today’s hearing, Senior Advocate Sajan Povvayya, appearing for ‘Twitter’ submitted that Twitter has nothing to defend in these proceedings and it is ready to disable the contentious tweets if there is a court order to remove them.

Justice Mishra, however, observed that while the subject matter of the petition was a contempt petition against Prashant Bhushan, but the tweet was carried by Times of India.

The bench also issued notice to the Attorney General, seeking his assistance in the matter.

The bench further noted that the correct party here is Twitter Inc of California and not Twitter India. Hence, Twitter has been permitted to file appropriate application.

The bench has issued a show cause notice to Advocate Prashant Bhushan as to why a contempt proceeding not be initiated against him.

Maheshwari, in his application, has said that Bhushan had addressed the Chief Justice without using the word ‘Hon’ble’, despite being a lawyer. Moreover, the use of an exclamation mark in his tweet suggests his rude behavior.

He has also submitted that despite vacation, the Chief Justice and other Justices have been working and risking their lives at a time when the COVID 19 Pandemic is on a surge, so that citizens can get access to their fundamental rights.

He has further pointed out that during the hearing of Migrant workers case, Bhushan had cast aspersions on the Judges of the Supreme Court where while hearing, the Solicitor General drew the Courts attention over the same and Justice Kaul remarked “every time there is an order where you do not get relief, you insult the institution. You cast aspersion on the judges, you don’t have any respect for the constitutional bodies. You don’t have faith in the judiciary.”

Similarly Justice BR Gavai had also pulled up Bhushan, saying “if you don’t have faith in this institution, why should we hear you at all?”

He has alleged that the statements made by Bhushan are of the nature to incite feeling of no confidence amongst public in the proceedings of the Court and independent appearance of the Chief Justice which is covered by definition of Criminal Contempt as “scandalises the Court”.

According to him the Chief Justice had participated in a tree plantation function in Nagpur, where an Automobile dealer sent limited Edition CVO 2020 Harley Davidson where the photograph of Chief Justice was taken on which Bhushan had made the alleged derogatory remarks.