Home Opinion on News Cantonments: The Row over Roads 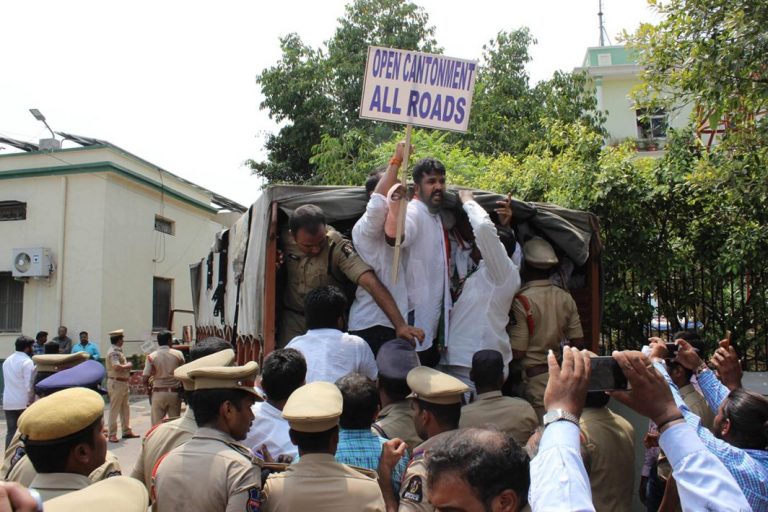 The word Cantonment is taken from the French expression Canton, indicating a Corner or District where winter quarters were established during a military campaign so that army formations could encamp and train. In such situations, the stay could be for a longer period than during ordinary tactical maneuvers. The French Canto, shares its etymological expression with the Swiss Canton.

In the study of evolution of mankind, there is no doubt that urgency of security and safety occupies a prominent place. It is even mentioned in the Maslows Theory of Hierarchy of Needs. As early as 3000 BC, civilizations in Mesopotamia and India were developed by the creation of small towns along rivers with fortified banks and high walls guarded by armed soldiers. The two-fold requirement of this fortified living enclosure was the protection of people and the wealth of the community.

This above concept manifested in various ways over time in the form of fortified towns and vast settlements well guarded by armed personnel who were also part of the society. As the process of European and specially British colonialisation grew, the phenomenon of development of Military Garrison or Cantonment grew in the Indian sub-continent (including Pakistan, Myanmar, Sri Lanka, Malaysia, Ghana, South Africa, Singapore and Nepal). The concept of Cantonment or Cantt was adopted by the British from the French Canton. When the British started developing settlements in India, these were of four types—the port cities, cantonments, hill stations and railway townships.

The port cities like Bombay, Calcutta and Madras, the various hill stations and the railway townships, also developed into cantonments due to security needs subsequently, and in the case of hill stations, the British officers and soldiers were stationed for considerable periods for health and specialised training. Another reason for building cantonments by the British was to make their officers, men and their families live in cleaner and healthier environments away from epidemics and other diseases.

The cantonments in India were developed in the first few decades of the 19th century and developed along the main routes at strategic places. The development of cantonments was directly proportional to the British military expansion and its need to control the conquered and occupied cities and integrate them into the colonial economic system. These cantonments gradually developed into flourishing settlements with accommodation for the officers of the Raj, native soldiers, and the camp followers including horses, camels and mules. Regular sadar bazars came up well segregated for the benefit of the colonisers but giving great impetus to socio-economic development, agricultural development, including military dairy farms. Famous convent and other schools came up followed by colleges and other teaching and sporting establishments which can still be seen all over India. With the passage of time, these camps became permanent and existed all along the sub-continent from North-east India to the border with Afghanistan, and from Srinagar to the southern tip of India.

The British brought out a special Cantonment Act of 1924. This Act introduced the representative local government system under which elected representatives of the civil population became members of the cantonment board. Since 1805, when the first of these military garrisons came up in Meerut, India now has 62 of these cantonments and a few military stations. Military stations are strictly for the accommodation of fighting forces, and their fighting equipment. Some of the famous cantonments are at Meerut, Allahabad, Jabalpur, Pulgaon, Agra, Pune, Bangalore, Delhi, Dehu Road Cantonment, Jammu, Nagarakot, Pathankot, Mathura, Mumbai, Chennai, Kolkata, Barrackpore, and many others. Besides housing and barracking of forces, these cantonments had very important ammunition depots, missile bases, armoured fighting vehicle depots, technical equipment, radar and aviation store depots and training establishment. All these not only require vast open spaces, but a great amount of security and privacy.

Very few realise that when cantonments were being set up, besides the requirement of military accommodation and storage for the fighting equipment and training of troops, there was a considerable requirement of a certain amount of exclusivity and privacy for the foreign coloniser. Hence, the location of these cantonments was created far out of the cities, practically in wilderness, where a common citizen never felt the need to go. But as industrialisation and population increased, towns grew even around the cantonment area. This generated the need for a common road traveller to penetrate the cantonment areas for the convenience of taking short cuts to save time. The clean and healthy surroundings of the well-maintained cantonment due to military management and discipline started attracting the public who naturally loved the beautiful environments, parks, clean and efficient markets, tight security and safe atmosphere.

This growth of population all around the cantonments, the highway infrastructure, the roads, the Metro right next to military equipment, fuel and ammunition depot is creating an exceptionally serious and hazardous situation and calls for immediate and a very urgent requirement—of distancing the ammunition stores and other explosives, even radioactive in nature, from the entire population by creating a sensitised belt of 900 to 1,000 metres all around. This requirement already exists in old SOPS and government orders.

In fact, this matter has been purposely ignored by vested interest for certain obvious gains, and have allowed town planners and builders to come right up to the walls of military establishments, with shops and hotels sharing the same wall with the military depot. The role of politically supported land mafia is a reason for many land scandals in Indian cantonments.

The matter is so serious that a certain missile storage depot, near Delhi, has a main highway right next to it, and as per the experts, the vibrations of the heavy traffic is constantly disturbing the fusing system of the missiles, thus posing a very serious and potentially disastrous situation for the civil population.

This phenomenon is common for a large number of ordnance depots around the nation now housing state-of-the-art weaponry and lethal missiles and other ammunitions. A case in point is that of the Shakurbasti Ordnance Depot in Delhi.

Keeping in view the developing security situations due to Taliban terrorists, ISIS threat and even threat from Naxals and Maoists, there is a very urgent need to review the threat to these military sensitive zones. This has been amply demonstrated by the Pathankot, Sambha, Nagarakot and many other attacks on these military locations.

This brings us to the recent development in Bangalore Cantonment, after which the government has ordered to open the cantonment roads for the public. Perhaps it is because of serious misinformation that most of us don’t know—that not only civilians are staying and having businesses in the various cantonments but most of the roads are open for normal communication except for a list of few very sensitive places where even the service personnel have to prove their identity. Civil population from all over can visit any market, shopping complex garden, etc except for sensitive defence areas.

As mentioned above, the presently deteriorating security scenario must be reviewed and stricter security and safety measures be introduced. This situation must be studied in the light of the fact that with the menfolk of defence cadre away from homes on various duties on the borders, their families become a very easy target for terrorist elements, as was seen in Nagarakot twice where the terrorist stayed for over five days shooting innocent women and children and similar incidents in other stations in Sambha and Jammu.

It does not require any great intelligence to make us realise that converting a military cantonment into a regular thoroughfare for commuters and allowing the public to loiter unchecked is a sure way of inviting disaster to happen. In fact, we are offering a very lucrative opportunity to ISIS and other terrorist organisations along with enemy saboteurs to have a field day.

This problem must be studied by an independent body made up of various station commanders along with their advisors, member of the various cantonment boards, security and sociological experts and the Ministry of Defence representatives. An independent report prepared with suitable recommendations needs to be broadcast in a transparent manner.

Lastly, no political party must be allowed to draw political mileage out of this issue and dishearten and demoralise the brave soldiers who only want a better understanding of their problems and the security of their families.