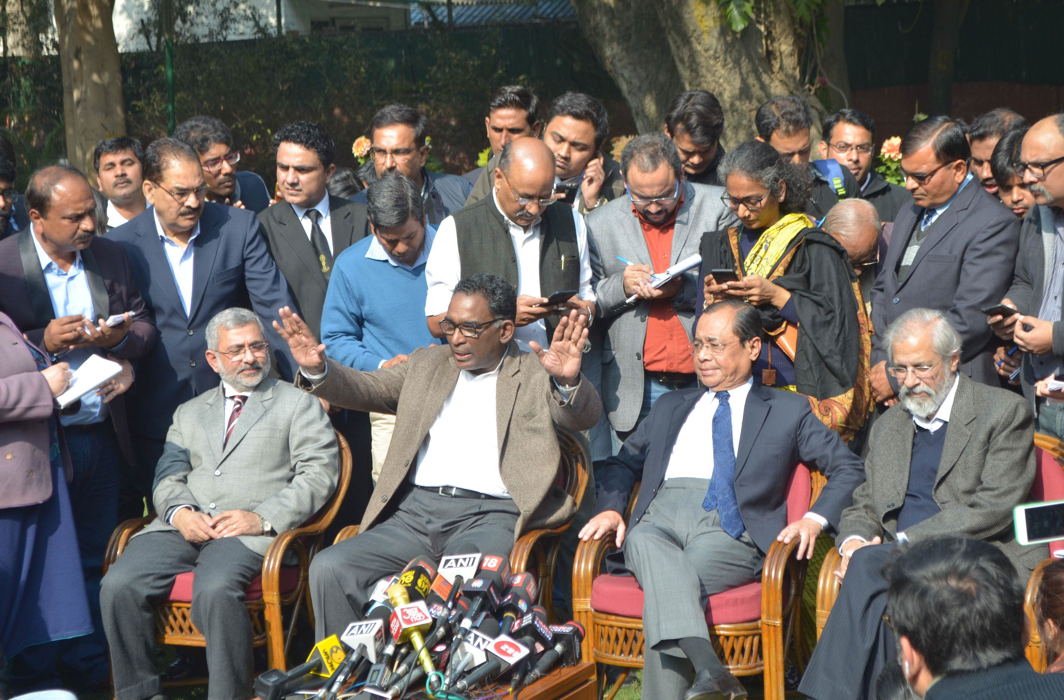 One of the most highly regarded retired senior civil servants of the country, MG Devasahayam believes that the fast-moving controversies surrounding the Supreme Court have placed the very institution of democracy in a serious predicament

In the second week of January 2018, four seniormost judges of the Supreme Court “paying their debt to the nation” and placing their case before the people made a poignant point: “We are all… convinced that unless this institution is preserved and it maintains its equanimity, democracy will not survive in this country.” And then: “We are left with no choice except to communicate it to the nation that please take care of the institution.”

The Supreme Court is an institution vested with enormous powers and prestige to uphold democracy and rule of law which is the raison d’etre of its very existence. India’s democracy is clearly outlined in the Preamble to the Constitution. It envisages for its citizens—justice, social, economic, political; liberty of thought, expression, belief, faith and worship; equality of status and opportunity; and fraternity, assuring the dignity of the individual and the unity and integrity of the nation. By implication, the four judges of the collegium allege that the Supreme Court has failed to defend and protect this democracy.

The demonetisation resorted to on November 9, 2016, was an “act of expropriation” by the government that spread a sense of fear among the people in general and the poorer/low-income segments in particular about the security of their livelihoods and money in the bank. This raised several critical legal issues—excessive delegation, lack of legislation, ultra vires of the Constitution, validity of the Reserve Bank of India’s “recommendation” and test of reasonableness. The Supreme Court maintained a stoic silence.

The Aadhaar project is another tool for an autocratic state. This became evident from the way the present ruling dispensation made a U-turn in its policy regarding Aadhaar and then went ahead with Stalinist ruthlessness to force the gullible public to obtain Aadhaar cards and link them to all conceivable services. In this process, the government committed a fraud on the Money Bill and repeatedly defied Supreme Court orders. The objective was to force the public to surrender their biometrics to the State for purposes that include surveillance and palming of the data. Yet, despite a clear and present danger to democracy and privacy and even after the Court’s historic verdict in August 2017 that the “Right to Privacy” is inherent to the Fundamental Rights themselves, the matter has been dragging on.

On the Judge Loya case judgment, this is what the former chief justice of the Delhi High Court and ex-chairman, Law Commission, AP Shah, had to say: “What in fact transpired is that the Supreme Court acted as a court of appeal, and granted a sort of an acquittal, without the benefit of the judgment of a trial court.”

The “Master of Roster” system, wherein all powers are given to one person, is also under challenge. Ac­tu­ally, the “raucous hearing” during which the five-judge constitution bench ruled that setting up of any bench is the CJI’s exclusive domain was marked by exchange of harsh words, heckling, brutal accusations of terrorising judges, forum-shopping, bench-fixing and repeated warnings of contempt of court. This has hurt the credibility of the Court in the public eye. Fear and anxiety are writ large on the faces of ordinary litigants.

Of late, the Supreme Court has been intolerant of inconvenient PILs under Article 32, once hailed by Dr BR Am­bedkar as “the very soul of the Constitution”. This Article gives citizens the right to move the Supreme Court in case of transgression of fundamental rights, thereby placing this Court as the protector and guarantor of freedom and liberty. Scorning it completely or allowing its pervasive misuse by vested interests in what critics say is “private interest litigation” dressed up as a public cause is negation of the Constitution itself.

The Supreme Court collegium’s move to defer its decision on Uttarakhand Chief Justice KM Joseph’s elevation to the apex court has heaped more controversy on this once-hallowed citadel of justice. When the collegium met in Delhi on May 2, the agenda was simple—to reiterate to the government its nomination of Chief Justice Joseph to the Supreme Court. But by not doing so, the controversy over the very independence of the judiciary has snowballed.

The first-ever impeachment motion against the CJI, its summary rejection by the vice-president, the resulting challenge, the drama thereof and the discourse that followed have virtually converted the Supreme Court into a political battleground which does not augur well for governance.

The last time the very institution of the judiciary came under a cloud was during the Emergency in the mid-Nineties when democracy stood extinguished through a presidential proclamation under Article 352 of the Constitution. I was then the district magistrate of Chandigarh and custodian of Lok Nayak Jayaprakash Narayan (JP) who was incarcerated in a spe­cial ward in the Postgraduate Institute of Medical Education and Research, Chandigarh.

It was JP who raised the issue of the Supreme Court’s role in endorsing the extinction of democracy and sustaining the totalitarian rule of Mrs Gandhi and her coterie. He had urged the then chief justice of India, AN Ray, not to sit on the bench to hear Mrs Gandhi’s appeal against her disqualification by the Allahabad High Court as he was “obliged to the prime minister for appointing him” by superseding three senior judges.

JP’s apprehensions proved right. Mrs Gandhi’s appeal came up before the Supreme Court on August 11, 1975. In preparation thereof, on August 5, Parliament amended the Representation of the People Act. There were six amendments, the most prominent being grant of immunity to the PM’s election from being challenged in a court of law. State assemblies were convened on August 8 and 9 to endorse the amendment of the Constitution rendering the elections of president, vice-president, prime minister and speaker of the Lok Sabha non-justiciable.

As I narrated these during my meeting with JP on August 6, he almost broke down and wailed: “Democracy is finished completely.” After a pause, he said: “At least for the present.” JP added that everything had been manipulated and there was no hope left in the Supreme Court!

The accuracy of JP’s prediction is narrated by Nayantara Sahgal in her book Indira Gandhi’s Emergence and Style. She wrote: “The essence of Emergency was the pinnacle of power, a position above the multitude, unaccountable and unchallengeable, it sought to guarantee the prime minister. This was accomplished by three amendments to the Constitution and an Act of Parliament. The 38th Amendment put the declaration of Emergency beyond the scrutiny of the courts. The 39th Amendment made election disputes relating to the prime minister, president, vice-president and the Speaker non-justiciable. This wiped out the Allahabad High Court judgment with retrospective effect. On 7 November, 1975, a five-judge bench of the Supreme Court upheld the amendments and Indira’s 1971 election to Parliament.”

Chief Justice Ray had repaid his debt to Prime Minister Indira Gandhi, but at what cost?

Under Chief Justice Ray’s watch, the Supreme Court went far beyond and ruled that under Emergency, citizens have no right to invoke Articles 32 and 226 of the Constitution to defend their fundamental rights and stopped just short of declaring that they do not even have a “right to life”.

All these sounded the death knell of freedom and liberty and were restored only through the will of the people in the early 1977 elections.

Since those tumultuous days, democracy has been limping along and in recent years is again in dire danger. There is a new norm—“Governance by Fear!”—which is reminiscent of the Emergency, most people are moving in hushed silence, not sure who will protect their freedom and fundamental rights which are constantly under assault from a despotic State. Today, a strong and independent judiciary under the guidance and leadership of an unassailable Supreme Court is the only institution which is empowered constitutionally to remove this sense of trepidation and despair. The country’s democratic fabric, the strength of the constitution and the rule of law are once again under a severe test. The jury is out!