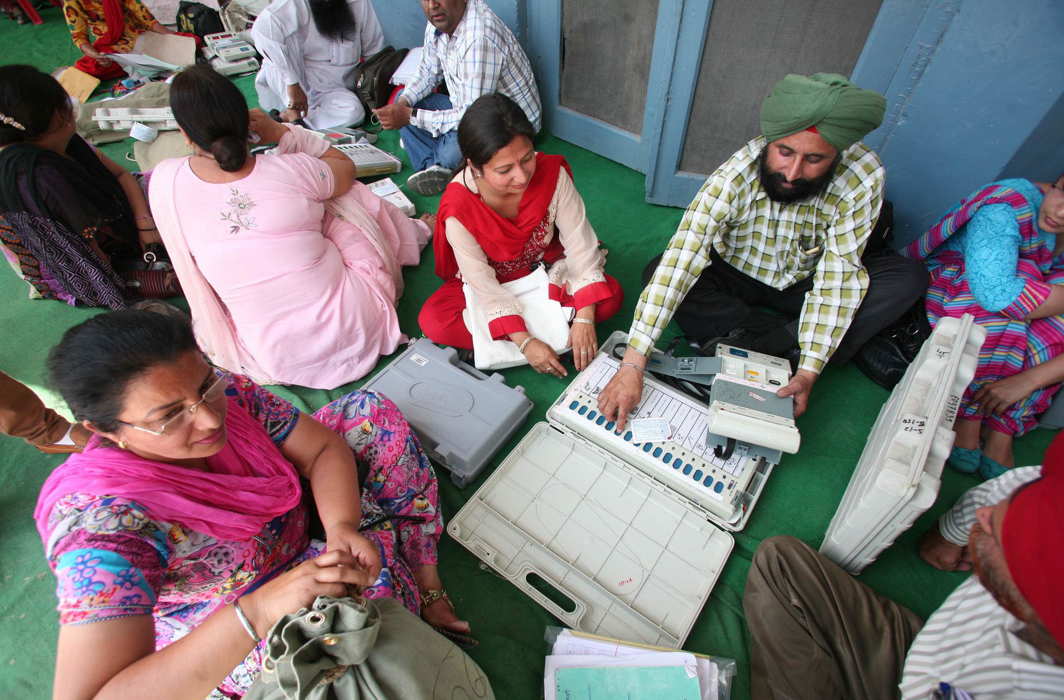 Above: A poll official explains the working of an EVM to his colleagues in Amritsar/Photo: UNI

Despite demand for paper ballots and tampering claims before various High Courts, the fact is that they are sound devices which have stood the test of time for two decades

The controversy over Electronic Voting Machines (EVMs) and by extension, Voter Verified Paper Audit Trail (VVPATs), continues to wax and wane. Recently, 17 political parties, some even the most unlikely of allies, planned to write to the Election Commission (EC) to push for paper ballots in the general election next year. Every time this discussion is held, EVMs are blamed. It is significant that distinction is made between VVPAT malfunctioning and EVMs. The repeated controversy undermines the credibility of EVMs and casts recurring doubts in the minds of voters.

Every political party has questioned EVMs at some time or the other, but has chosen to keep quiet when it wins election victories with the same machines. They miss the fact that if a ruling dispensation could tamper with EVMs, there would have been no change of regime in the country ever.

The latest round of objections to EVMs started due to malfunctioning of some VVPATs in by-elections where re-polling was ordered. This included 73 booths in Kairana (UP), 43 in Maharashtra and one in Nagaland. The EC’s response was that the machines stopped due to direct exposure to the sun due to which their sensors malfunctioned. The Commission also acknowledged inadequately trained and inexperienced staff.

A discussion about the functioning of VVPATs can give us some insight into the possible problems associated with it. These machines are independent printers attached to EVMs. When a button is pressed on the EVM, it is visible to the voter through a glass window for seven seconds. The VVPAT prints a slip of 99mm length, which contains the name of the candidate voted for and his election symbol. The slips can be counted by polling officers if required to tally with the votes registered in the EVMs. There are no invalid votes as there are no manual stamps involved as in paper ballots.

It is noteworthy that while EVMs are solid state machines, VVPATs are electro-mechanical devices. They have moving parts and are, therefore, more vulnerable to malfunctioning. The analogy is a calculator (solid state) and a computer printer (electro-mechanical). While the former functions well for years, the latter keeps giving problems. EVMs have been employed in all Vidhan Sabha elections since 1998 and in all Lok Sabha elections since 2004. Tampering claims have been made before various High Courts—Madras HC (2001), Delhi (2004), Kerala (2002), Karnataka (2004) and the Nagpur bench of Bombay HC (2004). All aspects were scrutinised and these Courts accepted the EC’s stand—that EVMs are tamperproof, sound and credible devices.

They have stood the test of time for two decades.

In 2010, the Election Commission called an all-party meeting in which it was decided that introduction of VVPATs be examined. The Independent Committee of Technical Experts was asked to examine the possibility in depth. The two manufacturers—BEL and ECIL—were asked to design a prototype which was thoroughly scrutinised by the Expert Committee.

After extensive trials, a full-day field trial was conducted in July 2011 in five cities with different climatic zones—Kerala for coastal conditions, Jaisalmer for desert, Leh for cold temperature of the mountains and Cherrapunji for the rainy region, besides Delhi. This was done in the presence of all the relevant stakeholders, including political parties as well as members of civil society. It was found that the machines were prone to serious problems such as jamming of printers, battery overload, etc.

After the Technical Expert Committee’s suggested design improvements were incorporated, the trials were repeated in the same five places in July 2012. Thus, the latest controversy over heating and light issues are worrying as the test locations were diverse.

The EC is unequivocal in its stand about the efficiency and usage of EVMs and VVPATs. Both serve to remove doubts from the minds of the voters regarding the vote cast by them. A 2013 directive by the Supreme Court (Subramaniam Swamy vs. EC) supported the EC’s initiative and directed the centre to release adequate funds for procurement of these machines for subsequent elections, leading up to the general election of 2019 which will be conducted entirely with VVPATs.

A frequent argument used to delegitimise the entire process is how it has been withdrawn in western democracies. Four prominent examples are given—France, Germany, Italy and the Netherlands. But what is left out is that in all of the above cases, the EVMs procured were from the same Dutch manufacturing company and so glitches were similar. So the manufacturer should be blamed, not the process.

In the case of Germany, the challenge was legal, not technological. The German Constitution provides for transparency in voting, and one can’t physically see where the vote is going inside the EVM. Our own Supreme Court had taken a similar decision in India 27 years before Germany and Section 61A was inserted in the Representation of the People Act, 1951 to take care of this legal lacuna.

The present issues with VVPATs have some simple solutions. The buck certainly stops at the electoral body which is the bastion of credibility and must remain so. The EC should constantly reassure the public about the safety and verifiability of election systems and should be quick to reject every random allegation. During elections, the staff should be adequately trained and be quick to respond in cases demanding replacement of the machine. Robust and adequate booth staff can ensure that there are no delays in voting.

At present, only one VVPAT per constituency is counted. This should be increased substantially, to, say, 5 percent. As for the possible delay of declaration in results, more manpower may be deployed. Some suggest that polling booths should be chosen in such a way as to include areas where the turnout is either too high or too low, and those that contain a significant portion of disadvantaged classes and minorities. This is indeed a constructive suggestion.

I remain confident that it is not without reason that India remains a gold standard for other democracies when it comes to robustness of its electoral systems. Malfunctioning of EVMs due to weather has to be sorted out.

The EC has clarified that it will receive an adequate number of EVMs and VVPATs by November-end this year. But last week, it was reported that as on June 19, 2018, only 22 percent of the required number of machines were received. In an RTI reply, it was revealed that the delays were being caused in manufacture and procurement due to design improvements. This is cause for worry. The Commission remains confident that it will possess all the machines by the last quarter of 2018 itself. This is important for the EC to ensure.

Very often, it has been asked why EVMs are not being used even in neighbouring countries. Bhutan uses Indian machines from the beginning. Nepal had experimented with them, but ended in not scaling-up. However, they have not given up on it. Pakistan has been debating it for nearly a decade. Its CEC visited India in 2010 and later to study the functioning of EVMs and has had many demonstrations of different types of machines ever since. They have, however, not been able to clinch the issue due to a lack of consensus among political parties.

India, meanwhile, continues to lead from the front.