The recent letter to Justice CS Karnan from senior advocate Ram Jethmalani questioning his conduct was uncalled for. One wonders what the result would be, if any lawyer or an ordinary citizen had written such a letter to any other high court judge

The Justice CS Karnan case has stirred the legal community like no other. It has not only made the bench jittery, starting from the lower judiciary to the topmost office of the country, but has also generated huge interest among advocates and even the general public. The idea is to wait and watch how the judiciary deals with one of its own; whether the law actually applies to all, equally.

This is a constitutional issue. Incidentally, it must be remembered that there is no overarching mechanism that oversees the actions of the bench at the top level, starting from the High Court and upwards. The mechanism to handle issues at this level is to be handled through an impeachment process that is complicated and time consuming. It was beyond the comprehension of the writers of the constitution that such an issue would grow out of a system that was formatted and put in place with huge powers of oversight over the rest of the system.

While there have been others who have faced impeachment due to corruption, Justice Karnan’s is a unique case which isn’t about corruption, but about indiscipline and insubordination. 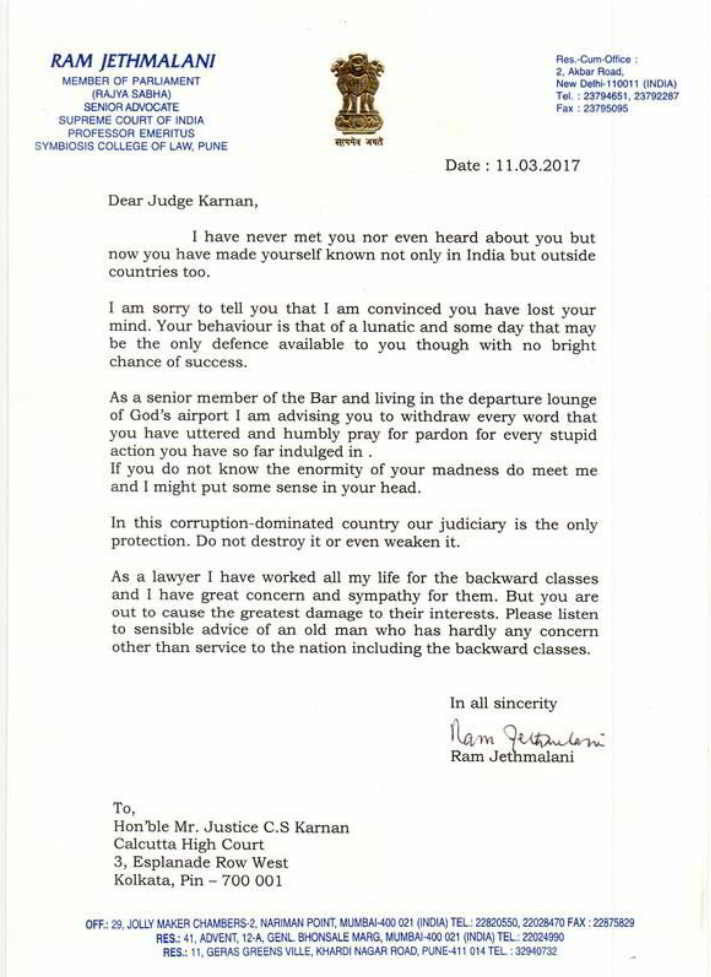 The recent outburst of senior advocate Ram Jethmalani, in an open letter to Justice Karnan (see picture), is a case in point. It is a letter that, under normal circumstances, would have been taken as an affront to the judiciary and would have called for censure from the bench. No reaction is, so far, available from the bench on this letter.

The letter in itself was totally uncalled for, because as Jethmalani himself has admitted, “I have never met you nor even heard about you…” but then he goes on to say: “I am sorry to tell you that I am convinced you have lost your mind. Your behaviour is that of a lunatic and some day that may be the only defence available to you though with no bright chance of success.”

One would wonder what the result would be, if any lawyer, of whichever standing, or an ordinary citizen for that matter, had written such a letter to any other high court judge of the country. Would not contempt proceedings be brought against that lawyer?

Jethmalani also says: “…humbly pray for pardon for every stupid action you have so far indulged in.”

This has to be studied in three parts. First, the law-abiding citizen would like to see how the judiciary deals with one of its own, and how it provides even a judge a fair trial. Can a Judge—or any citizen for that matter—be declared a law-breaker because he/she refused to appear for a contempt hearing? If so, then the law is being justly and equally embalmed.

Secondly, would not Justice Karnan be deemed innocent till proved guilty? If at this point nothing has been proved against him—certainly no crime—how was it possible for a senior lawyer to cast serious personal aspersions on a member of the bench? This is not to condone the actions of the judge in question (Justice Karnan), but to question the action of a lawyer, who is no more a civilian as any one of us, even if he is attached to the judicial system.

And third, if discipline is a matter imposed only on non-judicial civilians, then would the constitution condone that act? What is the mechanism of redress available to the ordinary citizen in the case of an emotional outburst following a judgement that he or she or his or her family fails to comprehend and/or feels has not been fair? Does the accused have access to redressal, other than approach a higher court, which involves cost? If not, should Jethmalani be so unique a human being that his letter can be overlooked?

This brings to mind the call for contempt of Justice Markandey Katju. Not only is he a former Judge of the Supreme Court, he is also the former Chairman, Press Council of India, both extremely authoritative positions. He has been known to be outspoken, a trait that got him in trouble.

In the Soumya rape and murder case—where the culprit Govindachamy assaulted and then raped the 23-year-old in the empty ladies coach of a moving train before allegedly pushing her off the train, killing her—the Supreme Court had refused to give capital punishment to Govindachamy. It upheld its life sentence instead, overturning the Kerala High Court’s death sentence of 2013.

The incident was almost as gruesome as the Delhi Nirbhaya case, though the assailant was just one, but the issue of his pushing Soumya off the train could not be proved. That was the primary reason why the Supreme Court stopped before capital punishment.

The judgment created heartbreak in Kerala and Justice Katju said in a Facebook entry that the apex court had “grievously erred” by not imposing death penalty. Katju said it was “regrettable” that the court had not read Section 300 carefully.

On October 2016, the apex court summoned Justice Katju and issued a contempt notice for criticizing the judge and not the judgment. To this Justice Katju had said: “Mr (Justice) Gogoi don’t threaten me. Do what you want. I am not scared.”

The incident got serious when Justice Katju kept reminding the Judge (Gogoi) that he (Katju) was senior to him. At one point, the bench called for security, saying: “Is there anyone to escort Justice Katju out of court?”

In January this year, Justice Katju had to submit an unconditional apology to the court at which contempt proceedings were dropped.

If that was the case of a former Supreme Court judge, casting personal insults on a sitting high court judge might be considered a serious case, especially when the judge in question is yet to be proven guilty of any crime other than contempt of court.

How does advocate Ram Jethmalani stand?