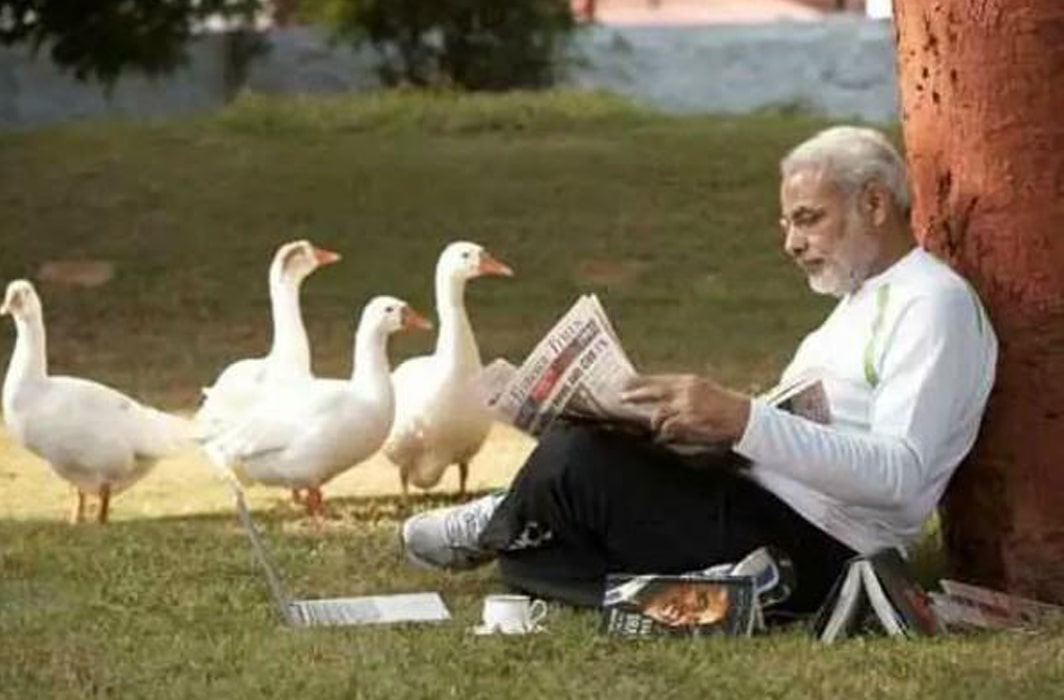 One would imagine that celebrities, film stars and super models whose careers depends on how they come across in front of the camera, would be masters and mistresses of the photo-op. The truth is that they can take a lesson, or ten, from today’s politicians. For politicians, the photo-op (short for photo opportunity) is an essential, increasingly invaluable, weapon in their arsenal; whether inaugurating public projects, mingling and handshaking various sections of the voting public, lifting up babies and meeting children, hugging victims of disaster and loss and rubbing shoulders with world leaders. The best use of the photo-op is by using it to make a statement showing empathy, masculinity, wisdom, intellectual depth and/or in tune with contemporary trends and technology. Social media with its instant impact and enormous reach has made it an even more effective weapon.

The latest example we have are the visuals of Prime Minister Narendra Modi feeding peacocks (the national bird) from his hand, and posing with house-trained ducks while sitting under a tree in his sweatpants surrounded by symbolically appropriate props. They included an Apple MacBook (tech-savvy), a newspaper (tracking current news), and two books, one on ex-US President Barak Obama and Cold Steel by NRI billionaire Lakshmi Mittal, were placed with their covers artfully showing (intellectual depth and curiosity). The image, as intended, went viral and attracted a huge amount of attention and compliments, but also criticism from the Opposition and media analysts. In the end, the object was served: an opportunity to burnish the image through a single-staged photograph.

It’s a ploy used by politicians worldwide, but it can backfire as well. Donald Trump staged his own photo-op recently, which turned into a photo-Oop!, when he walked across from the White House surrounded by armed riot police firing tear gas shells, to a nearby church where he held up a bible, upside down as it turned out. He was clearly appealing to the Christian Right, his political base, but it also received brickbats and condemnation. The American Bible Society issued a statement declaring: “We should be careful not to use the Bible as a political symbol, one more prop in a noisy news cycle”.

That’s a telling statement: Any leader of a country, whatever he/she does, is considered newsworthy and the opportunities for photo opportunities are much greater than for anyone else, more so in what is now the new normal—a noisy news cycle.

For male leaders who want to show that they are in charge and capable of handling situations, a show of masculinity makes for appropriate photo-ops. In Belarus, as thousands of protestors take to the streets to demand that autocratic leader, President Alexander Lukashenko, step down, he is photographed wearing a flak jacket and carrying an assault rifle, a show of defiance and a message that he will not go without a fight. His supporter and neighbour, Russia’s President Putin regularly has himself photographed in macho poses—bare-chested on horseback, throwing opponents in a judo class, fishing in a river or firing weapons in a shooting range. Those are the kind of images that appeal to all his male supporters and probably Russian women too. In North Korea, the world’s most secretive society, leader Kim Jong Un is seen riding a white horse to a sacred mountain in an evocative propaganda stunt—he does this each time there is a military crisis with the US or South Korea as a message to his people that he is blessed by a higher power.

We see the opposite imagery by leaders who want to project empathy and compassion. New Zealand’s Prime Minister Jacinda Ardern uses frequent Facebook Live chats that manage to be both informal and informative. In one, she appeared in a used sweatshirt at her home, saying she had just put her newly-born child to bed. A child’s toy was visible just behind her desk. It was just the image that has made her so popular: a world leader in casual clothes chatting with millions of people, as a mother, friend, confidante and counsellor.

For other VIPs, the photo-op is the most effective way to show their concern for the public but it comes with drawbacks. In Tamil Nadu last year, an unprecedented water crisis required water to be transported from outside by a special train. A gaggle of ministers alerted media channels that they would be there to meet the train. The train arrived on time but the ministers didn’t. The photo-op turned into a PR disaster when the media informed the public that their water supply would be delayed, because the ministers were late.

Then we had the Chief Justice of India, SA Bobde, who succumbed to his private passion for high-end motorcycles when he posed for a photo astride a Harley Davidson with some others in the frame, and unforgivably, not wearing a mask. It became the subject of one of the tweets by Supreme Court lawyer Prashant Bhushan, which led to the recent case against him.

In an article in The New York Times, the author wrote that “the underlying strategy of photo-ops is the same as that of most ads: pose the candidate (or the product) with symbols of appealing values, in the hope that viewers will equate the two”. Leaders like to be seen in places that ordinary people frequent—restaurants, pubs, public transport, or as former US President George Bush was doing when the planes hit the twin towers on 9/11—reading books to children in a classroom. Those PR moments can be rewarding, or hugely embarrassing. UK Prime Minister Boris Johnson, as mayor of London, was highlighting Olympic attractions across the capital followed by a posse of photographers when he was persuaded to ride a newly installed zip line. It was an ideal photo-op and Johnson climbed a tower, allowed himself to be strapped into a harness and, with a plastic union flag in each hand, he set off. Unfortunately, the zip line stuck and he found himself dangling in mid air, looking like a circus clown, described by one accompanying reporter as “a damp towel hanging on a clothesline”. The fact that he went on to be elected PM, shows that photo-ops, good or bad, are now part of every politician’s playbook.

Did you find apk for android? You can find new Free Android Games and apps.
Share
Facebook
Twitter
Pinterest
WhatsApp
Previous articleStudents in flood-hit areas of Vidarbha can apply to NTA for a re-test
Next articleSC asks Patna HC to consolidate, transfer all Tablighi cases to one court