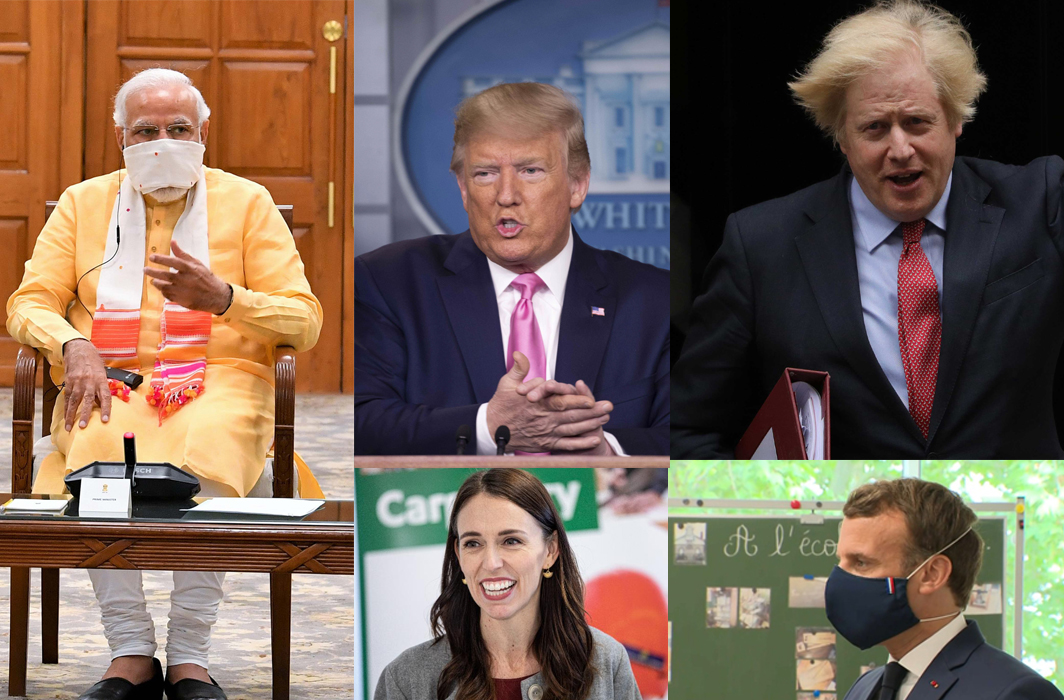 It has become the most visible symbol of the ongoing pandemic, the humble mask which now comes in all shapes, sizes and price points, including branded designer ones. While it can hide much of an individual’s face and expression, it also reveals a lot, judging by its use, misuse, and non-use by world leaders. Japan’s Prime Minister Shinzo Abe is always seen in one, as is Greece’s Prime Minister Kyriakos Mitsotakis. French President Emmanuel Macron boasted a small French flag on his while Slovakia’s president made a fashion statement by sporting a fuchsia-coloured one to match her outfit. Germany’s Angela Merkel and other European leaders prefer to wear or not wear a mask depending on the occasion and the audience. Many analysts suggest that it shows a level of indecisiveness, or leaders who are not quite sure what policy to adapt when it comes to lives and livelihood.

In that sense, more than a fashion statement, the mask has also become a political statement. Donald Trump refuses to wear one, even when in close proximity to others, and Brazil’s president Jair Bolsonaro, who referred to Covid-19 as the “little flu,” generally does not wear a face mask while out in public. Trump says that wearing a mask is a personal choice, and told reporters he was “choosing not to do it” and his vice-president Mike Pence, has generally followed suit. Britain’s Boris Johnson, having recovered from a stint in hospital after he was infected by Covid-19, has also avoided wearing a mask while addressing the media outside Downing Street. An article in the Guardian said this: “Putin, Boris Johnson, Jair Bolsonaro and Donald Trump are all very different politicians. But all have had one thing in common in their responses to the coronavirus: a belief or suggestion, at least in the early stages, that taking personal protective measures against the virus is somehow unseemly and at odds with their macho political brands.”

The classic counter example was New Zealand Prime Minister Jacinda Ardern, who avoided use of a mask to show her country was Covid free. In contrast, India’s prime minister, who inspired Modi masks at his rallies, is never seen without one, even when he is giving a televised address with just a Doordarshan cameraman present, and presumably at a safe distance.

Political analysts and psychologists see wearing of masks, or not, as a political statement—in Trump’s case, he is pandering to his right wing supporters who have little time for science and prefer the macho look and bluster over caution and practicality. Leaders who don’t wear mask are signalling that they think fears of the virus are overblown while those who do are conveying to their citizens that this is a serious disease and they are projecting empathy and a belief in science. In America, one political website wrote that “wearing a mask is for smug liberals,” and “refusing to is for reckless Republicans.” Stripped of its partisan divide, masks do indeed reveal more than they conceal. In the case of Modi, the message is clear. He has shed his macho, 56-inch chest-thumping to convey that he is now in sensitive mode, attempting to portray in public what he wants the public to do—take all precautions to avoid spreading the infection. The idea, as some suggest, is to show that he has a softer side and cares about his countrymen in the face of the huge migrant and unemployment crisis.  The problem is that he is also at risk of coming across as less decisive and manly, as has been the objective of his image-makers till now. That has also been counterproductive, with the Congress party going after him for his pregnant silence on Chinese aggression and the provocation from tiny Nepal. As many leaders are realising, the mask is off, even when it’s on.

Did you find apk for android? You can find new Free Android Games and apps.
Share
Facebook
Twitter
Pinterest
WhatsApp
Previous articleIn Response To TOI Story, SCBA Clarifies There Is No Compulsion On Rich Lawyers To Make Donations
Next articleMP HC Grants Anticipatory Bail To Persons Accused For Abetment Of Suicide